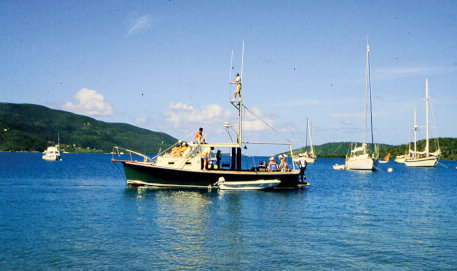 An old trustworthy favorite will be back anew this fall. The Reef Sampler, the Bitter End Yacht Club’s (BEYC) 1968-purchased, 34-foot Maine-built fiberglass ‘lobster’ boat, which sank in 2017’s Hurricane Irma, has been found, refloated, renovated, and will be ready for the British Virgin Islands-based sailing resort’s comeback in November 2021.

Reef Sampler was the workhorse of the BEYC transporting crew members and guests on countless journeys. On September 6, 2017, she was on duty, lying to the resort’s stoutest mooring, and the only of the Club’s vessels not hauled out for the coming storm. After Irma passed, she was nowhere to be seen. Parts of the Reef Sampler’s superstructure were found on Prickly Pear, but it wasn’t until Her Majesty’s Hydrographic Office conducted its first BVI survey since 1926, that the sonar operator located a sunken vessel in the BEYC’s mooring field. The team at Sunchaser Scuba, who maintain the field, dove and found Reef Sampler still attached to her mooring, yet both were on the bottom of North Sound.

“There was no way that we could abandon the most senior and revered member of our fleet where she lay, virtually intact. Salvage plans were drafted. Using airbags, Sunchaser refloated and beached her at Bitter End’s South End to await her debut as a star of BEYC 2.0 and its second-most senior cast member, after me,” recounts BEYC owner, Richard Hokin. beyc.com