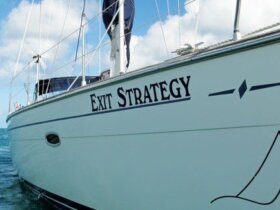 Boats in Paradise: The Beginning

The world of anti fouling has been turned upside down a number of times in the past years and this has caused great difficulties to consumers in trying to understand the options that they have. This is compounded by the region (or tropical) specific nature of the products that are suitable.

Anti Foulings in the Caribbean

The anti foulings that are effective in the Caribbean are not marketed in many other places because the need for this level of fouling protection is not present. As a result, you can go to boat shows in cooler climates and have salesmen assure you that their product will be effective, because they do not have the experience of the rapid growth that we experience in the Caribbean. The manufacturers’ web sites also generalize about anti fouling performance and do not deal with the specific problems we have in this area. The first advice to consumers must, therefore, be—listen more to Caribbean sources than to non-Caribbean sources when listening to advice on anti fouling.

This was a very effective biocide that was fundamental to the success of the best anti fouling paints. Amongst the first products to be successful with this was Sigma Plane which was followed by Proline, Horizons, and Micron 44. The Proline was a copy of the Micron 44, and their business (and formulation) was taken over by Seahawk who marketed it as Islands 44.  These paints were very effective in the Caribbean and created expectations that still remain. Unfortunately, the tin is an environmental hazard and international agreements have been made to halt production. Many countries have banned its use, but many in the Caribbean have not passed such legislation, thus allowing the option for continued sales. At this time, the tin-based product is only available from Sea Hawk, who continue to have some access to the tin for the moment. Even before the tin was no longer available, the major paint companies agreed to discontinue selling the products and moved their sales to alternative formulations.

The complete ending of tin in the market is likely to come soon. In some jurisdictions like the USVI, this has already happened. In those markets, newer formulations have already proven that the formulations which are based on “hydrolysis” can be just as effective as the tin based paints. The leading product in this regard is Micron 66.  Our tests show that this product is very close, if not better, in performance to the tin based paints.  One shortcoming of the hydrolysis paints is they only perform in salt water so that if the water is brackish or sweet, the anti fouling characteristics stop working immediately.  On the other hand, in the summer months when the salinity content is high, they are working particularly well.

The new hydrolysis paints depend on a limited number of formulations which are owned by Japanese companies and whose cost is greater than the older paints. This put the pricing of the new paints abruptly higher than what the old tin paints used to be. On top of that, the price of copper increased substantially with the result that Caribbean list prices of the most-used paints have gone up very substantially.  Whilst a few years ago, the Caribbean–suitable paints were hovering around the USD $150 mark, they have now gone up to around USD $230 (prices per US gallon).

There are some manufacturers who are marketing the hydrolysis paints at a substantially lower cost, being Sea Jet  (Chogoku) and Jotun, who are major international paint companies owning patents that are applicable—and who are looking to develop market share in the Caribbean market. There are also alternative solutions to the anti fouling like copper cladding and foul release systems (usually silicone based)  that are much talked about but have not got a foothold in the Caribbean.

Robbie Ferron is the founder of Budget Marine

J. Summer Westman spent the last several months interviewing and researching the different companies with Marine Bottom Painting products to offer you a step-by-step independent application guide based upon our research. Please note… Our research is geared towards the Caribbean region which is considered one of the harshest regions for bottom growth.

Additional Insights into Anti-fouling in the Caribbean by Robbie Ferron