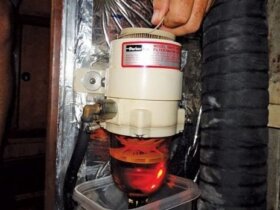 In response to this series, Bottom Paint and Your Boat, paint manufacturers have been in touch with us to advise that they have new anti-fouling products on the market.

Sea Hawk Premium Yacht Finishes has introduced a TBT-free anti-fouling paint called Biocop Tin Free (TF). According to their research, Biocop TF out-performs the old tin-based paint, which is very good news for boaters. Jason Revie, VP Sales and Marketing, states, “Biocop TF is a non-restrictive anti-foulant, so every boater can have the best quality anti-foulant paint on their vessel, regardless of size.” Sea Hawk has also developed a “copper-free, nano-based technology” for their Mission Bay line of paints. However, Sea Hawk plans to continue to manufacture tin-based paints and sell them in the Caribbean and other locations.

Petit Paints has introduced Vivid, a TBT-free, brightly colored anti-fouling paint that is available in six colors that can be mixed to create a variety of hues. Vivid is a dual biocide antifouling, suitable for multi-season use. A hard ablative that will wear away slightly over time, Vivid is best suited for race boats, or those that are stored on a trailer or in a rack. Vivid can be used on aluminum, fiberglass, wood and steel.

Interlux’s newest products include Micron 66, a TBT-free, self-polishing copolymer technology for use in salt water; Trilux 33, a TBT-free bottom paint specially formulated for use on aluminum boats, outdrives and outboards (and which can be used on fiberglass); and a TBT sealer, designed for use when converting from a TBT-based antifouling paint to either Micron 66 or Trilux 33. Interlux has also introduced a TBT-free aerosol antifouling paint for use on aluminum outboards and outdrives.

Erik Norrie, CEO, New Nautical Coatings, Inc., Sea Hawk Premium Yacht Finishes, brought up an industry concern regarding the reduction in use copper- and tin-based anti-fouling paints: the possibility of increased incidents of marine invasive species – “alien” marine life that hitches a ride in the biological fouling on the bottom of boats or in a vessel’s ballast water and winds up in a new home where, if it can establish itself, does harm to indigenous marine life.

Research indicates that ship’s ballast water is considered to be a major pathway for invasive species. While this is recognized as an ongoing, world-wide problem, according to the Caribbean Environment Program, “Little is known or documented on the status of marine invasive species in the Caribbean beyond a few instances [the green mussel being one].” That report goes on to state that it was difficult to determine whether newly reported marine species were aliens or if they were indigenous and had just not been noticed before.

This is not to say that biological fouling on boat bottoms does not provide a safe haven for marine invasive species – it does. A study from the Global Invasive Species Program reports that cruising yachts “have the potential to become infected and inoculate several locations in a single cruise.” Harbors world-wide are beginning to implement hull inspection and quarantine procedures, with Australia being the first country to utilize the law to prevent bio-fouling. All the more reason to keep the bottom of your boat sparkling clean!

Fall Cruising Update: The Caribbean, with its warm sunny climate, blue seas and steady tradewinds, continues as a big draw for winter cruising