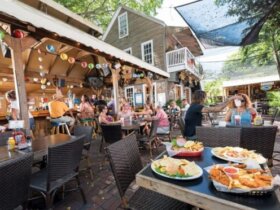 In the Caribbean, Santa is more likely to cruise down the chimney in a dinghy than arrive on a sleigh. The region definitely doesn’t lack for festivities and a true seasonal spirit during the December holidays. Here’s a sampling of nautical celebrations throughout the islands.

LIGHTED BOAT PARADES
Deck your bows and enter your vessel in the St. Thomas Lighted Boat Parade on December 13. The procession starts at 6:00pm in Charlotte Amalie Harbor. First prize for best use of lights, holiday theme and originality is $500 cash. Entrants get a free slip the day and night of the event at Crown Bay Marina in order to better decorate. There’s an after party with live band hosted by Tickles Dockside Pub.

The next day, December 14, cruise over to the Christmas Boat Parade in Christiansted Harbor, St. Croix. The 6:00pm launch is preceded during the day by Christmas Carols, skits and sketches and dance routines from several church youth groups around the island.

On this same date, the San Juan Christmas Boat Parade will take place out of Puerto Rico’s Club Nautico de San Juan. Over 30 festively bedecked boats are expected to line up in San Juan Bay at 5:30pm for the magically illuminated procession. Visiting yachts are welcome to join!

There’s a one-man parade featuring Santa himself sailing into the Marina at Casa de Campo in the Dominican Republic on December 22. From 6:00pm to 8:30pm, the red-suited jolly fellow will spread cheer from Barlovento Street ending with a holiday show in Plaza Portofino.

On December 23, starting at 4:30pm, the Christmas Flotilla/Carols Afloat event casts off from IGY’s Rodney Bay Marina in St. Lucia with Santa in the lead boat for a cruise out past Pigeon Island and back. All classes including visiting and local sailing and motor yachts, Hobie cats, fishing boats, and more are welcome to participate.

The next day, Christmas Eve, the BVI’s Bitter End Yacht Club in Virgin Gorda hosts its Holiday Lighted Boat Parade, which begins at 5:00pm. Santa leads the parade around the North Sound while later, back on shore, all are invited to tropical caroling poolside.

HOLIDAY BAZAARS, FESTIVITIES & PARTIES
Shop for presents and support over 50 local artisans at the Christmas Bazaar, which will be held at Grenada’s True Blue Bay Resort and Marina’s Dodgy Dock Restaurant from 10:00am to 5:00pm on December 15.

Over in northernmost Belize, a group of U.S. and European expat live-aboards in Consejo (pronounced Con-say-ho or Con-say-ho-ho-ho during the holidays), host a Christmas party in mid-December for the village’s children. Visiting cruisers are welcome to participate and donate items like crayons, coloring books or toys to stuff the Christmas stockings sewn up by the expats.

Visiting yachtsmen are welcome to purchase a temporary membership and tickets to attend the Christmas Party at the St. Maarten Yacht Club, set for December 15. The membership allows participation in the Club’s events and regattas, while the party ticket entitles cruisers to food and a present. [highlight]Go along and meet the editor of All At Sea, the MC for the night[/highlight].

There are several traditional island festivals that coincide with the Christmas holidays. For example, Montserrat Festival takes place from December 14 to January 1, while the St. Kitts & Nevis National Carnival runs from December 15 through January 2.

One of the biggest this year will be St. Vincent’s Nine Mornings festivities or countdown to Christmas which celebrates its 100th year. From December 16 to 24 starting at 4:00am daily there will be a culmination of caroling contests, community tree lightings and special shows and concerts.

On Bequia, lighting up under the ‘Almond Tree’ (actually more than one tree!) on the waterfront in Port Elizabeth is a community-organized event that kicks off December 15 to mark the start of Nine Mornings.

It’s a real focal point for get-togethers, parties and fetes and features caroling, musical events and stalls of food and drink.

Cruisers docked in one of the 20 transient slips at Puerto Rico’s Ponce Yacht & Fishing Club are invited to White Christmas on December 21. This is the Club’s biggest party of the year, and even more so since this is the 75th annual, and features food, live bands and dancing.

Antigua’s Nelson’s Dockyard Christmas Party starts at noon on December 25. Everyone dresses up in red and white. Some don Santa hats, others antlers or ties that play Jingle Bells. The big attraction is a dinghy full of ice cold champagne. Party proceeds benefit local charities.

OLD YEAR’S EVE
Ring in the New Year on December 31 by watching fire dancers, fire balls and fireworks. At Foxy’s Tamarind Bar on the BVI of Jost Van Dyke, fire dancer Silver Raven will perform in the run up to midnight. Even more spectacular, Bunny Wailer, singer songwriter and original member of reggae group The Wailers along with Bob Marley and Peter Tosh, will headline the celebrations. Tickets are $45 when purchased prior to the event. Or for $400, enjoy a six-course seafood meal, open bar including champagne and noisemakers in the Upper Crust plus Bunny Wailer Concert in the Outback.

Across the water in Beef Island’s Trellis Bay, where there is a large anchorage, an afternoon of arts and crafts demos, aerial acrobatic and juggling shows, and live music and food, builds up to a midnight spectacular where Fire Ball Sculptures are set aflame out in the water. South in Bequia, the harbor fills with visiting yachts to watch the amazing fireworks display at midnight. Some watch from their yachts while others from one of the many bars and restaurants located around Admiralty Bay. After the fireworks, the New Year’s partying really starts!