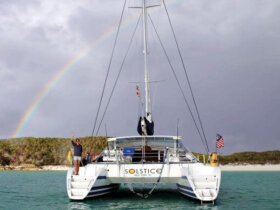 Charter in the Bahamas

A Charleston man’s dream of running a 53-year-old wooden fishing vessel he bought on ebay as a charter boat is once again being realized.

The 61-foot wooden Blue Heron II was launched in from the renowned Gilliken yard on Harker’s Island, N.C., in 1960 and fished commercially from the Carolinas to Florida until 1996 when new Coast Guard regulations made it obsolete. It was sold for use as a shrimp boat, but when the nets were deployed the rudder was found to be lacking in size and reliability. Semi-retired, the boat eventually was moored and used as a floating bar at a waterfront restaurant. The culinary businessman was not a boater, and the vessel fell into disrepair from lack of maintenance.

After an ebay auction in 2007, Capt. Lucas Glover took ownership and re-christened her The Osprey. He spent two years refurbishing the boat while continuing to run a dry-cleaning business. A couple of years after realizing his vision of chartering the boat, however, Capt. Glover and his employee Carly Donohue were killed in a tragic but unrelated accident on the water in 2011. The Osprey was again rudderless in the ebb of time.

The first charters for this quartet of multi-tasking owners came during December 2012, with the Christmas Parade of Boats and a New Year’s Eve cruise. So far in 2013 bookings are better than expected for The Osprey with indications of a profitable summer ahead.

“This is a unique boat, and we can provide a USCG-approved platform for 48 folks,” said Buhrmaster. “If you can dream it up, we will do it on The Osprey.”

How about an oyster roast and skeet shoot while out cruising? No problem. Food and beverages can be provided to fit the needs of each group.

“Our main offering is a three-hour cruise of historic Charleston,” said Buhrmaster. “We are based out of Shem Creek in Mount Pleasant and we will cruise past the aircraft carrier Yorktown in the harbor before crossing under the Ravenel Bridge, which is now the largest cable-stayed bridge on the East Coast. Other vistas include Drum Island, the Charleston Battery, James Island, Castle Pinckney and of course Fort Sumter.”

Buhrmaster placed his career as a contractor associate on hold and is now practicing a labor of love running The Osprey. “When the four of us purchased the boat, we set up a business plan regarding the number of charters we thought would be realistic in 2013,” said Buhrmaster. “We also addressed some maintenance issues with the boat during the summer of 2012.”

How about an oyster roast and skeet shoot while out cruising?

The team replaced 22 mahogany planks – just over one-fourth of the hull. The owners were advised that, if they replaced planks as needed, there is no reason that The Osprey could not operate indefinitely. She also sports a juniper deck and white oak ribbing.

The two-story wheelhouse was moved aft prior to coming to Charleston, but that change creates the open deck space customers prefer when spending time on the water. Distinctive dual dry stack exhausts were added when the wheelhouse renovations were completed. The economic Cummins turbo diesel motors purr when The Osprey is cruising.

“My friend Lucas lived a lot of his life on the water, but running The Osprey every day is a lifestyle change for me,” Buhrmaster said. “I like to think that now my life is influenced a little less by Warren Buffet and a bit more by Jimmy Buffett. Being a Charlestonian, I can make this cruise offer a blend between one part nature tour, one part historical tour and one part pleasure cruise. Each trip is different and everyone going aboard is creating memories from being on the water and underway in a great boat like The Osprey.”

The groups that routinely charter The Osprey tend to stick to specific events. For instance the group that wants to ride along in the annual Christmas Parade of Boats has dibs on that date, and sailing enthusiasts who wish to charter the vessel for the annual Rockville Regatta will retain that date. Other groups will want to travel to nearby Morris Island during a holiday weekend, and so on.

An awning for the foredeck provides shade during Charleston’s long summer season, and the railing offers panoramic views of the Lowcountry for all, just as the Blue Heron II provided ample space for bottom fishing anglers during its head boat days.

The living history that The Osprey represents is a salute to wooden boats and the men who built them, and all those who have stood on her deck. With each voyage, The Osprey adds a thread to the maritime fabric of the Lowcountry lifestyle.

Jeff Dennis is an outdoor writer and photographer who grew up on a creek in Charleston loving the saltwater, and he contributes regularly to All At Sea Southeast. Read his blog at www.LowcountryOutdoors.com. 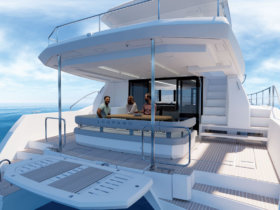