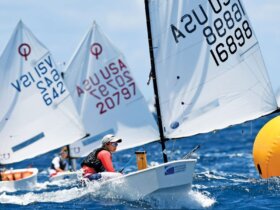 In recent years many new sailing regattas have been held in the Caribbean but the yardstick to which they are all compared is still Antigua Sailing Week, the longest running regatta in the region. Three years ago, a regatta organising committee was set up to manage the event and if the number of smiling competitors measured the achievement of that, it has been a roaring success.

With ten yachts 60ft or over, the 46th edition of Antigua Sailing Week had one of the largest big boat attendances for many years. Scratch boat was the RP78, Whisper, skippered by His Majesty, King Harald V of Norway, who was very complimentary about the experience. “I have not been to Antigua Sailing Week for a few years but I am very pleased with the race management and the conditions have been wonderful, especially as it is very cold in Norway at this time of the year.”

The two largest yachts had a titanic battle in CSA 2, British Frers 94, Bristolian, skippered by Patrick Wynn, had a great tussle with Hector Velardes Peruvian Nelson Marek 92, Locura. The two yachts had a gentlemen’s bet of a case of champagne for Line Honours, which Bristolian won, however, on time correction Locura beat Bristolian in the regatta, so both crews could celebrate.

CSA 3 produced the performance of the regatta, the long-awaited battle between last year’s overall winner El Ocaso and the much in form Arethusa. Richard Wesslund’s El Ocaso was defending the Lord Nelson Trophy but Phil Lotz’ Arethusa was too strong, the Swan 42 from Rhode Island won all bar two races to win the class with a day to spare, and were rightly awarded the Lord Nelson Trophy for the best performing yacht at the regatta.

“This just caps off a great season,” exclaimed Lotz as the crew sprayed the skipper with champagne on the awards stage. “The crew has been just magnificent in their time and effort preparing the boat and on the racecourse, also a big thank you to the organizers of the regatta; they have done a great job.”

CSA 4 produced one of the most competitive classes with four British yachts winning races. On the final day it went to the wire, Philippe Falle’s Grand Soleil 43, Quokka, got the better of Lucy Reynolds’ First 40, Southern Child, to win the class. However, during the week, Jeremy Thorp’s Lancelot II and Jonty Layfield’s Sleeper had both won races. It was also interesting to see that the top three boats were all chartered; the raceboat charter market is now a big part of the entry list for Antigua Sailing Week.

In CSA 5, two yachts had an epic duel, skippered by two very determined characters. Ross Applebey’s Scarlet Oyster and Carlo Falcone’s Caccia alla Volpe were virtually inseparable on the water all week. With both teams doing anything within the rules of sailing to gain victory, the class lead changed four times in just eight races. In the end, Caccia alla Volpe won the last race to win by a single point.

Two veterans of Antigua Sailing Week scored a perfect seven wins in their respective classes. Sir Hugh Bailey’s CS40, U-Go, was unbeatable and a lot of that was down to a regular crew that spent many hours preparing the boat just for this regatta. Geoffrey Pidduck maybe 75-years-old, 60 years older than the bowman on the Six Meter, Biwi Magic, but there is life in the ‘old dog’ yet. Pidduck won all seven races in CSA 6. When asked the secret of his success, he replied, “Antigua starts with the beach.” Referring to his starting tactics of being first to the shoreline at the starts to gain a favorable shift in the wind and get out of foul current.

The Overall Bareboat title went to Alfred Geisser’s Swiss KH+P Sea You Later. Alfred’s team celebrated by throwing him in the drink at Nelson’s Dockyard! Bareboat 2 featured an epic battle between the German team on Christoph Nielsen’s KH+P Bageal and the Irish team on Coleman Garvey’s Warvor. After seven closely fought races, both teams were tied but KH+P Bageal won the class by virtue of more race wins.

A final word of congratulation should go to the race management team, led by Racing Chairman Kathy Lammers. Unusual for Antigua Sailing Week, the regatta was sailed in predominantly light and often oscillating breeze, especially the last two days. However, the racing programme was completed and much of that was down to smart race management. Sailors come to Antigua Sailing Week to race and Sailing Week’s tag line; ‘Where sailing comes first’ is very appropriate and the reason that the regatta is such a success.

Louay Habib is a freelance yachting journalist who has competed at yachting regattas and offshore events all over the world. He writes for a variety of clients that include the Volvo Ocean Race and the Royal Ocean Racing Club.