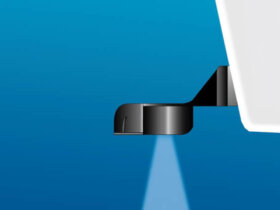 A RACON (Radar Beacon) is a well-known aid to navigation for mariners to identify an approaching safe water buoy at the entrance of a marked channel from sea. The vessel’s radar sweeps the RACON which activates a radar beacon on the buoy. The radar beacon then transmits a series of Morse Code dots and dashes visible on the boat’s radar display that corresponds to the dots and dashes displayed on the chart. For example, the sea buoy at Port Everglades, the entrance to Fort Lauderdale, has a RACON that transmits a “dash”. The SART (Search And Rescue Transponder), as originally developed in the 1990’s, is also radar-based and operates in a similar fashion as a RACON.

A Search and Rescue Transponders is a self-contained, waterproof transponder that is designed for use during emergencies at sea.

The transponder allows the SART to act as a homing device. The receiver in the SART is activated by X-band radar. This type of radar is found aboard all search and rescue vessels and aircraft (X-band radar is also the most common type of radar used aboard yachts and small vessels). Once the search and rescue craft’s radar interrogates a SART, that is turned “on” aboard a life raft or a vessel in distress, it triggers the SART’s transponder into the transmit mode.

The Radar-SART then transmits a series of 12 short bursts which is displayed on the search and rescue vessel’s radar screen as a line of 12 equally spaced dots, each .6 nautical miles apart.

The first dot is the position of the SART, and the other dots line up along a bearing that stretches to the edge of the radar screen. This bearing line provides a simple method to steer to the SART and rescue the mariners in distress.

As search and rescue follows the radar displayed bearing toward the Search and Rescue Transponders, the dots become concentric arcs centered around the SART.

Once within a nautical mile of the SART, these arcs turn into concentric circles, alerting the search and rescue team that they have essentially arrived at the location of the stricken mariners.

Due to the “more or less” nature of the arrival location using a Radar-SART, a more accurate method of homing in with a SART was proposed in 2007 by the International Maritime Organization (IMO). This device was dubbed the AIS-SART. Using AIS (Automatic Identification System) technology, which is a GPS receiver that converts the SART’s location and current time into a standard AIS position, the AIS-SART transmits its location via two VHF frequencies to nearby search and rescue vessels.

The AIS-SART transmits a series of eight identical position report messages once a minute. Four of these position reports are sent on VHF channel AIS1 (161.975 MHz) and the other four reports are transmitted on VHF channel AIS2 (162.025 MHz). Since VHF transmission is “line of sight”, this method allows a high probability that some position reports will be sent at a time when the Search and Rescue Transponders is at the crest of an ocean wave giving better signal reception to the search and rescue craft. Each AIS-SART has its own unique nine-digit identification code which cannot be changed, it always consists of the number 970 followed by six other digits.

Although the AIS-SART is more accurate than a Radar-SART (since the AIS version generates its own position, whereas the radar version uses a radar reflected position), as yet there is no directive from the IMO regarding a phase out date for using a Radar-SART.

Since small recreational vessels are not required to carry a SART, what is the justification of having one onboard?

Consider this scenario for boats embarking on transoceanic passages that are facing a life-threatening emergency mid-ocean and have activated an EPIRB. If the Rescue Coordination Center diverts a container ship to assist in the search and rescue of the vessel with the transmitting EPIRB, the last five miles of searching for that EPIRB is done by using the 121.5 MHz homing signal from the EPIRB. However, fewer and fewer ships now carry the RDF (Radio Direction Finder) necessary to follow the homing signal to its source. On the other hand, all container ships have radar and AIS receivers that will detect the position of a Radar-SART or AIS-SART. Case closed.