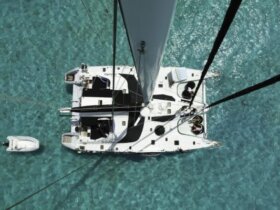 Just The Way You Are

With all eight entries now confirmed, this year's Budget Marine Match Racing Cup at the St. Maarten Heineken Regatta is set to establish itself firmly on the ladder as one of key match racing events in the Caribbean. Besides Peter Isler, Gavin Brady, and Peter Holmberg – three of the world's most respected match racing skippers – there are other interesting names who'll be racing for cash prizes totalling $10,000 at this ISAF – sanctioned Grade 5 event, including Colin Rathbun, Eugeniy Nikiforov, Jakub Pawluk, Chris Nesbitt and Marc Fitzgerald.

Racing, on Tuesday, March 2 during the run-up to St. Maarten Heineken Regatta, will be based on a round-robin format and sailed in Lagoon Sailboat Rental's fleet of six Jeanneau SunFast 20s without spinnakers. The one-day format and just six boats for eight teams means racing will be action-packed with crews swapping boats after every flight to ensure racing is kept as fair as possible.

With a silver medal from the 1988 Olympic Games, and a win for Alinghi at the 32nd America's Cup in 2007, listed among his exceptional sailing achievements, it wasn't particularly surprising to see Peter Holmberg clean up at last year's inaugural Budget Marine Match Racing Cup. The good news is: he enjoyed it so much, he'll be back to defend his title this year.

Holmberg, no stranger to island life, having been brought up in the US Virgin Islands, is always an avid supporter of Caribbean regattas and says he made sure he did most of the big events in the Caribbean last year as well as competing in the Louis Vuitton Pacific Series in New Zealand. "The Heineken is the big opener to the Caribbean season so I'm looking forward to racing against all the hot boats coming this year."

Sailing with team mates Ben Beer on jib and Maurice Kurg on mainsheet, Holmberg says the match racing is a great lead-in to the Heineken Regatta. "Match racing puts a premium on all aspects of racing, from crew work, to speed, to rules, so it's a great way to get me and my team in racing shape just before the big regatta."

Joining Holmberg at the event this year is the equally talented match racing pro Peter Isler. Isler is two-time winner of the America's Cup and has a total of five America's Cup campaigns under his belt, including the position of Oracle's navigator in 2007 at the 32nd edition. Isler also was an active and successful skipper on the pro match racing tour in the late 80s and early 90s and sees the Budget Marine match racing event as a chance to get back on the helm and have some fun. "It's been so long since I steered any sort of regatta, my expectations are certainly tempered … but it will be a lot of fun … and that's why we are coming!"

Isler will be racing with a couple of his teammates from Titan 15, Artie Means from San Diego and C.T. Olander from Newport, Rhode Island. He says when he saw publicity about the match race, he thought it would be a fun start to Heineken Regatta. "Because it's only one day, I can afford the time – we start practice on Titan the day after the match race."

With Gavin Brady, another highly talented match racing helmsman and multiple America's Cup campaigner, joining the line up at the event, there'll be no shortage of top ranked competition on Simpson Bay Lagoon this month. "This will be the first match race event I will sail in 2010, and with good teams and great winds I am really looking forward to the racing," Brady said.

Colin Rathbun from the BVIs is another Caribbean race week regular and although he is known more on the fleet racing circuit sailing his IC24, he won the 2009 Pete Shiels Match Race, and notched up a creditable fourth place overall at the 2009 Carlos Aguilar Match Racing Regatta in St. Thomas. "Our claim to fame at that event," said Rathbun, "is to have beaten U.S. match racing pro Dave Perry. We barely slid through in front of him, but it's not every day an amateur sailor can say that."

Russian sailor Eugeniy Nikiforov, who's currently ranked 45th the ISAF Match Racing placings, will be back and hoping to improve on last year's third overall, while Marc Fitzgerald from the British yacht Sojana hopes to at least match the second place he achieved last year. Jakub Pawluk from Poland will make his debut at this event, while Chris Nesbitt and his team of Brian Janney and Isao Toyama, who've been match racing together for a year, hope to turn a few heads as they pit themselves against the professionals. "It's not often that we get to sail against America's Cup veterans and it should be a great learning experience for a new team like ours," Nesbitt said.