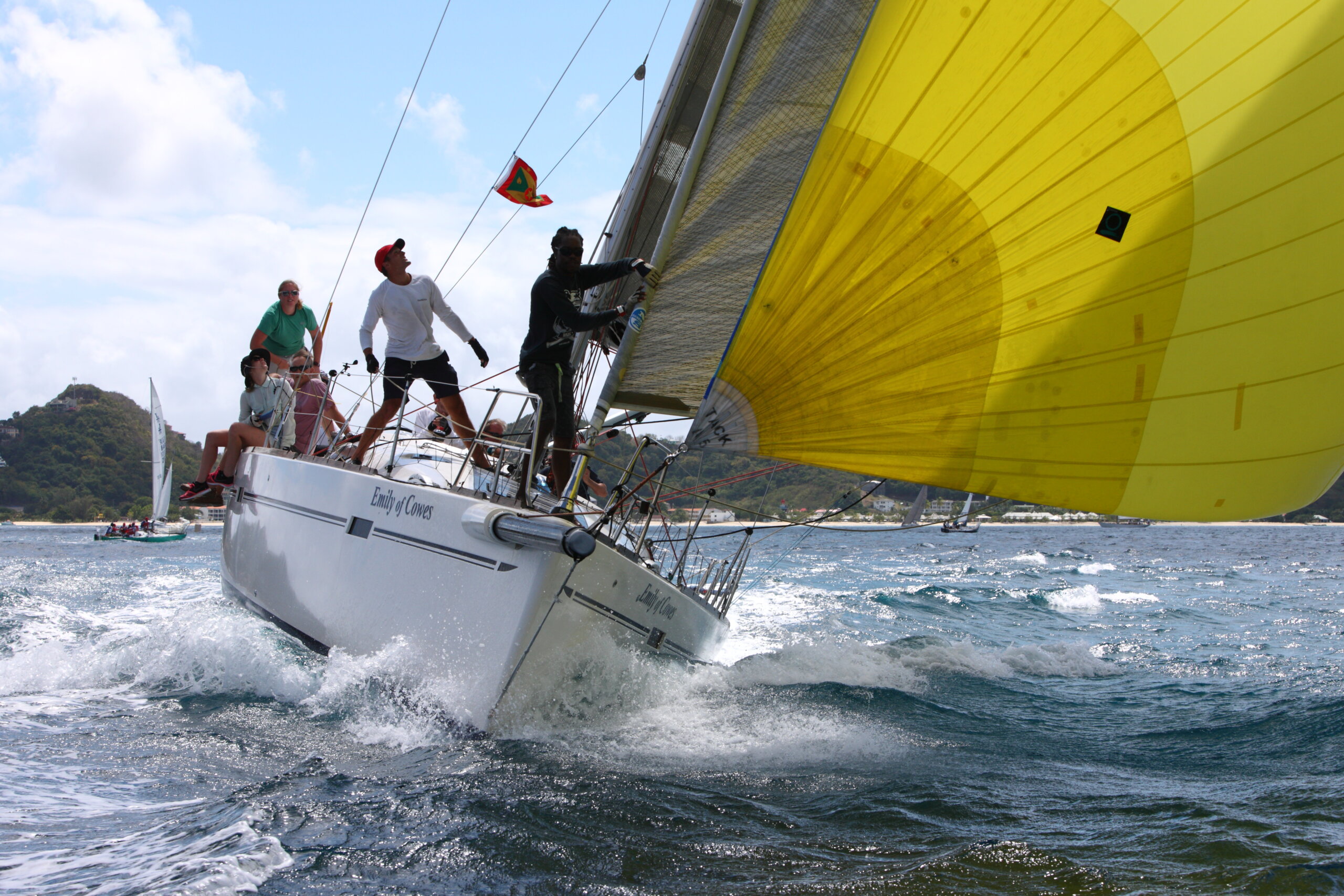 Marc Glimcher’s J 122, Catapult and his crew are all from East Coast of the United States and compete in many regattas; often in a fleet of J 122s. Marc and his crew are having a great race and currently lead the RORC Caribbean 600 overall on handicap. At 1300 local time they were rounding St.Maarten to head south on the long beat to Guadeloupe.

Catapult crewman, Brock Callen took a few minutes to talk about the ride.

“It’s freezing cold back home in Massachusetts right now and I am wondering why my sailing buddies at home aren’t doing this race? The sailing conditions are just gorgeous. Last night as we were on deck, just in t-shirts, a Humpback whale came right up to the boat. Watching the sun go down with the spinnaker up and surf under the hull is a great experience.

We have a good spirit on board and we all have specific jobs, especially on manoeuvres. At Barbuda we gybe peeled from the 3A to the 2A and it was a smooth operation. It paid off, as we passed several boats shortly after the rounding. Things have been going really well and the skipper and the crew are enjoying this race, so much.

The next leg looks like it will be a beat, possibly all the way to Guadeloupe and the wind may go lighter. We will be trying not to get too frustrated and concentrate on sailing the boat to the best of our ability.”

The majority of the fleet are entering another stage in this tactical race. At the moment light headwinds are forecast for the boats on the leg to Guadeloupe. After spending a long period with little rest, the sailors will begin to feel the effects. It is often easier to concentrate when the boat is flying along. In light airs, tiredness can become a big problem.

There is a great tussle in IRC SZCK developing between Lee Overlay Partners, the current holder of the RORC Caribbean 600 trophy, and Privateer. At 1500 today local time Privateer was nearly 8 miles ahead of Lee Overlay Partners. However, Privateer has a different keel and rig configuration therefore on handicap, the two boats are virtually neck and neck.

IRC Super Zero has a new leader, Vela Veloce are now ahead of Beau Geste on handicap with DSK Pioneer Investments in third.

Noonmark VI has led IRC Zero on handicap from the start and continue to do so, but Spirit of Minerva and Spirit of Isis are ahead on the water by just a few miles.

As previously mentioned Catapult are leading IRC One and the race overall but Caspian Services EH01 are not to far behind and nor is local Antiguan boat, Café Americano.

Dolfijn may be last on the water but are actually third overall on corrected time. The Swan 38 has Great Escape of Southampton and Overproof in sight which must be helping them to gauge their performance.

ORMA 60 Region Guadeloupe have made a bold move and are now 30 miles to the west of Montserrat, the move seems to be paying off. The rest of the fleet are experiencing falling breeze whilst the multihull is achieving 17 knots of boat speed.

You can track the yachts and read the messages that are coming in by accessing the Tracker Page or the Boat Blogs page on the official RORC Caribbean 600 web site.