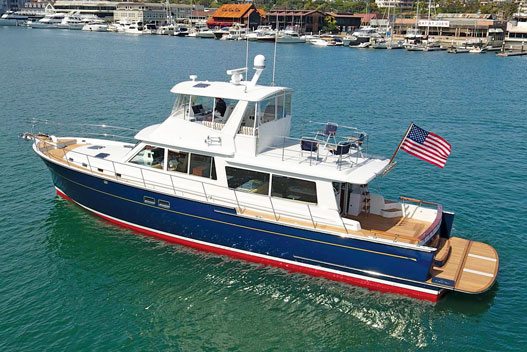 Oftentimes, it’s the last-minute changes in a boatbuilding project that make all the difference when the owner takes the helm for the first time. Such was the case with the new Duffield 58 from Duffield Yachts. Well into the build, Twin Disc and distributor Palmer Johnson Power Systems stepped in with a proposal to transform the vessel’s handling, including an MGX QuickShift® transmission, state-of-the-art EJS controls and hydraulic thrusters. Quick work and coordinated efforts resulted in a smooth-operating vessel with precise maneuverability that had its new owner ecstatic over the performance.

With a displacement of 53,000lb, the Duffield 58 isn’t a heavyweight. This is due, in part, to its single Cat C12.9 diesel engine. It’s also what made an advanced propulsion system a requirement. Unlike twin screw boats that can move sideways using only its throttles, a single propeller in a boat this size is ineffective. The Twin Disc configuration delivers exacting maneuverability by simultaneously actuating the throttle, transmission and thrusters. Using one of the three EJS joysticks—main helm, flybridge and tethered remote—the vessel will move in any direction proportionate to the force exerted. It’s so intuitive that docking and piloting around tight obstacles can be accomplished by even novice boaters.

“I can’t tell you how easy it is to operate this boat by myself,” said Travis Duffield. “The amount of confidence I have putting this boat anywhere is unparalleled. I don’t care if it’s windy, the tide’s rippin’ out or how tight the slip is, wherever I move that joystick, the boat’s going to go. I’ve run a lot of boats in my day and none are as easy as this boat—it’s kind of a game-changer for me.”

The striking Duffield 58 is a California take on the classic Down East-style cruiser. Single-level, open living in its expansive, well-appointed main salon and centerline helm provide panoramic views. The boat’s luxurious master and guest staterooms, crew quarters and two heads are forward. The slippery hull and power combination delivers a cruising speed of 17kts at a mere 25 gph. More information, visit: www.duffieldyachts.com & www.twindisc.com. A video of the boat’s maneuverability is at: youtu.be/8Aepyyw_0Ms