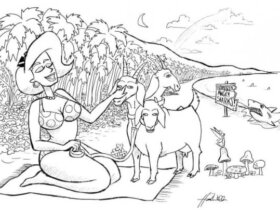 Some sailors dream of sailing around the world, with or without charterers. But soon we could be sailing over the world unless you’re afraid of heights! That dream could come true this year although it is not without some unique challenges and adjustments.

Space chartering will revolutionize the present charter industry with its unique rules such as: 1) There would be no late arrivals holding up the charter; 2) no special requirements provided for charterers such as a) violet-scented toilet paper, b) a personal vehicle (space dinghy) to run them around and c) different meals or drinks for each person; and 3) no customs or immigration requirements.

Passengers would be strapped tightly down in their seats and not allowed to get out of them until zero gravity time. Woo boy!  All of us have undoubtedly wanted to strap down our passengers for one reason or another!

There would be standard flight rules for charterers such as: 1) no whining, smoking or throwing up; 2) no comments such as “When do we get there?” or changing their minds as to where they want to go; 3) No clogging the head or bringing aboard unwanted items such as sandy driftwood, stinking shells or short-term guests (girls); and 4) inappropriate behavior like excessive loud burping, farting or singing off key.

Furthermore,  it would be strongly emphasized that the captain’s word is law and that charterers must obey all the rules, such as to how long they may “fly” at zero g and that they will return to their seats promptly and without grumbling when the captain tells them to.

Alas, at the present time, space flight is available only for charterers who must 1) be wealthy enough to pay $200,000 a person, 2) have medical checks and 3) undergo preparation, team bonding and g force acclimatization for two to three days before the flight.

Presently, Virgin Galactic, funded by British billionaire Sir Richard Branson, is offering in 2010 or so, flights on its SpaceShip Two for around two hours, which includes floating in zero g should one wish to. Approximately 300 reservations with deposits have already been received. For more information, go to www.virgingalactic.com.

Flights will originate in New Mexico, which is rather appropriate since that state has a history of UFOs supposedly spotted near Roswell.

You’ll be buying your ticket soon, won’t you?

Jeannie Kuich, once a long-time charter chef in the Virgin Islands, has been writing monthly columns for the Daily News since 1985 and periodic columns for Caribbean Boating, Nautical Scene, St. Thomas This Week and Cruising World magazines. Jeannie is the author of “Soap Operas of the Sky”, the only stargazing sky guide for the Caribbean.

One of the best places to charter, especially because it’s a bit off the beaten track, is St. Vincent and the Grenadines.

MarineMax Vacations Expands to the Bahamas, Partners with Navigare Yachting

Cruise the Abacos with MarineMax Vacations. as it re-opens its base at the Conch Inn Marina at Marsh Harbour.