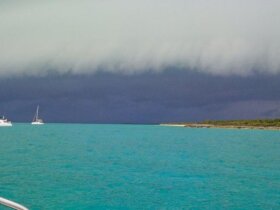 It’s Summertime in the Bahamas

Once upon a time when a sailor wanted to cross an ocean, he’d bring some water with him and drink it when thirsty. This worked well but, ultimately, was deemed too simple. It was decided by SALT (Senior Advisers to Landlubbing Technicians) that an expensive watermaker should be installed aboard every ‘serious’ cruising sailboat.

How do watermakers work? Well, they don’t make water! Instead, they subtract salt. How? By tremendous pressure—often over 800 pounds per square inch. Want more technical details? Okay! The watermaker manufacturers are greedy, and they want to squeeze every penny of profit out of their customers as possible. This ultra hard ‘squeeze’ is also used to force the seawater through a very, very fine filter, which strips off the salt molecules.

The beauty of the watermaker is—on a retail level—that it doesn’t work very well. It requires high pressure, which is very energy-demanding. Plus, there are often sophisticated internal electronics, and we all know how nicely they hold up in a salt water environment.

One more note: some manufacturers like Trifecta attempt to make their units so automatic, that they are almost idiot-proof. This results in a very expensive unit, which is … well, impossible to even understand if it is working correctly or not.

And that’s just the beginning of Our Tale of Watery Woe.

Nonetheless, the idea (and marketing slant) is that—once you purchase a watermaker, your drinking water problems evaporate forever.

My friend Wally D. Gulper recently purchased a brand new unit. He just walked into a chandlery with a sailbag full of cash, and said, “I want to buy a watermaker.”

“No problem,” said the grinning guy behind the counter. “We recommend the Infinite Model. It is just $7,000 US, no credit cards, and no receipts.”

That sounded pretty good to Wally.

“Okay,” said Wally D. Gulper and counted out the cash in used $20 bills.

The salesman then placed a huge, shiny box on the counter, and Wally picked it up and started to walk out.

“Where are you going?” asked the sales guy behind the counter.

“Er …” said Wally, “I am taking my new watermaker back to the boat to install it?”

“What about the filters?”

“I thought it was complete,” said Wally.

“Well, it is complete,” said the sales dude, “but you can’t just use it that way!”

Wally sat the package back down dejectedly, and asked, “How much are the filters?”

“… it’s a unit of measurement which costs a lot more than medium, fine, or very fine,” replied the salesman.

“Two hundred bucks, plus the plumbing nipples and belly button …”

“Sorry,” smiled the salesmen, “I meant to say starter button! Thanks for catching my error.”

“You’re welcome,” said Wally, and once again attempted to leave.

“Whoa,” said the salesmen. “What about a pump?”

“Sure it is,” agreed the salesmen, “but you need a pump to PUMP water to that pump … through those fine, fine filters I just sold you.”

This time, when the salesman looked up the price, he just whistled and flung the catalogue around for Wally to see.

The color drained from Wally’s face. He didn’t know what to do—but, in for a dime, in for a dollar. “I’ll take it.”

Before Wally could attempt to leave again, the sales clerk blurted, “You’ll need a pre-filter … to filter the water before the pump … which pushes it through the filters … which gets it to the main pump … which pumps it into the real, actual, final filter!”

“Is this, like, a Candid Camera thingy?” asked Wally, looking around the room hopefully. “Am I, like, on television?”

“No,” said the saleman, “and you should consider a monitoring device, too. Otherwise, you won’t know if you are drinking poison or pure freshwater.”

“Excellent,” cried the salesmen, “and, of course, you’ll want to buy a tiny ‘bad water’ sample as well.”

“Well, you see the monitor needs a base-line. Thus, you put it in some bad water with just the right amount of salt to calibrate and adjust it … and you’re all set!”

“Far, far less than the main unit,” assured the salesman, “and if you have an up-to-date yacht club card, are willing to give us an on-site blood sample, and have a valid HIV-free certificate … we can offer 3% off the water sample drop.”

“… it’s nothing,” said the salesman bashfully. “And now that you’ve got the water quality monitor, you’ll know when to routinely clean it.”

“Well, if you go to the South Pole, drill down a few thousand feet, retrieve an ice cube of sea water from earth’s childhood … and defrost it … well, you can go a long, long time without cleaning your unit. Alas, if you use the polluted ocean water from our currently deteriorating planet … well, you have to clean more often.”

“Yes, ‘exactness’ is a good idea,” said the salesman, practically glowing now. “There can be problems with unwanted alkaline build up—which we have a kit for.”

“No,” admitted the salesman, “all the parts you don’t need. Market research has clearly shown us that people don’t mind paying more for a ‘kit’ versus a solitary part … but, of course, we don’t want to infringe on future profits by supplying you with something you might actually need or use. So, instead, we fill the ‘kit box’ with left over parts from other discontinued products and print numerous made-up part numbers on the outside of the package! See how logical and retail-rational all this is?”

“Well, no,” said the salesman, and stopped in mid sentence.

Wally had started to shake, rattle, and roll. Smoke was beginning to leak out his ears. He pulled back his thin, grimacing lips, revealing yellowed teeth—which he began gnashing at a furious, frustrated rate.

“… now, don’t get angry,” said the salesman. “This is for your own protection. Some napkin manufacturers use perfumes that cloud the company’s logo sticker. Thus, the Infinity Watermaker Company went to Clean-EX for a specially formulated wiping-device which is harmless to your unit. Using just anyone else’s paper towel or a discarded rag may … and I repeat the word MAY … cause your unit to explode … with loss of hands and eyes a possible result.”

Wally D. Gulper couldn’t take it anymore. He burst into tears … which leaked onto the packages on the counter and, because of the high salt content of his strongly flowing human drops … started corroding the new watermaking unit … even before he’d gotten it out of the store.

“I will gladly sell you a single Infinity Wipe by Clean-EX—or a five pack—for under a hundred dollars,” offered the ever hopeful, ever helpful salesman.

“… does this ever stop?” sobbed Wally.

“… with the Infinity product line,” mused the salesman gently, “I’m afraid not.”

“…is there an upside?” gasped Wally.

“Certainly!” replied the salesman. “You’ll spend so much time and money messing with your watermaker—that, chances are, you’ll never go offshore anyway. You won’t have the time, and you won’t have the money. Thus, your overall goal of not dying of thirst is assured in a strange, yet highly reassuring way.”

Editor’s note: The Goodlanders are in the Pacific and bound west on their third circumnavigation.