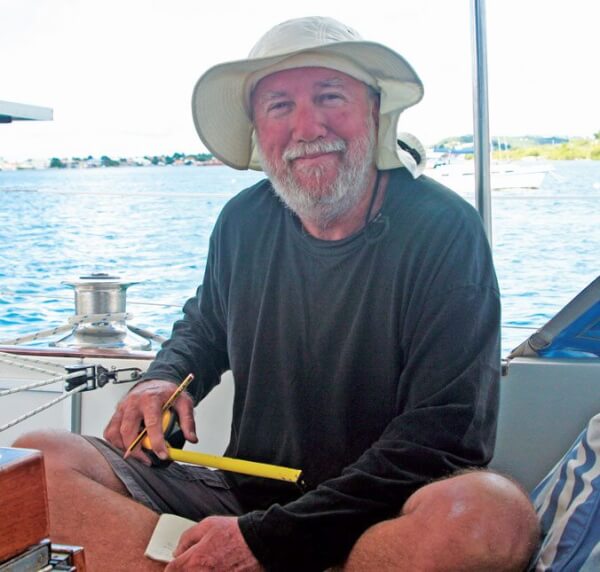 I love traditional boat shows. Where else can you see one hundred different ‘new, improved’ anchors, which don’t work? I always watch the anchoring videos. Why is it Bikini-clad women with large top-hampers love to prance around and wiggle their cute little butts with cute little anchors draped about?

And ain’t it marvelous that these new anchors need little scope, weigh less, and are super-easy to break out?

“This anchor is far and away the easiest to break out in its class,” one anchor salesmen told me.

I purchased it, brought it home, tested it and he was telling the truth. That sucker ‘broke out’ of the bottom at the faintest hint of a thought! All you had to do was wish! No matter where you tossed, it was a Teflon-coated bottom! Fish hooks held better. Paper plates! This anchor had less drag than a Penn reel with stripped gears. Nada! Zilch!

I love the large, plush cruising boats high and dry inside the building, too. I mean, a truly knowledgeable builder isn’t going to take any chances by launching his vessel where it is subject to the vulgarities of a marina. No siree! Plus, why risk a buyer getting seasick before he can sign the deposit check? Or having a floating styrofoam cup hit the hull and crack it? No, too risky!

On-the-hard is the best place to show a boat. The rigs are seldom lost unless the sails are mis-trimmed to a nearby air conditioning duct.

Of course, the brokers keep a booze bottle or two tucked out of sight. They know that a modern boat buyer usually needs his checkbook hinges lubed with alcohol, more alcohol, and lots more alcohol!

I  love the boat shoe manufacturers as well, and how they thoughtfully price their shoes less than the average vessel – just barely.

Sailmakers are always out in force. Each claims that they can sew up hundred dollar bills into a faster shape than their rivals. Each has some new DYNA-FASTIC fabric which they say will revolutionize sailmaking and you’ll never hear of them again.

Yes, there are always lots of bored sailmakers lounging about. If you are a racing sailor, lose on the race course, and can’t get a job anywhere else; you end up selling sails on a per-stitch basis at boat shows. The truth is as slippery as the fabrics. For years, sailmakers tried to get both sides of the spinnakers the same length. Finally, they gave up and conceded defeat with the word ‘asymmetrical.’  Why not turn failure into victory?

The engine manufacturers always show up. There’s that Japanese company that offers a line of 8 to 208 horsepower diesels ‘conveniently based on the same block.’

Of course, they deny they’re playing a numbers game. “No, really,” said one gear-head salesman, “by adding a turbocharger, racing-flame decals, and rounding out the pistons we really do get an extra 200 horsepower.”

You ever hear one of those suckers spinning at full RPM?  Not for long, you haven’t.

“Any disadvantages?” I asked the salesman.

“None!” he said happily. “Nobody thought of it before!”

“Lucky you,” I said, and couldn’t help but high-five him.

Even the marine sanitation people are cashing in. The composting toilet folks all seem a tad, well, loony. Suggesting you eat peat moss hardly seems like the best way to market a ‘labor saving’ device. Plus, after they’ve ‘re-educated’ you on pooping and peeing (yes, a vastly different procedure in their highly stratified liquid/solid world); they never mention what happens next with your belly full of peat moss, your pan full of you-know-what, and your bucket full of sloshing mellow-yellow.

This is progress?  Just listening to the sales pitch constipated me for almost a month.

“Oh, I can barely wait,” said my wife, “to invite guests over to our yacht to watch our bacteria feast!”

I’m usually giving seminars at boat shows. Thousands of male sailors approach me with the same two questions – how to find a good boat and woman.

“Forty-five and forty-five,” I always say, and if they look puzzled, add, “LOA (length overall) and IQ!”

The reason that boats are primarily sold to men is because women are smarter. You can tell a man that the 22-footer he’s considering sleeps eight, and he’ll think, “Great! I can invite seven of my drinking buddies along!”

But the wife will know that number is just a fantasy because, “The boat is designed and built by men and for men, all of whom think this is six inches,” she’ll say, holding her fingers two inches apart.

The ‘re-packaging’ folks are getting more imaginative, as well. For instance, what offshore sailor would go to sea without a waterproofed iPad pre-loaded with fishing, burial at sea, and cannibalism apps?

Oh, iPads have a sense of humor. I had no idea the MOB app on my charting program required an additional download and neither did my deceased crew member, I’ll bet.

I was shocked to see the MOB Safety Harness display. Who knew there was an expensive ‘trophy wife’ model which would disconnect the elderly rich husband at the merest push of a Blue-toothed, silicone-enhanced nipple.

Wind speed meters used to tell you the wind speed. Now they politely suggest you (in various regional accents) take in the Yacht Ensign, roller up the Code Zero, take a tuck in the mainsail right up to removing and burying the entire rig.

I’m not so sure I’m into these talking gizmos like SIRI either. I asked her if she loved me and she said she ‘respected’ me! I kid you not! Then I suggested a few specific physical things I’d like to try with her and, after a moment or two of shocked silence, she blurted out, “I’m telling Steve Jobs!”

Marine magazines often go to the boat shows and give away free copies to prove what their publication is worth. As a marine writer, I often refer to these publications as ‘fish wrappers’ but once, while on staff at Caribbean Boating in the early 80s, I was called by a volunteer at the local humane society and informed exactly how much the animals in their cages appreciated my writing.

At recent boat shows, LED lights are on display everywhere. Many of the lights are so dim you can’t tell if they are lit or not. They aren’t measured in lumens the same way incandescents are – not unless an LED candle is as bright as a prison yard searchlight. I love when the LED salesman breezily points to an expensive one-day-old unit with half its diodes out and says, “And they last for 50 million hours, on average!”

Who trains these people, Three Blind Mice Lighting and Pizzaria?

Most of all, I love the ‘in the pool’ demos of life rafts and inflatable PFDs. I watched the old lady with the ‘mother-in-law’ PFD unit drown many times before becoming bored.

Some manufacturers go too far – the ‘hookah style’ mainmast on the hippy sailboat seemed a tad over the top, as did the razor-blade-finned jet-ski named BEACH TERROR! Ditto, the ski boat named MANATEE KILLER.

In the end, I’m like any other blissed-out, product-drunk boat show attendee — with aching feet, a giant brochure bag, a bulging tummy, and drained bank account.

“What did you buy,” my wife will ask as I return home, and I’ll freak her out by grinning and shouting maniacally, “Everything! Everything!”

Bio Note: Fatty and Carolyn Goodlander are currently in Bali, teaching their too-cute three-year-old granddaughter how to panhandle on the dinghy dock of the local yacht club.