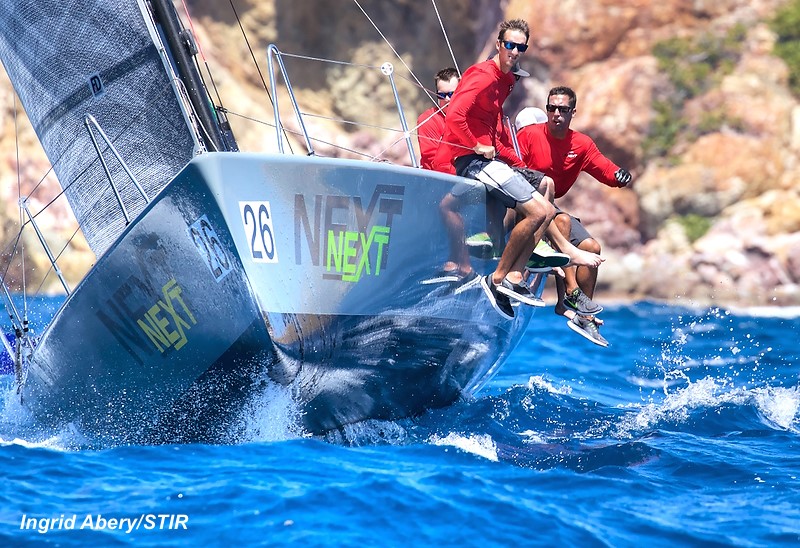 “I’ve got a great idea,” I said excitedly to my long-suffering wife, Carolyn, “I’m going to start a Fat Rally!”

“Don’t get personal, I said. “Remember what our marriage counselor said? And, besides, you know we can’t afford a divorce!”

“Anyway, I’m going to call it a Fat Rally because that is what it’s going to make my wallet,” I giggled greedily.

“Do you have a business plan?” Carolyn queried. “Have you identified your potential customers?”

“Absolutely!” I said. “I’m going to aim exclusively at cruisers who think they don’t know what they are doing or aren’t sure.”

“Are there a lot of those?”

“Evidently. The Rally Industry for Timid Greenhorns Desiring Handholding is experiencing rapid growth across the board. So, yeah, there must be oodles of ‘em!”

“How do you attract them?”

“Hype the fear! Tell ‘em that Paradise is filled with murderers, rapists, and other bad-tempered bureaucrats. If you don’t fly a FAT RALLY flag, the locals will kill and eat you with hot sauce and conch fritters!”

“How will you afford the start-up costs?” Carolyn asked. She was doing her toenails, an occupation she has, pretty much, devoted her life to.

“Sponsors,” I chortled. “They will see those very same flags and know they mean suckers! That’s why the marine industry price-standard for ARCH flag-fliers is list price times two, plus whatever, minus five percent!”

“Of course not,” I agreed. “You’ve got to sell it on a social and comfort level as well.”

“… which means,” she asked lazily while taking another sip of her nearly-eternal Pina Colada.

“These are socially inept people. They’re awkward. They fear rejection. Thus, they prefer to hang around with … similar folk. Thus, I’m going to advertise the wild parties … where everyone gets a complimentary marine lampshade to wear …”

“It’s like the modern boat builders do these days,” I lectured. “In yesteryear, if you wanted your boat to be known as a fast, strong racer, you built a fast strong racer. And, like Swan, you then had a certain international panache. Nowadays, it’s different. Take that British builder of over-priced half-tide rocks; damn, I’m having a Senior Moment – it’s named after a shellfish … oh, yeah! Scallop Yachts! Anyway, these water pigs are so slow you can’t even tell if they’re aground or have their anchors down because neither affects their boat speed to a noticeable degree. And, so, of course, they get lots of complaints from owners who are wondering why they have to factor in continental drift on passage …”

“Get to the point, Fatty,” Carolyn scolded.

“The point is, if your boat is embarrassingly slow, you go to Antigua Race Week and set up an ‘exclusive Scallop Cup’ class within the larger regatta to convince people your boats are super fast!”

“Exactly!” I clapped my hands with glee. “Ain’t corporate logic and the Big Lie a beautiful ting? There are no other boats to compare ‘em with! Only rocks and islands, which they are noticeably faster than! Plus, you can film ‘em at one speed, and play the TV footage back at another! Cool, eh?”

“What’s this got to do with Yacht Rallies?”

“Don’t you get it,” I asked. “It’s the same thing. The too wealthy folks who are buying a Scallop Yacht to race in Antigua don’t, of course, realize their ‘special’ course is half the distance and their ‘special’ race duration time twice as long, they think it’s like, sort-of, real yacht racing! Ditto, the rally goers. They fly the flag proudly.”

“Naw,” yawned Carolyn, “You’ll have to offer more than that.”

“Okay,” I said, “I’ll also include a KLACKER-WACKER device.”

“A button you push if you’re bored on passage and want to see in the inside of a real SAR ‘copter.”

“It doesn’t,” I scream, and laugh maniacally some more. “But the greenhorns won’t know that!  They have vague fears. Why not offer only vaguely plausible solutions? And, also, I’ll tell them we’ll have an SSB net. They won’t know that everyone has a net and you don’t have to pay $5,000 to tell everyone how scared you are on a daily basis!”

“Of course not,” I say. “You have to demonize the competition. For instance, I’ll label the other people using oceans at the same time (no matter how experienced) as ‘tag-alongs’ and ‘wanna-bees’ and ‘free-loaders’, etc.  It will slowly evolve in the media and the publics’ consciousness that there are two types of sailors in this world, safe sailors who give me money and ‘dare-devil, risk-taking’ sailors who don’t. PATI did this with sport diving, why shouldn’t I do this with offshore sailing? Why shouldn’t people have to buy a Fat License to sail offshore? A Fat Certification? Earn a Fat Diploma?”

“Yes,” I said happily, “it is. For instance, certain Gulf of Aden rally organizers don’t come right out and say the mighty U.S. Navy will escort their convoy through the Somali pirates. They just wink and infer that ‘the fix is in’. They hint that, because of their (nonexistent) contacts within the military and the fact that U.S. vessels are involved … that their ‘exclusive’ rally will be protected by the Western Powers lurking just over the horizon but that other, lesser (meaning free) convoys won’t. This is totally untrue and demonstrably false, but many scared cruisers want to believe it as they sign their large ‘convoy fee’ checks in Thailand.”

“You’re giving me a head-ache,” my wife complained.

“Fear is a funny thing,” I continued. “It’s a powerful motivator, a known leveler. There was one mega yacht on its way to the Red Sea that hired its own private Navy-type escort vessel, manned by ex-Green Beret types, to accompany it. To make sure the guys on the private vessel were truly motivated, the mega skipper agreed to a sizable ‘bonus’ if the mega yacht was attacked and successfully defended. Guess what? Yep! Off the coast of Yemen, they were approached! Even worse, the approaching vessel was manned by men-of-color! Oh, no! Shots were heard. The local boat fled. And, of course, the grinning mercenaries collected the bonus for ‘services rendered’ despite the growing suspicion that something was a bit too fishy and a little too convenient.”

“The world is a wicked place,” said Carolyn.

“Exactly,” I agreed. “And I am a child of the 1960s. I didn’t want to sell out for a long time. Now, frankly, we need-the-freak’n money! I could be the next Blackwater of Yachting!”

“Boy, Fatty,” Carolyn said, “you are really full of it today. Did you find a gram or two left over from the ‘80s in the bilge or something?”

“Insurance!” I cackled, surfing the intoxicating waters of modern merchandising. “Why not offer Offshore Storm Insurance to guarantee, for instance, that if you’re vessel is lost and you are drowned in a storm with winds gusting over 50 knots … that, well, I’ll keep your money safe and dry!”

“I don’t know how to break this to you, Fatty, but … your behavior over the course of the last five decades or so has been … well, rather erratic. Perhaps you aren’t the best person to head up a Rally for Sane Sailors.”

“You mean that time in the chicken coup in South Africa? When the FBI knocked in Chicago? That time I was kidnapped in the desert somewhere in South America?”

“Now, now,” she mewed sympathetically, “don’t upset yourself reliving the specifics, okay? Just relax. Social Security is just over the horizon. Your books are selling well despite their content. Perhaps now is a good time to rest on your laurels. Lots of people who have never met you like you. Why blow a good thing?”

“I guess you’re right,” I said. “Success is the one thing I’ve never experienced and, perhaps, I am a bit long in the tooth for such new tricks. Besides, I don’t want to be ‘morally tempted’ by large sums of money …”

“… not to worry,” Carolyn said while patting my bald head, “not to worry!”

Fatty and Carolyn Goodlander are currently in Indonesia, the world’s largest Islamic country, warning them against the Jehovah’s Witnesses.

Cap’n Fatty Goodlander has lived aboard for 53 of his 60 years, and is currently on his third circumnavigation. He is the author of Chasing the Horizon and numerous other marine books. His latest, Buy, Outfit, and Sail is out now. Visit: fattygoodlander.com