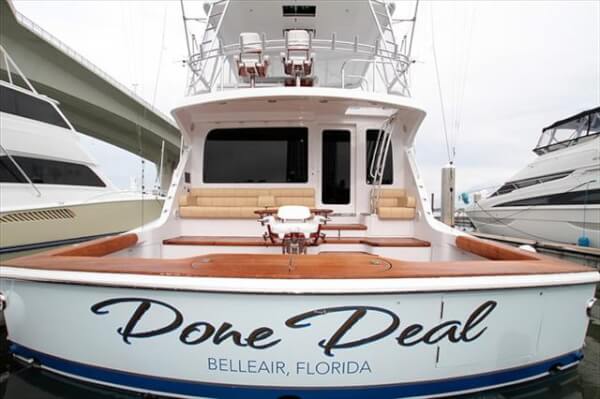 The Suncoast Saltwater Shootout takes place at Marina Jack in Sarasota, Florida and is billed as “the biggest and ‘funnest’ tournament on the Suncoast.” Team MarineMax/Done Deal will compete for a portion of the $100,000 in cash prize money and the will be up against some of the biggest sportfish boats and best captains from all over the Gulf Coast.

Team MarineMax/Done deal plan on maximizing their time on the water fishing by getting underway Thursday night after the captains meeting concludes and remaining offshore until Saturday’s weigh in at 6PM. The team will enjoy the comforts of the immense 4-stateroom, 4-head layout during down times and the extremely large cockpit that allows the team to move about freely and the air conditioning over the mezzanine will help knock down the heat while trolling for marlin or fishing for swordfish.

The air conditioned bridge has side by side captain’s chairs situated so a spotter and the captain are side-by-side with plenty of room in front of the console for a crowd of spectators. The tuna tower with control station, puts the operator high enough for spotting breaching bait and birds from great distances.

“I am excited to get a chance to fish this awesome boat,” commented MarineMax Fishing Team Captain, Travis Fraley. “Done Deal is a custom build with many fishing and electronic options that will help make Team MarineMax/Done Deal exceptionally competitive and we are out to win this.”

Cheer on Done Deal and Team MarineMax on Thursday, September 12 at the Suncoast Saltwater Shootout at Marina Jack located in Sarasota and on Saturday, September 14 at the weigh in.