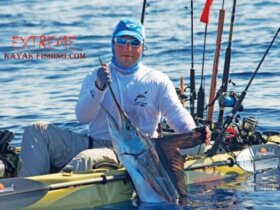 Smaller yet just as spectacular is a great way to describe the 2018 St. Martin Billfish  Tournament, presented by Delta Petroleum. Nine boats, carrying sportfishing teams from St. Martin, St. Croix, Antigua and Trinidad cast off in the two-day tournament fished out of Marina Fort Louis, in Marigot, 22-23 June 2018. By lines out on the last day, it was St. Martin’s Stephan Petit’s 39ft Contender, Yellow Whip, that won Best Boat, and with the release of two blue marlin and one white marlin, Petit was also named Top Angler.

“Both days were hard because of the weather and the sargassum weed in the water,” Petit said. “All boats were fishing Marlin Boulevard to the east of the island. The first blue marlin that we released was on the first day on a pitch bait with a circle hook. The second day we caught the white marlin just after lines in, and the second blue was caught a couple hours before the end of the tournament.”

Petit earned extra points for the use of a circle hook, which does less damage to the fish when released than the traditional J-hook.

The St. Martin Billfish Tournament is a qualifying event for the prestigious Lucas Oil Offshore World Championship, held annually in Quepos, Costa Rica. Their Best Boat win earned the Yellow Whip team entry, and a chance to fish against the best angling teams from across the globe for the world champion title.

All blue marlin were released. No team landed a blue marlin to beat the tournament record of 809lb, which would have earned them a brand new 25ft Contender Bay Boat, a perennial prize from sponsor, Contender Boats. The tournament did have a brand-new weigh station this year on the Marigot Waterfront, thanks to Farwood Construction Bois.

“We knew we were going to have a lower turnout due to last year’s passing of Hurricane Irma, but the show must go on and this year’s 21st edition was as fun as any other year. All the boats that came really cared about supporting the tournament. The competition was great, and the parties back in Marigot were the biggest we ever had. With Caribbean Flavors Food Festival going all out this year, all of Marigot was one giant party. Next year we expect a great turn out for the St. Martin Billfish Tournament and can’t wait to see everyone back again,” Petit said.