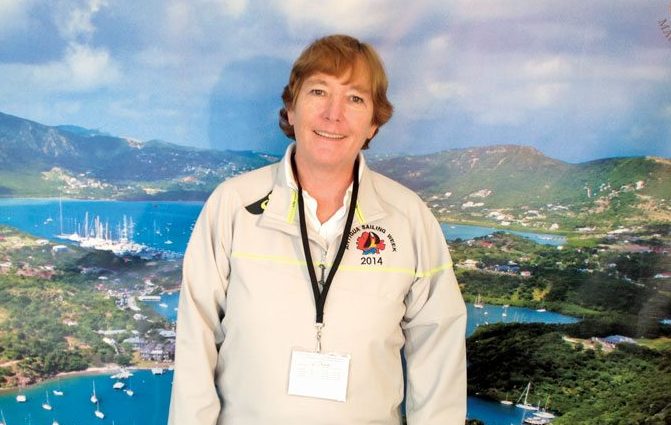 Distance races are a hot trend in Caribbean racing. Witness the phenomenal popularity and record attendance of Antigua’s RORC Caribbean 600 and most recent inaugural 165-mile Full Moon Race in the BVI. Puerto Rico’s Borinquen Island Sailing Association (BRISA) revived this type of racing on June 30 with the first annual Spanish Virgin Islands 100. Eight boats registered and four, with sailors from Puerto Rico and the U.S. Virgin Islands, made history by competing in either CSA Racer or PHRF Cruiser classes.

“Slowly big sail has returned to Puerto Rico. After many years without any sailboats racing above 35-feet, we now have many big boats racing, at least in cruising type events,” says Sergio Sagramoso, who sailed his Grand Soleil 58, Lazy Dog, to first place in the CSA class. “With that in mind, long time fellow racers Jose Teixidor, Fraito Lugo and I started thinking of reviving the Around Puerto Rico race, the islands premier ocean race that had been dead for at least 15 years following the demise of the local big boat fleet. After many rum and cokes together with Graham Castillo from BRISA, we came up with a friendlier, more fun race which we dubbed the Spanish Virgin Islands 100. The race, an overnight event close to the summer equinox with maximum daylight hours, was indeed a lot of fun.”

BRISA has hosted sailing rallies with stops in Puerto Rico’s offshore islands of Culebra and Vieques for the past three years. The new challenge was to design a non-stop race geared towards revitalizing offshore racing. In the end, the Spanish Virgin Islands 100 featured two courses: a 100-nautical mile route for boats over 50-feet and an 80-nautical mile course for vessels 30- to 40-feet. Both started just offshore from host Puerto del Rey Marina in Fajardo and both fleets headed east towards Culebra. The bigger boats continued to Sail Rock and the small ones over to Grampus Shoal, east of Culebra, according to principal race officer David Kerr. Both classes, from their respective points, went next to Punta Este in Vieques and ran the south coast of the island. Once they reached the west side of Vieques, the big boats headed to Palomino Island and then back to Puerto del Rey to finish. The small boats rounded Cabeza de Perro before they finished.

“A highlight of the upwind leg was seeing Sergio’s Lazy Dog go past us at an amazing rate of speed and upwind angle, knowing that their class started an hour after ours.  Not too long after, we had the pleasure of seeing José Teixidor’s Cachondo (GS52) going past us chasing Lazy Dog in the darkness of the night,” says Carlos Selles, whose Bavaria 44, Glory Days, won the PHRF class. “As the night got darker, some of our crew became concerned and didn’t want to leave the cockpit to go sit on the rail for weight. Then, when the nearly full moon finally came out at 2105 through the Sahara dust haze, the entire attitude of the crew transformed from one of silence and apparent concentration to an almost festive one. The moonlit downwind leg on the south side of the island was a pleasant one and allowed some of the crew to rest, before the last leg back to Fajardo.”

“The race was indeed a lot of fun and I think it very much served its purpose of teasing people back into long distance racing in a fun friendly way. We truly enjoyed the sunset at sea while racing competitively and will certainly enter again next year. I am equally certain that after this inaugural race breaking the ice, we will have many more competitors next year,” says Sagramoso.

Organizers have already started planning the 2019 Spanish Virgin Islands 100, which will take place near or on the full moon in May or June. For more information, visit: www.brisaweb.net or www.facebook.com/BrisaSailing