The Skinny on Ham Radio, Fatty-Style 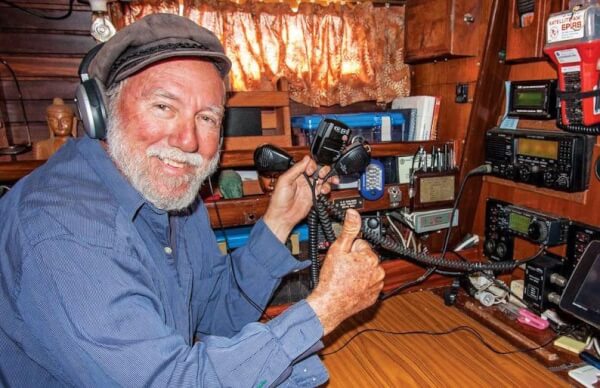 Up until recently I recommended that all circumnavigators have valid, legal amateur radio (ham) licenses. Sadly, I no longer do. This isn’t to say shipboard ham radio is dead. It is not. In many ways it is better than ever. But new technologies (for better and worse) have supplanted much of the practical need for HF SSB amateur radio communications afloat.

In a sense, the ‘amateur radio concept’ worked all too well. The intention was to nurture an ever-expanding group of electronically savvy telecommunication dudes and dudettes (females are YLs and ex-Young Ladies in ham lingo) and to encourage experimentation.

The happy worldwide result was that—when the concept of personal computing arose—there were millions of techno-savvy international radio nerds ready to jump on the global bandwagon.

Ham radio started in the late 1800s. By 1909, the Blue Book of Stations listed 89 amateur operators. That number has now expanded globally to 2.7 million, with the vast majority of current operators in Third World nations.

My own history begins on my father’s lap (K4NXQ) aboard the schooner Elizabeth. Listening to him communicate with the outside world from remote anchorages seemed akin to magic. Another early memory is watching a guy on a beach ‘moon-bouncing’ to his wife in England with a one-watt HH walkie-talkie. Wow! I started studying for my ticket (license) at nine years of age. I passed the FCC exam at twelve, becoming WN9NTY (Never Too Young) in 1964. By 1968, I was tooling around Chicago in my Chevy Chevelle with a Two Meter rig—in essence, an automotive cellphone 30 years before the average American. (Later I became WB1CYE in Boston {Cruising Yacht Enthusiast} and am currently W2FAT).

Not only was my father a ham—but my wife Carolyn (NP2MU, Miss Universe) is too. Carolyn actually has an Amateur Extra class license, strictly for super-nerds. My mother, one sister, and brother-in-law are all hams, as are numerous other
family members.

Why, in this day and age when paddleboarders are yakking on their Iridium GOs (the GO stands for go-to-the-bank), is amateur radio still fun (if not necessary)?

First off, ham radio is all about community, safety, and international communication—all topics dear to a circumnavigator’s heart. Plus, it is free in every way. (By law, you cannot charge for any communication on the ham bands.)

Nobody welcomes you into, say, South Africa because you have a Satellite Phone. But ZS1SAM (and dozens of other African hams) and I became good friends as I transited the Indian Ocean westward.

Even better, Colin ZS1RS in Cape Town had an amateur WINLINK shore station that we used for free (non-commercial) email. (There are hundreds of these ham-exclusive free email stations worldwide. We contact them twice daily to check our email while offshore.)

It was quite a party when we arrived in Cape Town, with numerous ‘homebrew experts’ helping us tune up our (radio) rigs and many local weather routers vying for our attention.

When we were hit by lightning off Sri Lanka, Indian hams fixed our HF (high frequency) radio for free because Sandeep (Google Fatty Goodlander and VU2MUE for more info) sent an email to all the local hams in the Cochin area stating, “We must fix the Revered Captain Fatty’s radio—the honor of India is at stake!”

SSB radios are analog devices but we have a German PACTOR modem that converts our signal to digital. Thus we can get our email, GRIB WX files, certain types of WX charts, etc., via SAILMAIL (commercial) or ham radio shore links.

This works ship-to-ship as well. While chatting with a fellow shipboard ham 2,000 miles away, I realized he needed a certain technical graphic I had—so I zipped it to him on 20 meters ship-to-ship (no shore station involved) via PACTOR SSB.

If the above intrigues you, check out ham radio. If it sounds like boring gobblygook, well, GO to the bank. We have friends currently circumnavigating on the same amount of money other friends are sending to Iridium. Each to his own. 73s (bye!) for now, as we hams say. (88s are kisses!)

Editor’s note: The Goodlanders are currently hamming their way up the South Atlantic bound for the Caribbean, where they will end their third circumnavigation (before starting another).