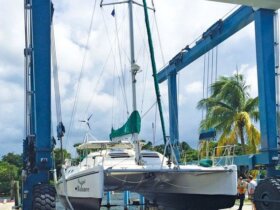 Multihulls – Do Your Homework Before Hauling

Several classes were too close to call going into the final day of racing at the 44th St. Thomas International Regatta (STIR), held March 24 to 26 out of St. Thomas, U.S. Virgin Islands. The reason? A mix of STIR-signature round-the-island courses combined with conditions that ranged from near breathless calm to blustery gusts over three days of racing that kept competitors on their toes and trading places on the scoreboard with classmates right down to the last finish. Of course, warm weather, picture-perfect turquoise seas and the regatta’s STIR up the fun Caribbean vibe brought out the best in everyone.

“We went into today knowing there would be two races,” says St. Thomas’ Peter Corr, who helmed his King 40, Blitz, to victory in Spinnaker Racing 1 with a crack 10-person crew that included talent from as far away as Australia and New Zealand. “We wanted to win both races, so our goal was to be careful, to not make any errors or get protested. We did just that, and the win was thanks to a great combined effort and team work.”

“I got up early this morning and said to myself we have everything to lose,” says Leonnig. “By the time we headed out to the race course, the thought was to just relax, go sailing and have fun. Then at the start of the last race I began trying to overthink it. I stopped myself and went back to doing what we’d done throughout the regatta: get windward and get off the line fast. It worked. It was so incredible to be out in front of the class on that last race. Just pheromonal.”

In the Non-Spinnaker Racing class, there were lots of happy faces on crew members aboard Varuna, a VAr 37, which bested St. Thomas’ Kevin Gregory’s Beneteau First 44.7, Odyssey.

“We both had seven points going into today,” says Martin van Breems, founder and owner of the Sound Sailing Center, in Norwalk, CT. “Odyssey is a local boat and its sailed well. In the last race, we were slated to finish second. Then, Odyssey ended up not sailing the course properly and retired. It was a thrill for us to win. I’ve been sailing here for sixteen years and this is the first time we’ve won our class.”

The one-design C&C 30 and IC24 classes reveled in the razor-sharp competition.

“We’ve come together over as a team over the last few months, having had a practice session together in the fall and then doing Key West Race Week,” says Jason McShane, crewmember aboard C&C 30 Class winner, Flying Jenny. “The boat was really well set up for the conditions. We have a sail program that’s awesome, both quality and set up wise and that helped us a lot.”

Puerto Rico’s Fraito Lugo won the IC24 Class for nearly the dozenth time aboard his Orion. After twelve races over three days, there was only a five-point difference between Orion and second place finisher, Sembrador, sailed by Puerto Rico’s Ramon Gonzalez.

“We came into the last day as the defender,” says Lugo, whose crew included his 14-year-old son, Alejandro. “Sembrador really came on aggressively and were on the offense. They won two of the five races today. But in the last race we finished second, ahead of them, and were able to put points between us.”

It came down to a tie-breaker to decide the winner in the Large Offshore Multihull Class. In the end the HH/MM Nala, bested the St. Croix-built Bieker 53, Fujin, owned by Greg Slyngstad from Sammamish, WA.

“This is the first regatta we’ve done on the boat since we launched her late last year and were extremely pleased with how the boat performed,” says Gino Morrelli, president of Newport Beach, CA-based, Morelli & Melvin, who designed and crewed on Nala.

“We have lots of experience. Both Sandra Tartaglino and I have each sailed beach cats for over 30 years. Today’s races were distance races offshore with the spinnaker boats. That made us really need to think about tactics. For example, we didn’t want to get in the wind shade of a large yacht,” McKenna says.

STIR is a world-class event renowned for its fantastic round the buoys and round the islands racing, first-class race committee, superb shoreside festivities and friendly can-do attitude towards its competitors.