Antigua’s Wobbly Race, a build-your-own-boat contest, has two simple rules. No engines are allowed and each vessel must incorporate two pieces of paper thin plywood. On the flip side, imaginations are allowed to run wild. Cheating is openly encouraged. There are no size limitations and material selection is at the discretion of each team.

A novel theme generates much of the competition. This year, rock stars and their adoring groupies were on site wielding tools, adhesives, rope, and buckets of cold Carib beer. Beatles tunes poured from a nearby megayacht as the ‘Fab Four’ constructed their Yellow Submarine. The Kiss Army wore pounds of make-up, which might have caused the stability issues they incurred on the water. Moves Like Jagger rocked more than their screwy vessel because smartly, they left Keith Richards at home.

It’s a silly event raising serious money in support of ABSAR- Antigua Barbuda Search and Rescue. Staffed by volunteers, the non-profit organization provides 24 hour coverage, 365 days of the year. Members were in attendance during the three hour construction phase in case a hammer ran wild. During the race the rescue boat stood by – ready to assist should one of numerous capsizes spin out of control.

Eight teams toiled in scorching sun at the Catamaran Club, torturing plywood into a variety of box-like shapes or, in the case of One Stroke, simply layering it between an already made craft.

Ready or not the vessels were carted to Cambusa Restaurant, paraded past the beer table, and down the road on a convoluted route through the boatyard to the beach, where the fun began.

Knowing that the start resembles a highway pileup, boats left haphazardly in two heats. No team forged a lead nor stood out as the clear winner but everyone got very wet. Paddles flew in random arcs, while some who fell overboard simply gave up. The course was short but arduous. Downwind to the dock, hard to starboard, then past the finish marker earning every boat a cannon blast.

After lengthy deliberations (to ensure everyone won) the committee called teams to collect bags of loot and of course, more beer. The coveted WC (Wobbly Club) WC (Water Closet) was accepted by first place winners, team Rock Star, who clung to the miniature outhouse as if it was pure gold. 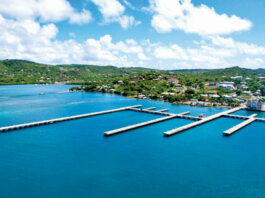 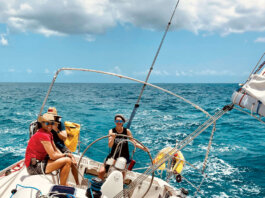