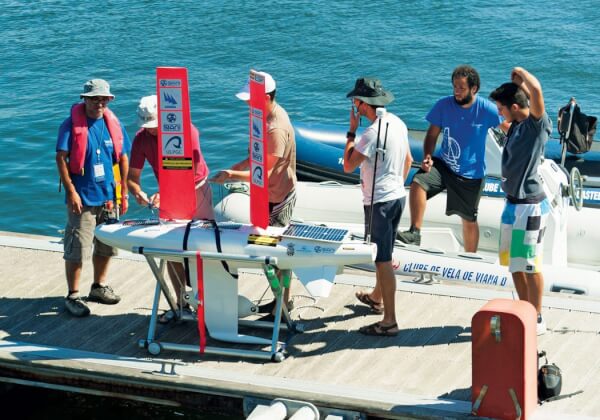 Captain-less boats? It may not be a far-fetched idea, especially in an age where self-driving cars make headline news. In fact, the innovation of self-driving, drone, robotic boats or yachts is the subject of intense research spanning everything from cutting-edge competitions to private companies seeking out practical solutions to everyday marine problems. It’s an area that may launch something new to the recreational boating industry.

Designers of the world’s best self-driving sailboats compete annually at the World Robotic Sailing Championships. Last year, the event was held in Portugal and included a scientific conference.

“The basic mission for robotic boats, that is, sailing through a set of pre-programmed waypoints, is now commonplace among the several global research and development groups. For example, maneuvers such as sailing upwind, tacking, sailing downwind and gybing can be handled by a small and low power onboard computer that controls a set of servomotors to keep course and trim the sails,” explains Jose C. Alves, associate professor in electrical and computer engineering at the University of Porto, in Portugal, who spoke at the conference. “However, the ability to adapt (or resist) to adverse wind and sea conditions is a different matter. One project that has been successful at doing this is the American company, Saildrone.”

Saildrone designs and builds small autonomous wind- and solar-powered trimarans. The Alameda, California-headquartered company enjoyed its first major success in 2013 when its bright orange, 15-foot model sailed unmanned from San Francisco to Hawaii. Instead of entering the Transpac to race, Saildrone researchers are honing their vessels to conduct scientific research such as gathering climate data and doing so in harsh conditions such as the Arctic.

On the East Coast, Sea Machines is also building its own concept of self-driving work boats. These are designed, says founder and director Michael Johnson, for dull, dirty or dangerous jobs such as long duration surveying and oil spill response and clean up. The Boston, Massachusetts-based company currently offers three models: a 20-footer perfect for positioning autonomous underwater vehicles; a 24-foot converted military model useful for surveying and station keeping; and a 32.5-footer best for nearshore or offshore jobs like environmental sampling, hydrographic surveying and data harvesting.

“Our core technology is our autonomous control systems, which can be operated as direct wireless remote command or via autonomy computer which uses programmed workflows to guide the craft. Positioning and telemetry is primarily based on DGPS (differential global positioning system). This first generation of technology is developed to be installed in any craft less than 50-feet in length. Our customers are primarily in the industrial and commercial work boat industries,” says Johnson.

Another application for self-driving vessels is in providing ‘green’ transportation in the cargo shipping arena. Famous luxury automobile manufacturer, Rolls Royce, is working to turn this concept into reality.

“We are working on situational awareness systems which integrate data from high definition and infra-red cameras, lidar and radar into a detailed analysis of the ship’s immediate environment. This analysis can then be either transmitted back to a remote operations center where it is converted to a visual display for an experienced vessel skipper to take the appropriate decision or used by the ship’s onboard computers to generate the appropriate next action,” explains Simon Kirby, external communications manager at Rolls-Royce Marine, in Derby UK, who envisions a remotely operated vessel such as this in operation in local waters by 2020 and a decade later for unmanned ocean going vessels to be a common sight on the ocean.

What does self-driving boat technology mean for the recreational side of the industry?

On one hand, says University of Porto’s Alves, “While some degree of automation such as electronic autopilots and more recently computer controlled motorized winches are naturally desirable and even essential for reduced crew situations, autonomous or robotic sailing is not for recreational boating or racing in my opinion. People sail for fun.”

On the other hand, adds Sea Machines Johnson, “The value for recreational boaters will be using autonomous control systems as a real-time overwatch to ensure the safety of those on board. In fact, we conducted our own analysis of the recreational boating industry in the U.S. and we found that the fatality rate of boating is around eight times that of automobiles. The average American will spend 650 hours a year driving a car but the average American boat owner will only spend about 30 hours operating his/her boat. This means that most boat operators are not very experienced. An autonomous overwatch system could keep a vessel safe by assisting to maintain its course while avoiding collisions and groundings.”

Finally, will self-driving boats make crews obsolete? Yacht captains don’t have to worry about hanging up their shoulder boards any time soon.

“While technology and innovation continually push the marine industry forward, direct human interaction is, and will be, a necessary component, as the vessel is a platform on an unstable surface (water),” says Phil Purcell, chief executive officer and executive director of the Marine Industries Association of South Florida. “That is different from terrestrial automation (cars) or controlled airspace (drones), and the level of judgement and service required in yachting won’t disrupt humans in those spaces.”

For Blue Water, a Man-Overboard Alarm is a Must