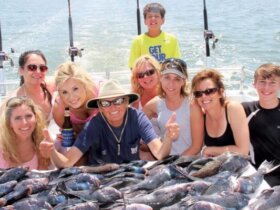 “We fished east of Anegada yesterday when we released two and in the same place today for the three,” explains Revenge’s Capt. Mike Lemon. “The bite this morning was slow until around 11 a.m. Colin (Ross) released the first blue, Sam the second and Colin the third all before 2:30 p.m. The fish were in the 250 to 300 pound range and aggressive. I hope we’re lucky tomorrow. It’s still a long way until the finish.”

In third place is the 68-foot Hatteras, Gulf Rascal, with four blue marlin releases. Gulf Rascal also wins the unofficial ‘Sportsmanship’ award for towing fellow tournament boat, Over Easy, back from Anegada until well past midnight, after it ran into mechanical troubles.

The Over Easy wasn’t the only boat in the tournament to suffer this fate. The fleet was down one boat today after the 58-foot Buddy Davis, Free Spool, experienced mechanical failure late in the afternoon on the first day of fishing and right after angler Jay Fowler released the team’s lone blue marlin.

“We were heading back from up off Anegada when we noticed the boat was only doing 27 knots,” explains Free Spool’s Ft. Collins, Colorado-based owner and angler, Curt Richardson. “Then the generator quit and when we looked in the engine room there was 2-foot of water, the transducer broke and water was pouring in.”

The crew jury-rigged a temporary solution and limped the boat back to the marina. In the morning, the lift in Soper’s Hole, Tortola, hauled the boat and repairs were made.

“We only lost one day,” says Richardson. “We’re looking forward to fishing tomorrow. This is the first time we’ve fished in this tournament.”

It’s not just adults who are angling to win this tournament. There are three teenage anglers registered, one each on the Reel Tight, Freedom and Deguello. It’s was Deguello’s 17-year-old Mason Domel who experienced the fight of a lifetime on the first day when he fought a big blue marlin for over 4 hours until he lost it at the end.

“I was excited to see what it looked like, especially after I fought it so long,” says the Austin, Texas-based teenager who was fishing with his family on the 48-foot Cabo. “At least it showed me how to better handle the rod. I’m ready for tomorrow.”

A total of 31 blue marlin were released by the twenty-six boat fleet, totaling 52 in two days of fishing.

On Thursday at 7:00 p.m., enjoy Cheese Burgers in Paradise. The Boy Scouts invite visitors and locals alike to their cookout at Camp Wahoo, located under the AYH tents. Tickets are available for the meal as a donation to the V.I. Council, Boy Scout of America.

The public can catch the spirit of the sport by walking the docks and watching the big rigs come in around 6:30 p.m. The number of flags flying from the outriggers indicates the number of marlin released by that boat for the day. Anglers in this conservation-oriented tournament have not killed a blue marlin since 1986. Commemorative tournament T-shirts, hats and more with original art designed by famous marine artist Guy Harvey will be on sale each night of the event.

The ABMT’s Awards Ceremony takes place Saturday evening along with the naming of the 2012 USVI Open/Atlantic Blue Marlin Top Angler, who pockets a $10,000 cash prize.