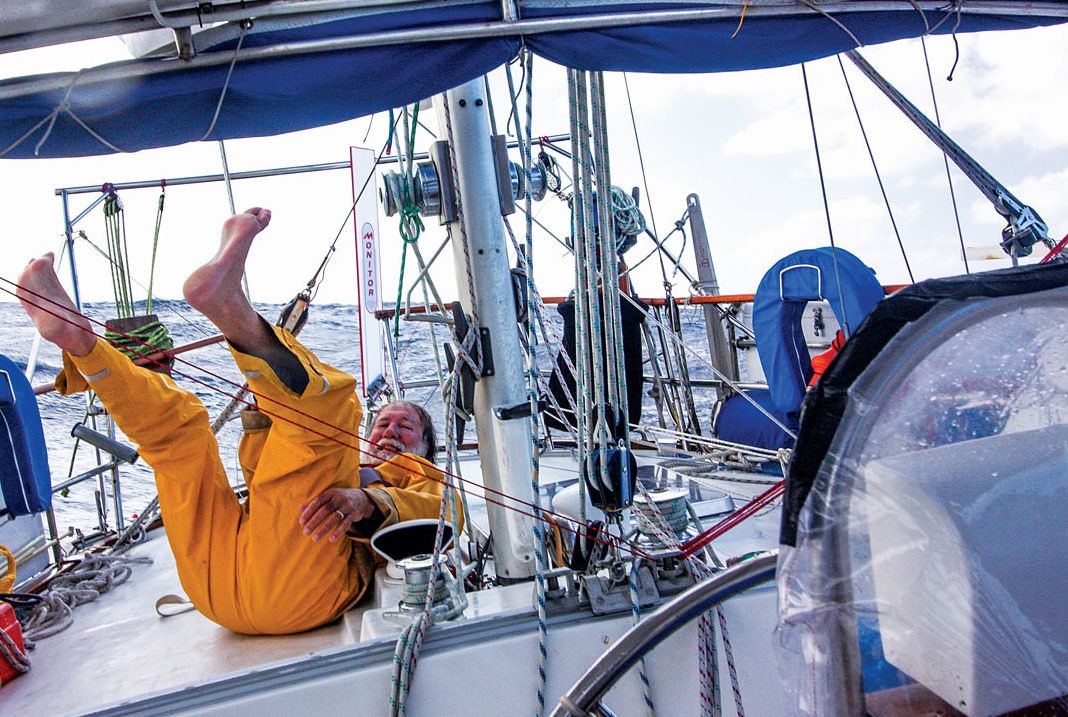 The problem with being a delusional marine journalist is that, sooner or later, you begin to believe your own swill. Let’s face it, you don’t get paid for writing the truth about boring people. There’s a professional tendency to ‘over saturate’ both the photographs and the facts. Once you begin to consciously inflate the person you are interviewing, it sort of inadvertently spills over onto your own mirror. Here’s the truth: I’m a 40-year-old, muscular, well-hung, intelligent sailor with a headful of thick hair in my own mind—why not allow a little of that fantasy to leak out on the page?

A secondary problem is that my income is erratic.

Occasionally I discover a new writing market with particularly dumb editors but for the most part all the yachtie-snotty publications pay me what I’m worth, which isn’t much.

So there I was in New Zealand—bald, dumb, semi-senile, and dead-broke—attempting to please my ancient trophy wife, whose sad life afloat I’ve objectively ruined. (The only way our marriage makes sense is if reincarnation is true and she’s atoning for a sin in a previous life.)

The Perfect Boat – Not!

All that is the downside. The upside is that there are many shipyard dumpsters in Whangarei, New Zealand, and I’m the Jacques Cousteau of diving ‘em. Yeah, I’m one of those sicko dudes who wander around the international shipyards finding corroded remnants of discarded zincs while screaming, “…good as new!”

In addition, I’m not above begging. I mean, why not hang around traffic jams outside yacht clubs with a sign around my neck that reads, “…will work for unopened tubes of 5200!”

…nor am I against strong-arm crime—wouldn’t any cruising sailor kill for a gallon of West Epoxy with the appropriate resin pumps?

…why, if it wasn’t for that dried up crud at the bottom of tossed-away bottom-paint cans, I wouldn’t have any antifouling at all.

So what if my antifouling is always the color of dark green puke—the fish don’t care.

Worse, when I say ‘work on stuff’ I really mean destroy it with sophisticated tools. Yesterday was a perfect example: I attempted to replace the two dollar lip seal in my Jabsco 50440-1401 raw water pump—and bent the thousand dollar bronze pump body like a pretzel. Oophs! (I hung my head in shame as my wife screamed at the skipper of the ketch Rewa, “Never lend him a wheel-puller again, Dave! Every marine mechanical device he works on ends up as twisted as his morals!”)

But my wife’s immediate problem was obvious—our galley top with its sinks and faucets and stuff had rotted and fallen into the bilge amid a mist of damp, punky plywood. “So do something,” she yelled. “Our shipboard roaches have no home!”

That’s the problem with boats—hang around long enough and you end up on your knees on all levels.

Now it wasn’t that difficult to ‘liberate’ enough unguarded wood to rebuild the galley—but while doing so I broke a weak aluminum Freon tube to our Danfoss BD50 compressor and put a 2×4 through the glass face of our rusty propane cooker.

Thus, by the time I got our sinks working—our Force Ten stove was scrap metal and our refrigeration was kaput.

Did I mention the head backed up? And the smoke got out of our VHF? And one of our steering cables stranded? And I discovered our 10-millimeter galvy chain hasn’t seen any galvy in years and is now, in spots, about two millimeters of rust-only chain?

Or that our windlass motor’s brushes are so bad that it would have difficulty picking up our Rocna anchor even if it was made out of balsa?

Savannah, Georgia – An Ideal Destination for a Refit

…which reminds me of our book CREATIVE ANCHORING. My wife came to me and asked to tell her everything I know about anchoring. “More scope,” I said.

“Only two words?” she asked. 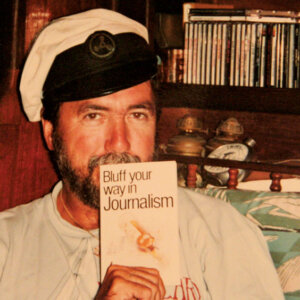 “Could you stretch that out into, say, four hundred pages of prose?”

How do we get off on these tangents? Weren’t we talking about my amazing ship’s husbandry skills?

Did you know that, even if you water ten year old 12-volt lead-acid batteries, they aren’t really ‘full of juice’ no matter how much they appear to be?

…nothing makes sense in the marine sphere—like why they call it pleasure boating. How sick is that?

I mean, even a sailing masochist might balk at referring to yachting as recreational boating—not unless ‘suffering afloat’ could be considered an aquatic hobby.

Of course, we can’t currently afford a berth in New Zealand. Instead we’re up a dreary river in a mud berth.

A few days ago we were rowing ashore with our tree branches (let’s face it, oars are too expensive) and a lady on the riverbank shouted, “Are you from the shipwreck?”

I sat proudly and said haughtily, “Ship, yes. Wreck, yes. But shipwreck, no. I intend this water-borne lifestyle—as hard as that is to believe.”

People think I’m cheap—HA! I’m just worried about global warming and want to leave a small carbon footprint. Thus I chop the chafe out of my jib sheets and retie them back together with double carrick knots.

Other money saving tips—using electrical ties to hold your lifelines together.

Aren’t you happy I’m a world-renown ‘marine expert’ who is willing to share fruit from his tree of knowledge?

Of course, there’s considerably more strain on your standing rigging—thus I recommend hose clamps on the one-by-nineteen if you plan on going offshore.

Here’s an additional ‘bonus’ hint: bobstays carry the most load of any piece of standing rigging—thus both hose clamps AND duct tape might be required on heavy displacement craft.

So that’s what I’m doing. I just sit around my boat and attempt to glue back on all the ca-ca stuff that falls off her. It isn’t easy. Occasionally one of my repairs sort-of works and I sort-of write it down—then wait for the pennies to pour in.

Yeah, tough job but somebody has to do it. (end)

Fatty and Carolyn are currently holed up on New Cal, writing yet another book—this one tentatively entitled “Fatty Needs Even More Money!”