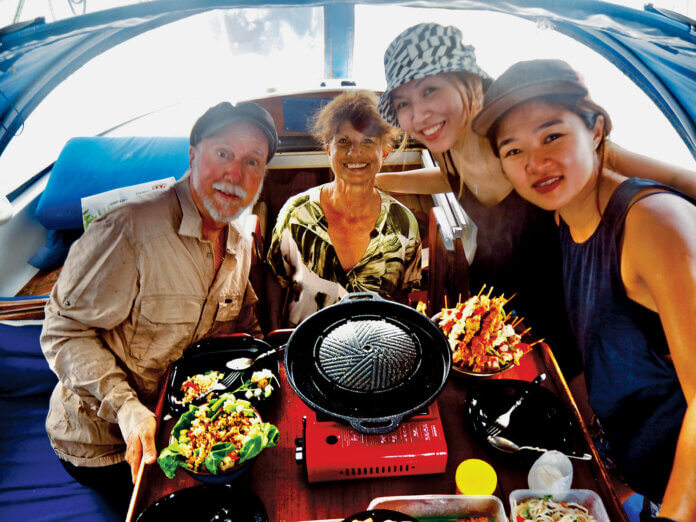 Up until 2000, a Caribbean sailor with a fair breeze would have been insane to be depressed—now, with our current state of world affairs that same sailor would be delusional not to be. Yes, our cup runneth over with international worry—of worldwide financial depression, mental depression, rising suicide rates, and shrinking expectations.

I mean, even the Queen gave up!

Let’s aim this marine column directly at the younger generation—no matter how dismal, difficult, or limiting your parents’ tawdry, pointless little existences were, your life is gonna be far worse… assuming you survive for, say, half as long.

Oh—and don’t forget the nuclear worry. Not that I have any doubt my noble country of US of A could handily win the Mutually Assured Destruction (MAD) tossing game. That’s right—when it comes to making the planet uninhabitable for the next 5,000 years, I believe in American exceptionalism!

Worse—the standard solutions of getting drunk, getting high, or getting laid no longer seem to apply. Liquor is bad for the liver. Drugs are not only illegal—but nowadays they auto-arrest you (with a robot from Boston Dynamic, no less) for chemical-coping-in-any-form.

As far as sex goes, forget it—not only are STDs rampant, partners increasingly prudish, and licentiousness now frown on—but the sperm counts are falling worldwide (should procreation be your sick, sick, make-my-offspring-suffer-horribly kink).

And the increasingly vocal incels blame all this on, of course, on any woman with enough criteria not to sleep with them!?!

Why bother getting (it or yourself) up?

On the positive side, Russian mega-yachts are dirt cheap right now—the docks of St. Thomas, Sint Maarten, and Antigua are cobwebbed with ‘em. On the downside, Ukrainian marine engineers in Mallorca are finding employment scarce—I mean, why pay a talented grease monkey like the 55-year-old Taras Ostapchuk to sink your boat before it is seized by a Western country that is suddenly-pretending-to-have-a-conscience?

What do the yachts Lady M, Lena, SY A, Dilbar, Ragnar, Crescent, Sechin, Valerie, Lady Anatasia, and Royal Romance… all have in common? They’re jailed/impounded. All around the world. With all their water toys.

Hey, don’t get me wrong—I’m totally in favor of stealing vessels obtained with stolen cash—it is just that I’m shocked this is suddenly a socially-approved, NATO-sanctioned ting, mon! 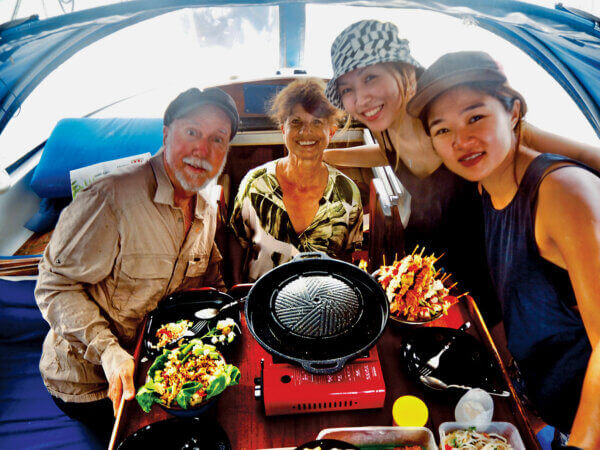 Oh, I remember the glory days of the Yacht A (the stinkpotter, not that ugly $800,000,000 blow boat) when we envied Andrey Ignorevich Meinichenko’s Whoopie Room with all its whips, chains, and video cameras… ah, the carefree, healthy, fun international yachting scene, ruskie-style.

I’m not joking about the Whoopy Room—the most notorious cabin on that decadent vessel. While it was anchored off Moorea, my wife and I sailed close alongside on port tack. I shouted, “Just let us use the whoopie room for half an hour!” while my wife, less prone to exaggeration, shouted, “Two minutes will do!”

This reminds me of another Randy Andy—whose press secretary informed me when I inquired how he was doing, “No sweat!”

But isn’t that new three-master of Andy M’s (we’re good enough friends that I call him by his adorable nickname) full-ugly or what? Somebody told me it was stark—hey, it is waaaaaay beyond stark. That freak’n thing is an insult to every French curve in existence!

And to think that just six months ago the United Caribbean Marine Industry were welcoming sleazy Oily Arks into the dock with open arms, steel drum bands, and dollar signs in their industrial eyes. What could go wrong? So, what if Putin was poisoning innocents in England and Europe—most of ‘em didn’t own mega-yachts that needed spare parts, did they?

I mean, so what if the Ruskies were killing Syrians, right? How many Syrians buy Harken blocks or Rule Bilge Pumps—very, very few! Why didn’t Syrians just shut up and take their lumps, right?

To phrase it another way, can’t the poor people who ‘elected’ to be on the wrong side of genocide stop constantly complaining? I mean, choices have consequences, right?

Whenever I start to chuckle about the overheated antics of a boiling population on a warming planet, I quench my giggles with the sobering thought of how many polar cruise ship companies will go bankrupt when the melting glaciers have literally ‘went south’ forever.

What’s gonna happen as a result? Polar bears are gonna strip down and go naked on Orient Beach, St. Martin? Will Eskimos trade in their snowmobiles for jet-skis? Will snow cones become lukewarm drinks? Will Canadians be prevented from getting drunk and going clubbing… their seals?

While constructing igloos, will the Eskies have to leave holes for the Carrier air-con units?

Admittedly I’m old but back-in-the-day, when a sailor wore a mask, he was going snorkeling! Speaking of breathing air—why is it still free? Think about it! Sure, in classy marinas maybe—but in public anchorages? On public beaches? For the hoi polloi? Do we really have the wealth to continue subsidizing the poor to this degree?

The trick, of course, is to make a profit while hotting-up the oceans—then buy a used air conditioned mega-yacht and install ever more, ever bigger air-con units… not only will you get cooler, the poor folk outside become warmer, ha-ha-ha!

Of course, in the Caribbean, hurricane season is never very far away—and the NOAA news that storm categories will remain the same for the first one-through-five categories is reassuring… that the additional 95 stronger categories will just be tacked-on to the top end.

Future sailors will brag about surviving ‘boom-caine’ storms—those with winds in excess of the speed of sound. Hey, just think of the waterspouts of the future—hell, it could rain Oily Arch boats just outside the harbor of Monte Carlo!

One thing I really dig (from a PR angle) is when the builder of one of these ‘over one bil’ mega-yachts decide not to put an additional birthday candle on the owner’s kid’s birthday cake—and then buys a full-page ad in BOATING INTERNATIONAL about how his ‘latest build’ is more energy-efficient than ever!

Or when Jeff and Elon get together, form an organization, and lobby that consumers should not be given straws… that straws should be rationed by being priced very, very expensively, ha-ha!

That’s right—they can have ‘em, we can’t!

Which brings us to the subject of whales—they poop in the sea, you know. (Well, according to a nasty press release by some very hungry Japanese people, they do.)

Why, for example, is everyone against the Great Pacific Garbage Patch? When we transited, a container of flip-flops had gone overboard during a blow—and we ‘boat-hooked’ up a dozen pairs of size 11 conveniently zip-tied together.

How cool is that?

Do any circumnavigators really think that islands that used to charge $3 to clear-in—and during the pandemic started charging three thousand dollars (combined charges)—are ever going back to three bucks?

I doubt it. Perhaps in the parallel universe but not on this earth.

Oh, I long for the days of celestial navigation when, while shooting the evening stars, I might see a falling meteor to make a wish upon—and not wonder if it was an incoming ICBM.

As a writer, I know enough to put a positive spin on things—for instance, why have your life raft inspected just before the apocalypse? There’s a saving! Or, maybe not. With inflation headed for double digits—perhaps waiting to pay in tomorrow’s shrinking dollar isn’t such a good idea?

During the two-year pandemic when almost everyone alive lost money, billionaires in the US saw their income skyrocket up 57%.

Fair is fair, I guess.

I personally believe in trickle-down. If the wealthy want to feed the poor, they just feed their thoroughbred racehorse corn… and then grin as the penniless follow behind the horse, hoping to get lucky.

What am I really trying to say during all these sophomoric ramblings? That I’ve based my entire watery life on the idea that this planet is a smorgasbord of endless delights—and that a small sailing vessel was the perfect way to inexpensively enjoy it. If Thailand is the current Garden of Eden, then sail to Thailand—or Tahiti, New Zealand, or Madagascar. That universal brotherhood was just around the corner—if everyone just voted with their keel. If the monetary competition was for happiness, equality, and justice—not pain.

Now, suddenly, all of that’s in doubt.

Where I used to clear-in in Southeast Asia for twenty bucks and twenty minutes, now takes weeks and costs $3,000 (before bribes). That’s depressing. Especially with an empty purse. And a ravenous, pent-up appetite for an open horizon.

On the other hand, I currently live in the world’s most expensive, safest city for pennies a day—something I’d never be able to do if I didn’t live abroad.

So, I truly don’t know whether to laugh or cry. So, I inappropriately giggle at evil and cry with compassion while witnessing good deeds… one confused sailor adrift on the sea of his own mixed-up philosophy.

On the other hand, yesterday I had a spanking good sail between Malaysia, Indonesia, and Singapore. The wind is still free. For the moment. Until Jeff Bezos figures out how to blister-pack it.

Bio note: Fatty and Carolyn are still ‘aground on their coffee grounds’ in Southeast Asia.

A Portal Into Hell

Book Review! “Sailing Towards the Horizon” by Birgit Hackl