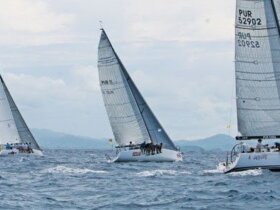 In the October 2010 edition of All At Sea magazine I wrote an editorial about marinas in Puerto Rico titled “Marina Hopping around Puerto Rico.” You can still read the entire editorial here: https://www.allatsea.net/marina-hopping-around-puerto-rico.

After a few years away from writing I am now back as a writer for ALL AT SEA and decided to research changes experienced by the marinas after hurricanes Irma and Maria almost destroyed the marine industry in Puerto Rico and the rest of the Caribbean back in September of 2017.

We limited our research to the marinas which experienced changes in ownership or have improved their facilities since our last editorial and that provide access for both motor and sailing yachts.

Let’s follow the same route we did back in 2010 and start in Fajardo on the East Coast of Puerto Rico and go south and west from there.

There are 6 marinas available to boaters on the east coast, located in the town of Fajardo. They all provide easy access to the Spanish Virgin Islands and offer great provisioning options with various local supermarkets, as well as Walmart, Costco and Sam’s, all within 45 minutes, by car.

If you are going to sail on to the US and/or British Virgin Islands or other destinations further east or south, Puerto Rico offers the most affordable provisioning in the entire Caribbean.

Puerto Del Rey Marina (PDR)
(www.puertodelrey.com)
The original developer and owner sold PDR to Putnam Bridge Funding LLC in 2013 and since then it has undergone a massive investment in infrastructure.

After the 2017 hurricane season a 1,500kw generator was installed making PDR the only marina offering a stable power source in the event of blackouts.

The recent infrastructure investments made PDR the best prepared Marina for a hurricane. As a result, less than 3% of the boats had major damages after the catastrophic Category 4 hit Puerto Rico. PDR just sold again recently to Safe Harbor Marinas.

(www.gcmarinas.com)
The 2017 hurricane season was both a curse and a blessing to Puerto Rico’s east coast boating community. The blessings started thanks to Italian businessman Giuseppe Cicatelli, president and founder of Bacalia Group, parent company of Grand Caribbean Marinas (GCM).

Thanks for Mr. Cicatelli’s vision and capital GCM is now the largest marina company in Puerto Rico with the acquisition of Marina Puerto Chico, Sea Lover’s Marina (now The Reserve), Villa Marina (now Renaissance Villa Marina), and the Sardinera Dry Stack, all four located in Fajardo.

With these purchases, Grand Caribbean Marinas now controls more than 2,200 spaces between wet slips and dry storage, and plans to invest $50 million to $100 million in the next five years. They are also the largest operator in the Caribbean as well as being among the top five marina groups with the most slips within the United States.

The scale and unique positioning of GCM further highlights the importance of Puerto Rico in the nautical industry thanks to its strategic location. For more information or to make reservations please call GCM at 787-863-0834

• Puerto Chico  (www.marinapuertochico.com)
Marina Puerto Chico is a Fajardo tradition, for over 50 years it has seen many generations of Puerto Rican boaters enjoy what they love. Puerto Chico is where I started sailing back in 1974 when my father bought a Seafarer 22 sailboat without knowing how to sail! Slip A-6 became my home away from home. Now under GCM management things can only get better…

• Renaissance Villa Marina (www.gcmarinas.com)
Has the only covered dry stack in Puerto Rico, which will be completely remodeled. The facilities will have a private entrance and an exclusive VIP service to take the boat owner experience to the “next level,” the company said. The marina also has its own boatyard, which will operate the maintenance and repair of ships up to 100 feet for the entire Grand Caribbean Marinas complex. One of the main benefits of Renaissance Villa Marina is that it offers maximum protection during hurricane season. The founders of El Makito, a well-known restaurant in Naguabo, plan to open a new gastronomical venue on the grounds of the marina called Sea Side Grill.

If you love this, you’ll also love:

Continuing to the east / south east…

Marina de Salinas
The blessings for the Puerto Rico boating community continued on the south coast at Marina de Salinas when local business people Julian Hernández and Ruth Gago, decided to purchase and transform the marina with an investment of $8.5 million dollars. When they purchased the marina in 2018 the docks along with their electrical service were entirely under water until the renovations were started in 2019.

Besides dock renovations, they also remodeled their hotel and added a new convention center for activities with space for up to 150 people.

Their marina now offers 122 slips with future expansion in the works, plus 10 transient slips. The hotel has a total of 32 rooms. They also have a new commercial 1,800 sq/ft kitchen, located where the old pool used to be. One of the new main attractions is the Jalan Jalan Sunset Bar where boaters can enjoy live music on weekends.

Their marina facilities include water, electricity, ice, gasoline/diesel, private showers, laundry, and many other accommodations for our visitors and members. Please visit often, for reservations call: 787-705-9197

Finally on the southwest corner lies a well-managed marina that even though it did not suffer damages during the 2017 hurricanes it is worth mentioning here.

Marina Pescaderia
José Méndez, owner and manager at Marina Pescaderia will always greet you with a smile and will go out of his way to help fellow boaters in any way he can. Please support his operations, and visit often! You can reach them at: 787-717-3638.

Marina Pescaderia is now an official US Port of Entry to the island of Puerto Rico, part of the CBP ROAM program. You don’t need to go to the Mayaguez office to fulfill your United States entry requirements.

Fair winds my friends! While sailing between the BVIs and Florida we have stayed in over 30 marinas, so if you need any additional information please contact me.

Capt. Tony Miro is a life-long sailor, photographer and web developer who currently lives in Florida with his family, where they sail often. He runs RUMadventures.com and tonymiro.com.

As the 2021 hurricane season approaches, Puerto del Rey is ready to provide an excellent service for vessels, whether it is located in land or sea