There are some men who become legends in their own time. Puerto Rico’s Capt. Mike Benitez is one of them. Over a career that’s spanned more than fifty years, Benetiz has put his mark on the sports fishing industry of not only Puerto Rico and the neighboring Virgin Islands, but also of the world.

“I was one of ten neighborhood kids who were offered a job as mate right out of high school,” says Benitez, about his entry into the career of sports fishing. “I had never been on a boat before. But, I didn’t have the best grades and no other job prospects at the time.”

The year was 1951 and the Puerto Rican government, specifically the tourism company, wanted to develop the sport of fishing to entice visitors. Therefore, they hired a number of captains from Florida. Benitez mated for a number of these captains, who included Tommy Gifford, a legend himself in the world of fishing, and Capt. Johnny Harms, who later made a name for himself by discovering the Virgin Islands’ North Drop while employed by Caneel Bay Resort owner, Laurence Rockefeller.

“All the captains I worked with taught me a lot. It was like being in college for sports fishing,” Benitez says.

The sport of fishing for blue marlin was in its infancy at this time. “Boats were wooden. The outriggers were made out of bamboo. The line was linen, not monofilament or Dacron. In fact, when we came in each day, we’d have to set the spools out so that the line could dry,” Benitez remembers.

He adds, “You have to remember that the world record for blue marlin at that time was only 724 pounds, and this was a record that had stood for 27 years.”

In addition to fishing Puerto Rican waters, Benitez was asked by Capt. Harms to fish as third mate at tournaments out of Cat Cay in the Bahamas. “That’s where I first saw a couple of Rybovichs. They cost $1,000 per foot at the time, real Cadillacs.”

Benitez eventually decided he wanted a boat of his own. He saved his money, and then worked nights over a three-year period to build a 36-foot Rybovich replica he named the Rebecca, in honor of his daughter. By launch time, Benitez had bought the charter business from Capt. Wills, hired two captains in addition to help him run the operation, and took over the government lease on the San Juan Bay Marina. Interestingly, in the mid-1950s, the cost of a half-day marlin fishing charter was $45.

It was in 1956 that Puerto Rico really landed on the map as a sports fishing Mecca. “That’s the year I caught the all-tackle world record blue marlin, a 756-pounder,” says Benitez. “I had my name in magazines and newspapers everywhere, including the New York Times.”

He adds, “I like big blue marlin. They’re powerful. Black marlin are sluggish and white marlin and sailfish are too small.”

From the 1950s and into the 1960s, thirty-five world records were set off Puerto Rican waters, including everything from marlin to yellow fin tuna, light tackle and heavy, men’s and women’s.

The 1960s and 1970s, says Benitez, were an era of sports fishing growth and expansion. “That’s when Chilo Bird started the San Juan International tournament, when Johnny Harms opened his new marina in St. Thomas, when the Boy Scout (USVI Open/Atlantic Blue Marlin Tournament) tournament started with just a handful of boats, and when the first tournament at Little Dix began.”

He adds, “I started fishing St. Thomas every summer from June 15 to October 15, bringing my clients over from Puerto Rico. We’d fish every day, solid all the time, hooking up 10 and 12 marlin a day while breaking lines and pulling hooks. Sometimes, we’d be the only boat out on the Drop. The Florida fishermen didn’t yet know about the Drop yet.”

In the 1970s, Benitez started to explore the world’s fishing grounds. “I fished in Australia in the late 1970s with Capt. Peter Wright and caught an 1162 pound black marlin.” Brazil, Venezuela, Panama and Hawaii, as well as Florida, North Carolina and Louisiana in the U.S. are among Benitez’s other locales for sports fishing worldwide as both a captain and an angler.

Today, Benitez still maintains his charter business with a hired captain. He also runs a bait and tackle store in the San Juan Bay Marina.

“I still fish the San Juan International every year as an angler. But, I’d rather be in the captain’s chair,” Benitez confides. “A good captain knows how to handle a boat and find fish. All the fancy electronics today help, but I still believe that if you see birds and find bait, that you’ll find the fish and that’s what its all about. After all, I’m part of the guy who’s winding. It takes the combination of a captain, angler and mate to catch a fish.” 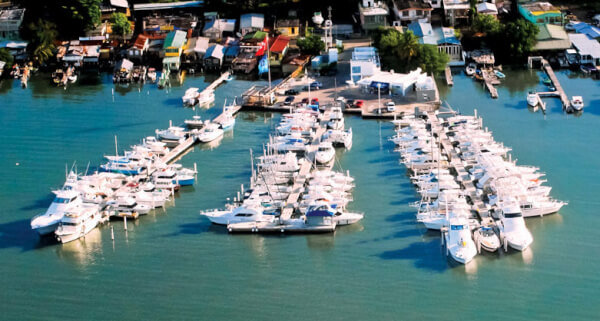