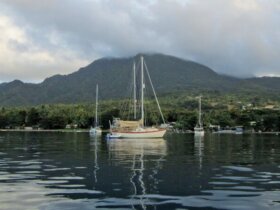 Dominica the Island of 365 Rivers

Synergy and Team WAVE won Cruising Class and Division and were 14th on corrected time overall out of a fleet of 265 boats that took part in the 100 th anniversary Newport-Bermuda race in June—an especially sweet victory because Synergy’s owner Lea de Haas is the first woman skipper to win ever, and we are the first all women team to be victorious.

In the inaugural race 100 years ago one tiny boat had a 20-year old newlywed woman, Thora Lund Robinson, aboard Gauntlet, joining her husband. It scandalized the blue blazers who nearly choked on their Dark and Stormys, and they immediately forbade women from racing in subsequent Newport-Bermudas. It took almost 50 years for the powers that be to ‘allow’ women to sail aboard a competing boat and another 50 years for the first woman skipper ever to win—and with an all women’s crew. Not bad for a bunch of girls doing their first Newport-Bermuda Race. We showed them what Caribbean sailors are made of.

After a monumental effort to get the boat from St Maarten to Newport, be measured and attend to the myriad details required for entry, we made it to the start line well prepared and rarin’ to go. We had a fantastic start in a fresh 14-knot south west breeze out of Newport sailing under our #2 jib. We changed up to our big #1 because of the dying breeze at the 3 AM watch change and the crew work went flawlessly.

We covered 200 miles in the first 24 hours, followed by a slow second day of just 134 miles. We sailed in a 5-knot dying breeze, with virtually a drift across the Gulf Stream, sometimes a total millpond with not a breath of air, letting the three-knot current carry us sideways at times. This race is a navigator’s tactical game of chess and chance. It takes a combination of skill and luck to get it right. We had studied the weather reports and Gulf Stream imagery before hand, so had compensated for the current by staying high of our course or west of our intended waypoint before reaching the stream.

As planned-thank god-the drift took us right to the waypoint we wanted to be at to catch the conveyor belt of the cold eddy that carried us at 9-yes-9 knots sustained over the ground in 4.5 knots of breeze and 4.5 knots of boat speed…awesome. The current was cranking and pushing us in the right direction which was a blessed relief after the drift through the stream. The atmosphere lightens immediately on board when someone shouts out 9.6, 9.7, 9.8, 9.9, 10…woohoo. Unbelievable speed over the ground. In the 20 years and average of five crossings a year of the stream that I have done, I have never seen those speeds. The gods were smiling on us big time.

Now the trick after sailing clear of the gulf stream was getting the shifts right and being in a good position so that the home stretch wasn’t too much of a beat. The third phase of the race was all tactics to get on the right side of the shifts so that we were with the first group in. We woke up to a mill pond the fourth morning out for our watch, and the watch we were relieving were totally exhausted from the effort of keeping Synergy moving in the zephyrs. This is my kind of weather. I am in my element and am glad that I developed the patience and came to love the challenge of light air sailing. We were keeping the boat moving.

Starboard Watch Captain Becky Paull, Sierra Lowell and Mary Stoof did a fantastic job. Port Watch Lea de Haas, Julie Swartz and Bronwyn Anderson were totally focused as well. I basically told them where to point the boat and they kept it moving. Not an easy task in reportedly the lightest air Newport-Bermuda Race to date.

Synergy’s owner, Lea de Haas was loving her boat, as were the rest of the crew. This boat has special meaning to a few of us, having seen it resurrected twice, once from neglect, and the second time from hurricane Lenny. I have sailed aboard her over the past 12 years and when she first arrived in the BVI our pre-start maneuvers consisted of nailing sheets of plywood to the deck so you didn’t fall through. Now she is once again ocean racing as she was designed to do in ’74.

We were smokin’ our Cruising Division fleet…now it was a nailbiting wait to be seen if the tail end Charlies on small, older, heavier boats got that big breeze that was supposed to be coming behind them to catch them up to us. They were stuck in the same parking lot we had been in. It was a lottery out there, and their breeze never filled in, much to our relief. We arrived at 0841 local time at one of my favorite islands. The first finisher, Nova was in on 20th at 1530 so we were about 17 hours behind the first boat in. Not bad out of a fleet of 265!

Synergy is just a beautiful ocean racing machine and the first night was truly magical. 65 boats in sight…it was a little city of lights, and we felt like kids trying to catch fireflies. The next day we could only see a few boats on the horizon. It is amazing how quickly everyone disperses over the great expanse of blue. Many converged again at the cold eddy waypoint, only to once again quickly disperse in the very light conditions, four-six knots. We converged once again in the home stretch. Less than 100 miles to go, and our competition pops up over the horizon like prairie dogs as we raced to the entrance to Bermuda.

The final night was one of total focus. Having so many nav lights coming at you, trying to figure out if you are going to cross ahead or duck in the dark was very interesting. Without radar, trying to judge distance is difficult. It is surreal to feel so alone out here and then to realize you are totally surrounded in all directions. Boats we crossed tacks with three days ago in the middle of nowhere were still crossing tacks with us at the finish. And getting to the finish line with big boats that are much faster, in Racing Division, was a thrill.

Synergy was built for ocean racing and she was kicking up her heels. She may be an old girl, but hey, so are some of us, ocean racing for the first time at 45. Lea the owner, at 58, is an awesome woman of great character and someone I aspire to be like. She stepped up to the plate, with partner Conrad Spaans, and hung in there through some very trying situations. Her enthusiasm was infectious, and we were all on a bit of a high. In the end all the blood, sweat and tears is worth it!

The icing on the cake was having Princess Anne choose us as the team she wanted to meet and view Synergy. We were invited to dock at Royal Bermuda Yacht Club and Team Wave was presented to the Princess and Governor of Bermuda. Lea had a conversation with the Princess about the crew, the boat and the race. A few of us were asked questions and it was smiles all around. Then we went to the Governor’s Mansion to receive our awards.

Lea collected her plaque for First in Class, and another plaque and beautiful half model of Finnistere, a three time winner of the race, for First in Division. I received the Navigators Award for top navigator in division. St Bart resident Randy West and his crew and Owner Elizabeth Baldwin aboard Van Ki Pass won first in Gibbs Hill Lighthouse Division. It was a thrilling moment for all of us, and the Caribbean contingent cheered loudly, while the Blue Blazers applauded graciously.

There is so much that goes on behind the scenes and without the help of many of our friends and fantastic sponsors who put in time, effort and money to get this show on the road, we wouldn’t have gotten this far. Nagico, BVI Yacht Charters, Budget Marine, Bobby’s Marina, HIHO, BVI Yacht Sales, ‘Loyal’ BVI West End Yacht Club, Conyers, Pearman and Dill, Kuralu Charters, TICO, Husky Salvage and Towing, Travel Consultants just to name a few. And a special thanks to Conrad Spaans who took time away from his business to help Lea in the big task of getting Synergy ready. We also want to thank Mitch Westcott and Maria Tscholl, without whose help in Newport we would not have made it. Annie Westcott did a fabulous job of designing, and keeping our website up to date, liasing with our sponsors, along with so many other details to keep Team WAVE on track.