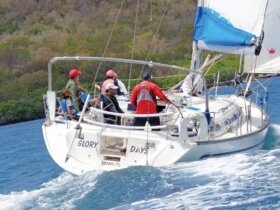 Fierce competition and fair-play were the hallmarks of Angostura’s Tobago Sail Week 2006. Although the sailors at Crown Point Beach Resort regatta compound were very friendly while on land, they became fiercely competitive when they hit the race course.

I was particularly impressed by self-imposed penalty circles – no one had to call “foul” to force a competitor to acknowledge touching a mark or make that crew complete a 360° penalty turn as soon as they were clear of other boats. Formal protests were reserved for more serious issues, and even those were at a minimum.

In Racing class, four boats – Crash Test Dummies, Bruggadung II, High Tension bMobile, and Storm – dominated the daily race results for the entire week. The remaining nine boats came close to the leaders, but could never knock them out of the top spots.

Wayward, Rapajam, and Petit Careme dominated the eight-boat Cruiser-Racer fleet, with Titan M making it to the top three on Monday only.

Pooglette II, of Charter class, took first on all four race days. Out of a total of nine entries, only Annie T, Sacajawea 4, and Saga Boy gave the leader a run for his money.

Of the two boats in Comfort Cruising class, only Black Pearl made the daily results list.

Great parties are a tradition at Angostura’s Tobago Sail Week. Sunday’s happy hour, held before, during, and after the Skipper’s Briefing, was well attended, with families reuniting and friends getting reacquainted. New people were welcomed, too, in keeping with the motto of “Friendliest Regatta in the World.”

Wednesday’s lay day party at No Man’s Land started around 2:00 p.m. – late enough for the revelers from the night before to get some sleep (and coffee) before starting to party again.

A nice surprise at No Man’s Land was the presence of Quentin’s Roti Stand. Some people brought their own snacks, but most lined up to buy a roti or steamed crabs with dumplings. A few tips about Quentin’s rotis: (1) DO NOT say “Yes” when he asks you if you want pepper sauce; (2) leave most of your roti in the bag, removing just a small portion at a time; (3) tear the paper away from the roti bit by bit, and eat your way down before you remove more paper.

Post-race excitement was high on Friday, with everyone looking forward to the awards banquet, prize-giving, and dancing. The regatta compound was beautifully set for the party under the stars, with a special tent for fine wine! Several serving stations were set up, thus avoiding the never-ending dinner line that plagues so many buffet-type dinners. Everyone seemed to enjoy themselves tremendously.

While racers took Wednesday, May 17 th, as their lay day, bartenders from Australia, France, Russia, Trinidad and Tobago, and the UK competed in the Angostura Aromatic Bitters and Drinks International Global Cocktail Challenge 2006, held in the ballroom of the Tobago Hilton.

All cocktails – alcoholic and non-alcoholic – were required to have Angostura Aromatic Bitters as an ingredient.

Winners of the Global Cocktail Challenge were announced at the awards ceremony held poolside under the stars at the Hilton Tobago. They are: Marco Nunez ( Australia) – Non-Alcoholic and Overall Winner, Milo Rodriguez (UK) – with Aperitif “Mother Rum”; Joseph Biolatto ( France) – with Long Drink “Vanilla Exhauster.” Stuart Hudson ( UK) – “1919 Flip” and Merlin Griffiths (UK) – “Bump and Grind” tied for first in the Classic division.

Mix all ingredients except the club soda. Pour into tall, ice-filled glass and top with club soda.

Combine and shake to mix. Pour over ice and garnish with freshly grated coconut and a slice of mango.

Place the sugar cube in the bottom of a champagne flute. Add two or three dashes of bitters and lemon twist. Fill slowly with champagne.