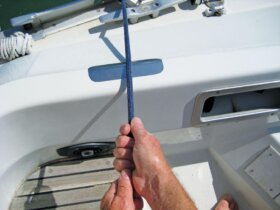 My wife Carolyn and I were recently asked “What’s the best part of cruising,” and we immediately responded in unison with different sides of the same coin. “The passages,” I said, while she replied, “the ports!”

I think this is common. Many cruising couples have a male ‘sailor who loves to travel’ combined with a female ‘traveler who loves to sail.’ (Not all, of course.)

Most of my personal cruising pay-off is within the ocean journey itself. I feel at peace, in harmony and filled with joy while at sea. Carolyn, on the other hand, enjoys the passages, true, but looks more forward to the destination.

When we share our adventures with others, Carolyn talks of the wonderful things which happened to us on terra firma while I fondly recall the magical moments within Mother Ocean’s bosom.

It’s true. After forty-five years of living aboard and ocean sailing I can honestly say that it just gets better. Why? Wasn’t it better before bareboats, GPS, DVDs, ATMs, cyberspace and jet-travel? Well, yes, in a way it was. But I, personally, wasn’t better. I was more judgmental then, I carried too many societal yardsticks. Now I realize I have none of the answers——so I can enjoy the questions more fully.

Everywhere I sail in the world somebody rows out to me as I’m dropping my hook and says, “You should have been here ten years ago!” What this person is really saying is, “I was, you weren’t… and so, I’m cool!”

That’s fine. That’s a part of human nature. But the important thing to remember is: these are the ‘good ole days’ right now. We’ll never have another moment as perfect as this one to live life fully… especially if it is upon the deck of a small vessel on a large ocean.

The word ‘travel’ comes from the French ‘travail’ or, ‘to work.’ Sailing offshore is a LOT of work in many ways. That why the ports are so sweet.

Yes, airplanes go to windward well. So what?

At the very core of the cruising lifestyle is the slowness of the passage. It’s languidness. It’s serendipity. It’s unknowable, unfathomable, hidden delights.

Anais Nin, one of my favorite word goddesses, once said, “When you travel you don’t see what is but who you are.”

To travel is to peel the onion of oneself——to discard your many unexamined prejudices.

Carolyn and I have had many wonderful times in ‘crappy, bad places’ merely because we don’t accept the external labels of others to cloud our reality.

Sure, India is crowded, dirty, noisy and a complete bureaucratic nightmare. But it is also one of the most mystical, enjoyable places in the world, especially glimpsed from the deck of a small boat.

The most magical port I have ever experienced was, natch, during the most magical period of my youth… in the late 1970s… while in my late twenties, with Carolyn, aboard Carlotta… in St. Barthelmey, West Indies.

It was, for a freedom-loving hedonistic sailor like myself, the Harbor of Eden. The very air intoxicated me. There were sailors from all around the world, a regular UN of yachting. Music was everywhere. Champagne flowed. Poets spouted. Painters brushed. Potters potted. Writers scribbled. Hey, was that Mikhail Baryshnikov? Raquel Welsh? Jimmy Buffett? Harrison Ford? Bob Dylan? Mick?

Did Philippe Poupon just tack into the harbor on Fleury Michon? Was that Mike Birch on Third Turtle? Bernard Moitessier, roaring drunk on Joshua?

…was that demented woman in the hooker outfit I’d given the hiccup-punctuated music appreciation lecture to last night at Le Select REALLY a classical pianist with the Berlin Philharmonic? (I am ashamed to report she was!)

…oh, what style St. Barts had! I decided (and still believe) that if I could ever have one-tenth the class of Marius Stackelborough or Loulou Magras or Fast Eddie of Gustavia… that I would be FAR cooler than Brando, Bogart and James Dean combined.

Carolyn and I stayed for almost a year without ever coming up for air. It was as if we’d always known, deep within our hearts, that life could be this good… a sensuous, artful, dance-crazed, intellectually-lit fairy tale… and yet were somehow shell-shocked to discover our core-belief was actually true.

Ah, but is this just the naivete of youth talking… a Caribbean coming-of-age fable?

Thirty years later Carolyn and I felt the same way about a completely different place: the lonely deserted isles of Chagos in the middle of the Indian Ocean.

There were no bars, no rock stars, no beautiful people… but everything I’d ever wanted in a group of 33 deserted islands… and less!

No people. No government. No… hassle!

I’d never experienced life under such Utopian conditions. Wouldn’t it be near-perfect?

Yes, is the answer. Yes, indeed! And, like St. Barts, we had to sternly force ourselves back to the unreality of accepted daily existence or ‘go native’ forever.

I love America too. I’ve been down the Mississippi River three times (Elizabeth, Corina, Panique) and would love to make the muddy, treacherous trip again. It is true that ‘people on the river are happy to give’ as the Creedence Clearwater Revival song (Proud Mary) says.

Traveling down America’s sewer pipe to New Orleans is a continuous delight. I don’t think anyone can gunkhole with King Al (Neptune of the Miss) for a couple of months without falling in love with the people of rural America: so unpretentious, so down-to-earth, so hardworking, so… true-blue.

Georgetown, South Carolina, was another special port for us. We’d just blown up our diesel, were broke and didn’t know a soul in the Deep South… and the entire town banded together (thank you, Ken & Robin and Tim & Katie!) to help us get back to sea again.

St. Augustine is our favorite stop in Florida. Somehow I briefly commanded their (St. Johns county) library system when their head librarian Louise Darby’s husband died… and, since I had no degree in library science, had to bill myself as an ‘info-manic’ instead! (See, you can NEVER anticipate the best, weirdest parts of cruising!)

The finest place I ever lived under the American flag was St. John, USVI, Caribbean Sea, Earth. It was the first island I ever lived where the word ‘brotherhood’ was never spoken but practiced everyday in every way.

I was then, and still am, enraptured with the entire Caribbean Sea. Bob Marley still reigns here. I’ve explored its nooks and crannies for over three decades now——and still haven’t scratched the surface.

We must go back to the San Blas. The Kuna Indians have much to teach me about living in harmony with nature.

Every place we stopped in the Tuamotus ( French Polynesia) was a wonderful mystery to be unlocked. Palmerston island in the Cooks has to be the most welcoming rock on the planet. We love Indonesia. Bali is a Hindu dream. Thailand is still the Land of Smiles. We can’t wait for the thugs to be tossed out of charming, long-suffering Burma. Does time really stand still in the Maldives? It seemed to. Madagascar has been slowly moving away from the rest of the world for 100 million years of continental drift… the most unique chunk of dirt on the planet.

Africa is… home. For us. Mankind, I mean. What an odd feeling to come over a hill, see a plain full of wild animals grazing to the horizon… and think, “I’m home. This is where… …where my people began.”

St Helena is so lonely in the middle of the wind-swept South Atlantic that the family (okay, it is a big family but obviously one-blood) that lives there makes a special effort to welcome its hearty sailors… and has since Slocum.

Yes, there are hundreds of harbors on this watery planet of which I can say, depending on mood, are the ‘best place’ I’ve ever sailed into.

Which ocean do I like best? Certainly the two great trade wind passages are the Capetown and Brazil run up the middle of the South Atlantic and the Panama Canal to Torres Straits ‘coconut mile run’ across the wide Pacific. Given the right time of year, sailing conditions will be near-perfect the whole way.

Yes, the North Atlantic does has its own circular charm of Bermuda, Azores, Gibralter, Canaries, Caribbean and the good ole US of A.

But my favorite ocean is the southern half of the Indian. I like its big swells, high winds and majestic seas. It is totally untamed, uncivilized, uncaring——and, thus, it is seldom visited. Almost deserted. “…seriously empty,” as one storm-tossed sailor joked to me. And there is almost no place to stop, but the tiny specks which exist are beyond compare: Christmas, Cocos Keeling, Rodriquez and Reunion.

The biggest problem I have as an eternal sea gypsy is deciding where to sail next. There’s an embarrassment of riches. It isn’t easy to make a mistake. And, if I do, I just tack away. What could be better?

But my perfect harbor, via my favorite ocean, will not be yours——nor should it be. I am not advising you to follow my route, only my example. The future awaits. The whole world is, if you just allow it to be, your oyster IF you are a sailor. You’ve been thinking about it your whole life, haven’t you? Why not make today the ‘someday’ you’ve always dreamed off? Why not allow the glorious future to be now?