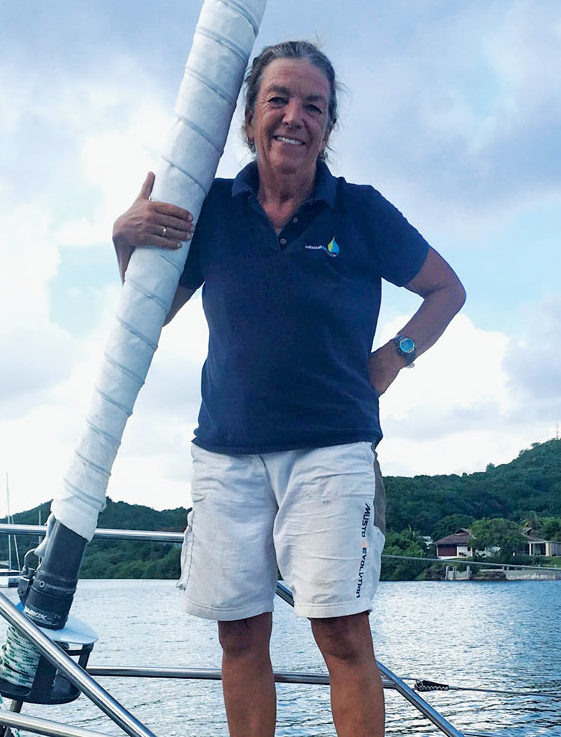 She’s sat at the helm nearly all her life. In fact, Pippa Turton’s earliest recollection of sailing was as a child at the tiller of an Enterprise, a 13-foot, two-man, sloop-rigged dinghy. Turton navigated this craft on the waters off Portsmouth Dockyard in the UK adjacent to where her father, the motivation behind her learning to sail, was stationed in the Navy. Today, millions of sea miles later, Turton is the chief instructor at Miramar Sailing, an RYA training center located in Jolly Harbour, Antigua. Offshore, she’s often found sitting in the corner of the school’s Grand Soleil 463, Phoenix, giving advice to help students gain the experience they need to run a boat safely, including navigation and sail handling. The story of how Turton traveled from Portsmouth to Antigua is interesting and instructive for young women who would like to follow in her wake.

“I was in my teens when my father retired, and we moved to the sailing village of Newton Ferrers in South Devon. By my early 20s, I was working as crew for the Island Cruising Club. It was coming to the end of the UK sailing season and my dad had visions of having to support me through the winter months. By then dad was a yacht broker. He had sold a 30-footer to a client who needed one more crew to help sail the boat to the Caribbean. Guess who he volunteered! I arrived in Antigua, soon found work on various charter yachts out of English Harbour and loved every minute of it.”

Turton’s two longest passages are the transatlantic that brought her from the UK to Antigua and a voyage from Perth, Australia to Cape Town, South Africa as a mate on a 70-foot Youth Sail Training vessel with the Ocean Youth Club. Before that, she mainly sailed off the UK’s Devon and Cornwall coasts. Turton particularly remembers a trip from Scotland to Poole during a Solar Eclipse, in which she vividly recalls the line of camera flashes along the coastline as people took photos of the eclipse passing overhead. Since then, over the last eight years, she has cruised the Windward and Leeward Islands extensively, even beating a path out to Barbados a few times. 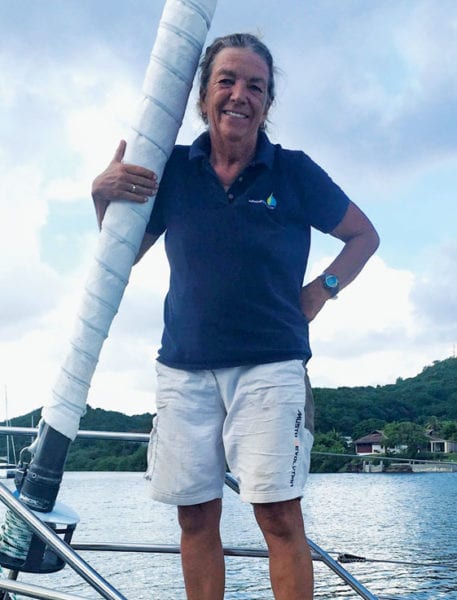 “I joined Brian at Miramar Sailing in 2006. We got together when he was looking for someone to help run his newly formed charter business. We both decided that we should have our RYA Offshore Yachtmaster qualifications to take the commercial responsibility necessary for taking paying passengers sailing. Thus, I achieved Yachtmaster in 2007,” says Turton, who also teaches diesel engine maintenance, VHF radio, radar and power boat courses.

Turton says what she loves best is sharing her passion for sailing and seeing novices “get the bug.” She says many of Miramar’s former students are now working in the marine industry. Turton and Brian, who married in 2010, are also directors of the National Sailing Academy of Antigua & Barbuda. This is an organization dedicated to promoting youth sailing on the island, something near and dear to both of their hearts. Turton doesn’t see herself as a racing sailor, as her goal regardless is to always get the boat sailing efficiently. However, she would one day like to complete the RORC Caribbean 600 as skipper aboard Phoenix with an all-female crew.

What does Turton see as opportunities and challenges for women captains in the Caribbean?

“There are many different types of yachts – charter yachts, racing yachts, super yachts, classic yachts – and the Caribbean sees most of them,” she says. “For women to make the grade, they frequently have to prove themselves as worthy sailors before they are accepted as potential captains by the industry. All skippers need to work from the deck crew position upwards to gain the respect of their peers, which they will need to do to succeed. Often, women still have to go ‘the extra mile’ to prove themselves. However, the ones who do well are generally well respected by their crews and other sailors who recognize their talents.”