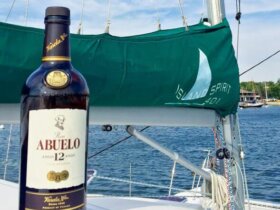 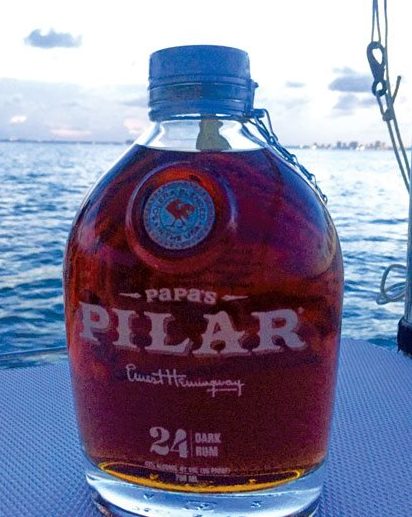 Our favorite tour in Key West, by far, was the Hemingway Home on Whitehead Street.  Ernest Hemingway, known by many as “Papa,” had a penchant for adventure and fine rums. The Hemingway Rum Company pays homage to this icon of American literature by offering a Blonde and a Dark rum under the name of Papa’s Pilar, named after Hemingway’s fishing boat.  Naturally we chose the dark rum hoping for an adventurous sipping experience.

Papa’s Pilar is a blend of both pot and column distilled rums from the Caribbean, Central America and Florida. The dark rum is aged, solera style, in bourbon barrels and port wine casks, then finished in sherry casks. The number 24 on the front of the bottle indicates the oldest rum in the chain of barrels is 24 years of age. Papa’s Pilar is sanctioned by the Hemingway estate with the family donating 100 percent of their royalties to organizations that embody adventure, literacy and conservation.

In May 2017, Hemingway Rum Company opened its Rum Distillery & Experience Center on Simonton Street in Key West. The 8,000 sq. ft. all brick ex-tobacco warehouse now supports Papa’s Pilar rum production along with providing an Experience Center, a Trading Post, a Tasting Room and eventually a rentable event center.  Visitors can watch the rum go through the distillation process followed, of course, by samples.

He Said
The rum has a sweet nose of vanilla, molasses, honey, with a hint of oak. There’s a slight alcohol burn in the sinuses which the sweetness quickly overtakes. On the palate, the only sweetness I get is honey, but now there is a spice coming through that dissipates so quickly I can’t immediately distinguish. Second and third sips brings out anise, vanilla, and a subtle hint of oak.  It’s very smooth from start to finish with a nice warmth on the throat. After the initial nose, I expected a very sweet liquid however, the spices and oak balance the rum out nicely making Papa’s Pilar a great sipping rum.

She Said
I love the canteen design bottle highlighting the rum’s reddish brown with golden hues. The smell reminds me of my grandfather who drank port wine. There are raisins, cherries, and some honey on the nose. A burst of cinnamon immediately hits the tip of the tongue but once the liquid engulfs the palate the spice is replaced with the raisins and cherries. The finish is warm and inviting.  With additional sips, the cinnamon is less pronounced which I had hoped would expose more flavors.  It doesn’t.  This is a rum for a cool fall or winter night.

Overall
Papa could have sipped Papa’s Pilar Dark while sitting in his veranda on a rainy evening in Key West, listening to the tree frogs as a gentle shower chilled the air. This rum is very inviting.