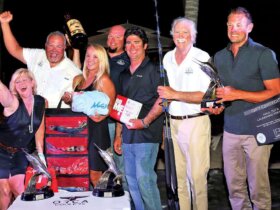 On Wednesday, December 30, the Dominican Republic's Casa de Campo Yacht Club celebrated its Commodore's Cup Challenge. "It has been another perfect time to celebrate the VI CCYC Commodore's cup 2009," reported club Secretary Rafid Ynirio. "Casa de Campo Yacht Club, host of this classic winter event, has received many of its associates, friends and family to participate in this exciting regatta. Seven teams competed this year completing two rounds of regattas with the final one which decided this year's winners."

Gianfranco Fini, the club's Commodore, Franco Pistone, Sport Director, and Rafid Ynirio awarded prizes to the winners after a hard day of racing with excellent winds at the facilities of the Casa de Campo Yacht Club. For more info about the club: [email protected] or www.casadecampoyachtclub.com.

Canfield, and the Stars+Stripes America’s Cup team he founded with Mike Buckley a few years back, will join the New York Yacht Club’s campaign for the 37th America’s Cup