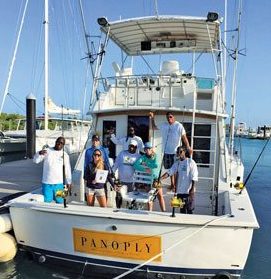 The third day proved the lucky charm for the team aboard Panoply. Anglers on this 46ft Bertram sport fisherman were the first to release two blue marlin, which earned them Top Boat in the twenty-second Caicos Classic IGFA Release Tournament, fished out of IGY’s Blue Haven Marina, in Providenciales, Turks & Caicos, June 29th to July 3rd. Panoply, one of eight boats competing, wasn’t the only team to catch a pair of blues. This made for fantastic excitement right down to the final lines out.

“We hooked our first fish early on the first day, but were unlucky with a spat hook. Then, we saw two more blues, but failed to catch them and therefore finished the first day with no releases,” explains Delphine Hartshorn, owner and manager of TCI-based Panoply Sport Fishing & Luxury Charters.

Meanwhile, the Catchin’ Caicos, with Captain Sherlock Walkin, was the first boat to hook-up for the tournament, followed by Spellbound, helmed by Captain Toby Weiner. The third, and final hook-up on the first day was actually a double-header by the After 5, captained by tournament director Art Pickering, of which lady angler Trisha Pearson was able to catch and release one blue.

Slow fishing for the entire fleet on day two kept Panoply from getting on the scoreboard yet again. This changed on the third and final day when one of Panoply’s anglers released a small blue before 9:30am. The team’s second fish came in the afternoon. It was definitely a scramble to see who would release their fish first as fellow competitor, After 5, was also fighting their second fish at the time. In the end, it was Panoply that released its blue first and this gave the team its very exciting win. Only 20 minutes separated the Top Boat, Panoply, and runner up, After 5.

“This is our first time winning the tournament, although we have placed in the top three previously,” says Hartshorn. “There wasn’t any secret to our success. It was the combination of good teamwork and a little bit of luck.”

The Top Boat prize also earned Panoply entry to represent the Turks & Caicos in the Offshore World Championship, which will be held in Costa Rica, in 2018.

Pearson, on After 5, took home the Top Lady Angler prize. This is a repeat of a feat Pearson also achieved in 2012.

‘It was really exciting this year to see lots of blues, get a big one on and win Top Lady Angler again,” explains Pearson, who commented that she went fishless in three tournaments since her win five years ago. “It took me over an hour to reel it in, and in the Caicos Classic, no one can help the angler. It was interesting being the only woman on the boat, as the men cannot offer any help other than encouragement. You must reel that fish in by yourself!  Five years ago, if someone had told me that I would be fishing for marlin and loving it, I would have laughed. But it’s true. The trolling is so peaceful and then there’s the excitement when you get a fish on. I’m hooked.”

There were quite a few billfish raised this year, many of which resulted in pulled hooks so they didn’t count in scoring. However, the multiple bites made the tournament a great success, according to Pickering.

“The billfish activity in the Provo waters was very exciting with the big fish being predominant and much increased activity. This is encouraging as we start to plan next year’s tournament,” he says.