At Odds with Dos Maderas PX 5+5 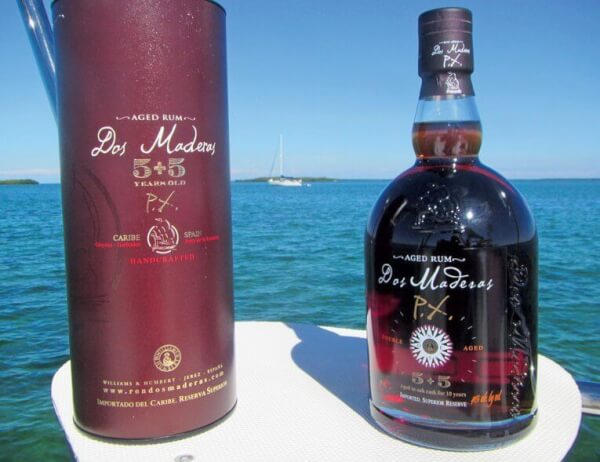 Our son and daughter-in-law surprised us with a rum of the month subscription from Tasterâ€™s Club, a subscription based company featuring whiskey, tequila and rum. Tasterâ€™s Club carefully selects â€œmust haveâ€ rums from around the world and surprises its members each month with an exciting new rum to ponder and enjoy. Each bottle is accompanied by a â€˜Rum 101â€™ course which guides the member through the rumâ€™s production techniques, trends and history. First to arrive was Dos Maderas PX 5+5, arriving in a beautiful protective box reminiscent of a fine single malt.

Dos Maderas PX 5+5 is produced using a triple aging process. It begins with rums made in Barbados and Guyana. After aging for five years in the Caribbean the rum is shipped to Bodegas Williams & Humbert in Jerez, Spain. The Bodega complex is the largest winery in Europe, housing more than 65,000 casks and bottling nine million bottles a year. Once the rum arrives, master distiller Paola Medinas continues the aging process using the solera method. For the next three years the rum is aged in 20-year-old Don Cortados Palo Sherry barrels followed by an additional two years in 20-year-old Don Guido Pedro Ximenez Sherry barrels.

He Said
A really nice nose of deeper mellow fruits with cherry standing out. There is a hint of vanilla and a slight charred oak note. The rum laces the glass as a fine rum should. On the tongue the rum is mellow with not one note overpowering another. Iâ€™m getting apple, slight raisins and molasses. The sherry is subtle on the palate and lingers on the finish. Each sip presents the same combination. Iâ€™m quite enjoying this.

She Said
My nose reminds me of the port wine my grandfather drank. I keep looking for rum notes but honest to goodness I canâ€™t find them. Unlike Clint I do get an alcohol heat on the tongue but it is quickly coated by the viscosity of the sherry. Like the nose I keep sipping looking for the rum notes of caramels, vanillas, or molasses. Iâ€™m getting none. The finish actually presents some cherry and maybe a hint of orange but apple and vanilla? I think thatâ€™s Clintâ€™s subtle hint he wants an apple pie.

Overall
We are definitely in opposition here. While Clint is enjoying his dram while listening to some Eric Clapton, Terry is left thinking, â€œWhat the heck was that; a rum or a fine sherry.â€ This rum is definitely different from your typical Caribbean rum but different isnâ€™t always bad.

About Clint and Terry: We have sampled many a dram over our 32 years of marriage and quite often we donâ€™t fully agree. Could be the difference is male/female taste buds. Or, somebody is just wrong.