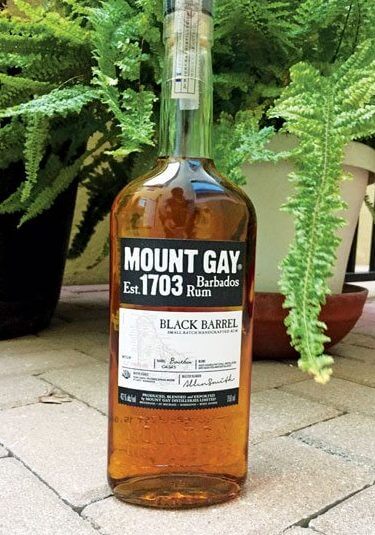 For over 30 years Mount Gay has sponsored sailing regattas around the world. Sailors proudly wear their Mount Gay Red Caps as symbols of participating in one of 150 hosted regattas each year. As the day of racing ends, the rum flows in the hospitality tents featuring cocktails made with Mount Gay Silver and Eclipse. Discerning sailors know that the distillery also has three sipping rums to help them contemplate the day’s racing. Black Barrel is the company’s small batch, handcrafted rum that needs neither mint nor fruit juice added for full enjoyment.

At over 300 years old, Mount Gay is the oldest rum brand in existence. The rums begin with molasses mixed with water which is boiled, to sterilize prior to fermentation. A special yeast culture is then introduced into the molasses wash and monitored for 72 hours. Once fermentation happens the “wine” of six to seven percent alcohol by volume is distilled in either a pot still like the one replaced in 1760 or a two-column continuous still similar to the Coffey still of 1832.

Master Blender, Allen Smith, blends the rum from these two stills to create Black Barrel. The blend is then placed in deeply charred bourbon oak barrels to mature a second time. Black Barrel is often compared to similarly priced bourbons. Since we love bourbons we can’t wait to try.

There is a very subtle charred oak note with hints of vanilla and cherry blossom on the nose. The cherry bursts on the palate with hints of charred oak as it lingered in the finish. Upon the second sip, cinnamon becomes more noticeable and begins to take over the cherry but to my delight the oak finish remains. Once the cinnamon takes over I lose the cherry and vanilla altogether. What I do like about this rum is the oak finish. That stays consistent with each sip.

I love the honey color and the lacing it leaves on the glass. The cherry vanilla nose is not overly sweet. Immediately on the tongue is a burst of cinnamon which engulfs my palate leaving me unable to decipher another note. The liquid is hardy and smooth which coats and warms the throat. I keep going back for more out of curiosity and because the rum is so soothing. I’m really enjoying this one note wonder. It reminds me of a good bourbon for its texture and spice.

Black Barrel is a good sipping rum for the price point. Adding an ice cube mellows this rum out very nicely. So, for a rum to warm you on a brisk fall night, take it neat, but for a nice sipping experience after a summer sail, add that ice cube. You will go back for more.