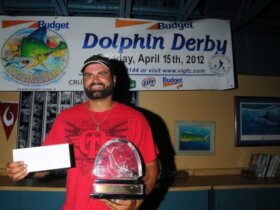 Interest in match racing is rising in Puerto Rico. Hot on the heels of the USVI’s Peter Holmberg leading a match racing clinic for competitors in July 2011, and Puerto Rican sailors such as Jorge Santiago testing the waters by competing in the Carlos Aguilar Match Race last December, the USVI’s Bill Canfield taught a two-day clinic held September 22nd and 23rd at the Ponce Yacht & Fishing Club for both competitors and those interested in learning race committee work.

“Match racing is great for tactics, rules and boat handling,” Canfield explains. “It makes you a better sailor and it’s a great sport. I’m always interested in pushing match racing as an alternate to fleet racing and help anywhere I can.”

Twelve sailors interested in becoming match racing race committee officials and 30 competitors attended the clinic. The instruction was organized into classes held separately for both groups in the morning on the first day, followed by practice and a debriefing session in the afternoon, with a full dress rehearsal for a match race on the second day. Both the drills and practice regatta were held in Ponce Bay, right in front of the spectator-friendly yacht club fuel dock.

For the competitors, Efrain ‘Fraito’ Lugo and Jorge Santiago organized the lectures.

“I’ve been participating as a competitor in these clinics and am very enthusiastic about the idea of match racing,” says Lugo. “The power to keep control of situations in all aspects of the race is something that makes you stronger as a sailor. I think what we are working on here at the Ponce Yacht Club is the future of sailing.”

“I wanted to learn more and be part of this new sailing modality and was assigned as race officer on the race committee boat,” explains Ramos. “What I learned most was the knowledge that judges must have and the quickness required in making a decision.”

Pastrana, who serves as a race officer and principal race officer at fleet racing events in both Puerto Rico and Miami, says, “I love it. Match racing is more challenging for race officers, there’s more action and more fun. The races are short, fast and in protected waters near the shore with more exposure for the sailing sport.”

The clinic was extremely helpful and mesmerizing for all race committee personnel present, says Luis Matos. “I would love to do more match racing events and play a role either as an umpire or as a competitor.”

Practice match racing is now in the organizational stage at both the Ponce Yacht & Fishing Club and Club Nautico de San Juan, says clinic organizer, David Kerr. “My goal is to set a Match Racing Circuit with St Thomas, Tortola and Puerto Rico; something like the old CORT (Caribbean Ocean Racing Triangle) series. I think that it will take some juggling around, but it can be done. Just like Kevin Costner says in the movie Field of Dreams, ‘if you build it, they will come.’”