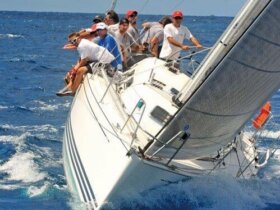 The Build Your Future Project, a joint initiative of the St. Maarten Marine Trades Association (SMMTA) and the St. Maarten Sailing School, focuses on the building of a vessel known as a Skerry by high school students.

The Skerry is a 15-foot Norwegian-style boat that weighs only 90lb and arrives in kit form, a bit like a jigsaw puzzle. Between five and 25 students per school will build the boats under the guidance of a teacher dedicated to the project and a qualified mentor with knowledge of the marine industry and marine carpentry.  The project is under the direction of Garth Steyn, SMMTA Youth Sailing Director and head of the St. Maarten Sailing School.

In a press release, the SMMTA said they have had an overwhelming response from the high schools wanting to get involved in the scheme and that the Caribbean International Academy (CIA), St. Dominic, Milton Peters College (MPC), St Maarten Academy (Vocational) and the Secondary Vocational Education SBO school had already signed on.

“The goal is to have all five vessels completed in time to have a first competition as part of the events leading up to the Heineken Regatta. In conjunction with the Regatta Organizers, an artwork competition will be held and the winners will get to decorate a sail,” the SMMTA said.

Working with mentors Rein Korteknie and Garth Steyn, The SBO students started building a boat in a shed belonging to the water sports company Aqua Mania in late October. The first test boat, named Aqua Maniac, was started by an earlier class of SBO students.

The Build your Future boats are being kept in storage ready to be given out to the schools. Each of the five schools building a boat will have a ‘mentor’ to help them. This is a person who has built boats before and is familiar with boats and sailing. They will guide and help the schools to make sure everything is in place and the boat is safe and properly built.

One mentor is well-known Caribbean catamaran builder Dougie Brooks. He will be working with the CIA while they build their boat at the school’s Marine Club.

Mentor Frank Boekhout used to be a teacher at MPC, and he will help the students at St Dominic build their boat at the school.
Participating students from MPC are building their Skerry in December in place of going out of school on an internship.

It is hoped the Build Your Future program will encourage local youngsters to seek employment in the marine industry and early results are encouraging.

The SMMTA said that as of October they had gained the following sponsors and wished to thank: Aqua Mania, Island Water World, Budget Marine, FKG Marine Rigging and Fabrication, St. Maarten Sails and Canvas, the Harbor Group of Companies and Safe Cargo Services.

For more information or to support the Build Your Future scheme, email: [email protected]

8 Great Places to Horseback Ride in the Caribbean

Horseback riding along a tropical beach seems like a scene straight out of a movie. Yet, you can turn this dream into a reality in the Caribbean