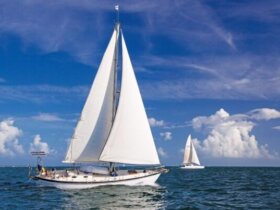 Want to Have a Good Time in the Bahamas?

So this sailor walks into a bar, plunks down his money, and says, “One Bequia Blast.”

Makes sense to the sailor (me). The bar sports a whale’s jawbone for an entrance arch and stools made from whale vertebrae. And it reclines beside the harbour at Port Elizabeth on Bequia in St. Vincent and the Grenadines.

But it also makes sense that the proprietor, a pleasant middle-aged woman, looks at me askance and shakes her head. “Don’t know it.”

Now I remember: the Bequia Blast is a rite of passage, not a drink. But it could be.

That morning – back at the Sunsail base during our chart briefing – the lead skipper talked about sea conditions in the Grenadines.

“Moderate swells,” he’d said. Then he paused. “But watch for the Bequia Blast.”

The waters between St. Vincent and Bequia are open to the sea. Next landfall east is Africa.

We come out of Blue Lagoon through a narrow passage with depth showing zero point one and we’re in it.

Winds are steady at 20, gusting to 28 true.  And we were still not in open water.

Tidal race here is contrary to prevailing winds so we raise the main in the nautical equivalent of a washing machine’s spin cycle.

And we haven’t yet encountered the Bequia Blast – an onslaught of gusts that barrel down the bluffs of Bequia Head like a runaway rollercoaster.

Now ten-foot beam waves smash into us, many of them breaking on the hull of My Tkatche – a boat with a name that sounds like a Russian sneeze. One crew member suddenly succumbs to mal de mer.

But somehow I finally find myself having fun. Reefed-main, half the foresail furled and seven knots steady. And Bequia beckons like a buxom Bali Ha’i.

We clear Bequia Head, make our way down on a beam reach to Admiralty Bay, and we find flat water and a mooring ball with our name on it.

The rhumb line from Blue Lagoon to Port Elizabeth is only eight miles but it could be a thousand in purely subjective distance.

But now we have made our first night’s anchorage. We dinghy ashore to a charming village with seaside restaurants, gift shops and galleries shaded by fire-engine red Poincianas and a gorgeous stone walkway fronting a harbour where mega yachts share mooring fields with other charterers. The charterers are committed to velocity made good, the cruisers to life made good.

For the next few days we’d try to strike a balance between the two.

We will miss Mustique. Mick Jagger will have to find other company. We won’t miss Canouan, a place Doyle describes as an island of “bumpy hills, spectacular views and exquisite water colors.” We will miss Mayreau, though my friend Dave’s pupils dilate and his voice changes to that of a love-struck romantic whenever he mentions Salt Whistle Bay.

I’ve opted instead for the embrace of a verdant and voluptuous archipelago called Tobago Cays.

Nearby Petit Tabac was the location for the ‘Pirates of the Caribbean’ scene where Johnny Depp and Keira Knightley were marooned. But I don’t believe it. I can see it from here.

I’ve just dinghied back from Horseshoe Reef with its incredible snorkelling and I’ve swum with turtles off Baradel Island. And now I’m gazing across aquamarine waters toward Petit Tabac, sipping a Hairoun beer. They must have the island wrong. Who would ever leave such a paradise on purpose?

And amid such philosophical musings I have a flashback to day one of this voyage and a bar on Bequia called
the Whaleboner.

Here I reflect upon the fleet of boats silhouetted by the dying sun.

On my way to shore I’d stopped beside a boat sporting a Canadian flag and a middle-aged crew. “Been here a week,” said the skipper. “Might stay another.”

My friend Judy paid for a seasonal mooring ball here—and from here chased the winds on their terms.

But I also remember a charterer who was making for Grenada from St. Vincent – trying to do it in one marathon passage.

And I wax philosophical. I feel like I had been blooded here today – that I girded for battle with these waters and islands and they won.
Or not.

We weren’t finished yet. We would strengthen our sea legs. We would achieve the anchorages we were meant to achieve. And we could always come back. Next time we’d add Mayreau, next time a post-card anchorage in the lee of Petit St. Vincent.

But for now it’s the rhythm of those cruisers I seek. Velocity made good is less important than life made good.

Now the proprietors return and together we construct a libation worthy of this adventure.

And there in a bar on the shore of Bequia, we raise our glasses together.

“To the home of the Bequia Blast,” she says.

Mark Stevens is an award-winning travel writer whose specialties include Canada, the Caribbean and boating.  Credits range from Sailing magazine and Canadian Yachting to the Washington Post.

Mark_Stevens
View More Posts
Mark Stevens is an award-winning travel writer whose specialties include Canada, the Caribbean and boating. Credits range from Sailing magazine and Canadian Yachting to the Washington Post.