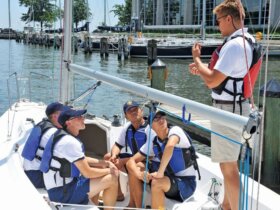 The Miss GEICO Offshore Race Team has been amazing race fans for ten years, winning over one hundred races and eight World Championships. I was invited to their headquarters in Riviera Beach, Florida to learn more about the team as they prepared for the first test session of the season. Throughout the day, Managing Member and Partner Scott Colton’s constant reference to NASCAR was not lost on this race fan. Speed, wins, and championships are always the goal leading into any season. But as in NASCAR, the Race Team’s dedication to their teammates, their loyal fans and the communities they visit makes all the hard work worth it.

The team was founded by John Haggin, who caught the offshore racing bug at the age of six. In 2004 Haggin formed his own team, AMF Racing (America Moving Forward), with a mission to integrate turbine engines into offshore racing. The 42-foot Miss GEICO Platinum Catamaran made its debut in 2005 with throttleman Scott Begovich and driver Marc Granet. It didn’t take long for them to gel as a team. In 2006 the team won their first of five back to back World Championships.

Colton explained the pair of Begovich and Granet couldn’t be more opposite. “Scotty is a former football player who fills up the cockpit with his size yet has a very laid back personality. Marc on the other hand is very Type A and spindly,” Colton joked. With top speeds nearing 200 m.p.h., Begovich’s calm demeanor is certainly an advantage when he’s operating the throttles. The throttleman controls the boat’s speed and trim on the water while the driver keeps the boat on course. Conditions change dramatically throughout the race with wind, waves, and other competitor all playing a role.

Safety is the team’s top concern. Their safety boat is always close by with frogman David DiPrellio standing by to retrieve the drivers. The team has never flipped the boat, however during a practice run in 2012, the boat did suffer a catastrophic fire after a $10 part failed. Fortunately safety crews were immediately on the scene and no one was injured.

As in NASCAR the crew chief of the team is truly the brains of the operation. Gary Stray joined the team in 2009, after seven years with the Victory Team in Dubai then running his own rigging company in the United States. I watched Gary throughout the day seemingly unfazed by any delay or mechanical problem presented. DiPrellio could not stop singing Gary’s praises throughout the test session saying, “Gary has more common sense than 99 percent of the world.” Others simply say Gary is a genius. I was most impressed by the calmness of the entire team as they worked through problems. This teamwork is what wins championships.

After Haggin retired in 2011, Colton, Begovich, Granet, Stray and Gary Goodell became equal partners of AMF Riviera Beach, LLC. Colton said their goal is simple, “To win as many world titles as possible.” With each partner bringing his own strength to the table this goal has allowed them to grow the Miss GEICO brand even further.

The 2015 season features 12 races with just over half in Florida. Race weekends are hectic between practice sessions and races. But no matter how busy they are, the team always makes time for its fans. Colton emphatically states, “As long as you have a GEICO on your shirts you need to go the extra mile for the fans. We are one of the few teams which have an open pit. It’s important that our fans feel included in the weekend.”

The team also participates in local charity events and visits schools and hospitals. During the Atlantic City Veterans Offshore Grand Prix Father’s Day weekend, the team gave rides to veterans injured in service as part of the Wounded Warriors Project. Colton says “We consider it a privilege to race the world’s fastest catamaran on behalf of GEICO, and an honor to support members of the military and their families who come out to see us race on Father’s Day.”

Taking their service to the community one step further, in 2007 the team established United We Race, a 501 (c)(3) charitable foundation for the sole purpose of raising funds for veterans and veterans’ programs. Today, 100 percent of all race prize earnings and merchandise sales benefit these types of organizations. Over the years Miss GEICO team has raised tens of thousands of dollars to provide assistance for those who defend our freedom.

On top of all this Miss GEICO participates in 20 National Boat Shows, 3 National Air Shows competing against the GEICO Skytypers, 4 National Poker Runs in the GEICO Caveman boat, and a variety of other charitable events throughout the year. I asked Colton what it takes to pull this all together. He simply said, “Teamwork!”

WHERE TO SEE MISS GEICO: