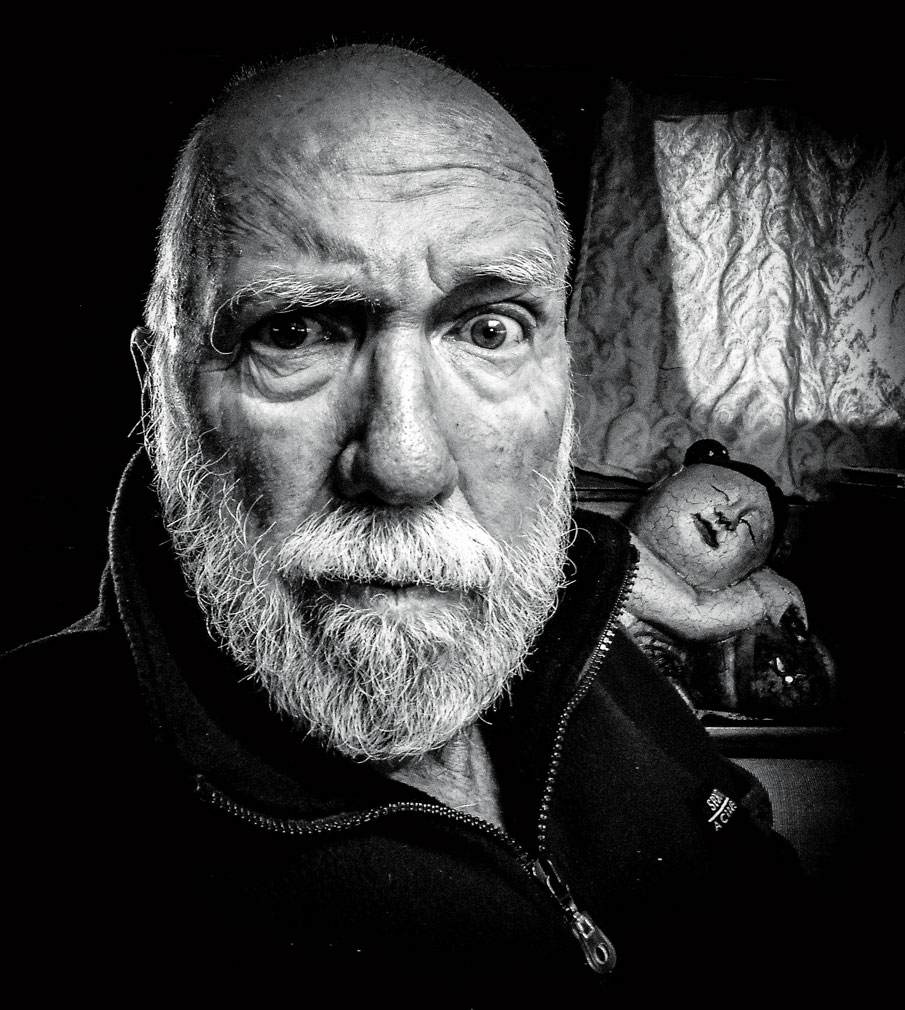 Yesterday I woke up and realized sailboats are stupid. I mean, most people have moved on. Truly. Let’s put it another way: if Chris Columbus were alive today he would NOT be exploring the New World on the Pinta, Nina and Santa Maria. He’d be lounging around the Jacuzzi aboard an Italian mega-yacht, hyper-yacht, giga-yacht or VLP-yacht (Very Large Penis)!

…where were we? Ah, yes! The Ultimate Stupidity of All Sailing Craft. It is true. Only the truly ‘slow’ still use wind as a method of watery transportation.

The sad fact is that I’ve been in denial of these obvious, blatant and extremely well known nautical facts… for at least the last 45 years of ‘blow boat’ living-aboard and 100,000 miles of ocean sailing. But I’m starting to wise up. Finally.

Here’s how it happened. My wife and I were in Great Cruz Bay, St. John, and were invited to a Coral Bay raft up. So we powered Wild Card, our 38-foot S&S-designed sloop, nine-tenths of the way there, and then, just before we came into view of the raft-up, shut off our diesel engine, hoisted our sails and came screaming into the harbor with a bone-in-our-teeth!

“How was it on the Southside,” my sailor friends asked as I tossed them my lines.

“Not bad,” I lied. “There were some nice lifts off Reef Bay and we tacked over when we got headed at Salt Pond… any way, a single-reef and my trusty number three worked well in the eighteen knots apparent…”

It was at the precise moment it dawned on me I was being a hypocrite. Totally. This hurt. After all, I’m a child of the 1960s and, thus, have ganja-vowed to always ‘tell it like it is’ regardless of public opinion.

Now I found myself a ‘closet stink-potter’ without the courage to admit the truth.

So I took a long, hard, objective look at The Wonderful Wacky World of Sailboats and concluded the following: they are about the most uncomfortable devices ever invented.

First off, they heel. And not just one way, both! Example: we were on starboard tack for about a year while transiting the Pacific. Everything just sort of organically ‘mulched’ over to the loo’ard (low) side—-all our loose rhum casks, discarded underwear, old beer cans, stale pizza crusts and cast-off wine bottles… just sort of nestled down there… and what a horrible ‘broken-glass-crash’ when we finally tacked over towards New Zealand!

This whole ‘heeling thing’ is a pain in the butt—-especially if you’ve ever visited the head at 45 degrees of heel while pounding to windward!

A leak on a civilized power boat mostly drips DOWN, but a single cabin leak on a sailboat can drench tens of thousands of dollars in electronics within a few damn, damp moments… through the miracle of ‘effective heeling water dispersal!’

If you love this, you’ll love: How to Swear like a Sailor

If all this wasn’t bad enough, heeling is slow and EXCESSIVE heeling is even slower. So sailboats have very heavy (and expensive) lead keels to keep them upright.

Alas, heavy is slow too. So modern racing boats spend millions of dollars on lightweight hull materials such as Kevlar, spectra and carbon… so they can carry their very heavy, very expensive keels around the racecourse even faster.

Does this make sense?

Actually, nothing about sailing seems to make sense. Why do people do it? Self-hatred? Masochism? Guilt? I now realize that Benjamin Franklin was exactly right when he said, “Anyone with enough intelligence to get themselves thrown in jail will never go to sea…”

My wife Carolyn can’t seem to understand why sailboaters have to spend SO much money to suffer. “…can’t we just sell our boat—-put Wild Card on the market—-and, when she sells, just take the cash and… buy crack? I mean, wouldn’t it be cheaper? Less painful? Healthier?”

Why do people live aboard sailboats? They are usually very narrow and extremely low. (I mean the boats, silly). Many sailboats don’t even have full-standing headroom—-which is why so many old sailors are hunch-backed (from stooping) and balding (from scraping their heads)!

…which brings me to my favorite oxymoron besides ‘military intelligence’… which is, ready for this? “HI-TECH SAILBOAT!”

Okay, granted the first ‘yacht racer’ was a relatively bright guy. He was drifting down a river with a few of his caveman buddies, and, while standing up to relieve himself… expansively opened up his large fur vest… and noticed a slight increase in boat speed.

Okay, that was a huge ‘leap’ of progress THEN… but why no advance SINCE?

By any measure, sailboats are less suited for living aboard than powerboats—-and yet 99% of live-aboard vessels are sailboats and their wind-crazed, sun-addled owners somehow consider themselves smarter than their ‘gear-head’ putt-putting counterparts.

Where is the logic?

The disadvantages of a sailboat are almost too numerous to mention. Take, for example, those very expensive ‘white floppy things.’ Yes, modern hi-tech sails are expensive. Anyone who says that ‘wind is free’ crap hasn’t seen a contemporary sailmaker step from his Rolls Royce into his mansion/loft lately.

Worst, sails are attached to booms… long, heavy deadly bats which exist solely to 1.) Knock you overboard, 2.) Bash your head open, 3.) Both.

I Love Boats – There is Life after Sailing after All

‘Running rigging’ is called that because any sensible person runs from it. I mean, it is always whipping around, fouling itself, and getting tangled.

Jib sheets are the worst. If a headsail rigorously luffs for more than a couple of seconds, the jib sheets will tangle themselves into something resembling ‘hanging nooses,’ loop themselves over your startled head, quickly settle on your delicate neck, and slowly/slowly/slowly begin to tighten.

Sure, a power vessel might blow up and instantly kill its crew… but sailboats are sort of into S&M… slow, delicious torture!

It is not only the boats which are different, it is their skippers too.

Powerboaters, for example, are free-spenders. Sailboaters are the cheapest guys imaginable. (I’ve been on a 100-foot plus mega-sloop worth mega-millions… aboard which the ultra-rich owner individually scissors each sheet of toilet paper into quarters… so as to ‘waste not, want not!’)

Have you ever read a copy of the Seven Sleaze Cruising Association (SSCA) newsletter? Every entry says, “We’re here… but it is cheaper somewhere else… so we’re heading out!”

Yes, ‘east is east and west is west’ and never the twain shall meet.

Powerboaters are exactly the opposite. They come down to their Bertrams, Posts and Hatteras’s, sniff the exhaust gases for a couple of mind-numbing minutes and then bellow, “… let’s find a large aquatic creature, drag it around behind our vessel with a sharp hook, jab holes in it with our gaff and then allow it to slowly suffocate in our cockpit while we photograph the slaughter!”

I mean, at least power boaters are unabashed! Not so, their completely-in-denial ‘ragmen’ counterparts! Many sailboaters pretend they don’t have an engine, don’t have a gen/set, don’t have dis and dat… that their whatchamacallit literally doesn’t stink!

What is it about sailboaters that make them so ‘holier than thou’ and, at the same time, so ill-suited for the role? I mean, the last honest sailboater I met (actually, the ONLY one in a couple of decades) asked me, “… at how many RPMs do you sail?”

The bottom line: my wife and I have decided our ‘retirement home’ will be a powerboat and we are currently in the process of deciding which one.

“I’d like one with a noisy, smokey engine,” my wife suggested and I chimed in with, “…yeah, a high-freeboard, tubby, diesel-gulping thing which leaves an extremely large wake!”

“…rock and roll, suckers!” I cried gleefully as I high-fived her.