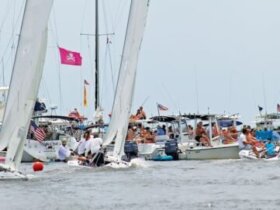 Revelry Abounds at the Rockville Regatta

Lionfish look beautiful in an aquarium, however they can prove deadly to humans as well as ecosystems. Since being released into the waters off Florida in the 1980s, this colorful fish has expanded throughout the Caribbean and is now making its way up the eastern seaboard. With no known predator, lionfish have begun to outnumber or replace native fish species. Warm water, especially in winter, has allowed this fish to migrate as far north as North Carolina. Climate change, due to global warming, may be the reason.

North Carolina reefs are important to study because they occur in a temperate-tropical transition zone and act as a boundary for temperate and tropical species, regulated by the Labrador Current and the Gulf Stream. In this north/south migration area, food is available and reproduction occurs. Theoretically, when the seasons change, the migrations should reverse. However, water temperatures have changed in favor of the lionfish ability to establish new territories.

The University of North Carolina Wilmington and NOAA compared 40 fish species communities at different temperatures and depths during summer and winter months. Results of the data collected during a six-year period were published in the September 2014 issue of Marine Ecology Progress Series. The findings report declining native fish populations, alien species successfully competing for food and habitat, and warmer waters extending the natural range of all fish. Large numbers of lionfish, along with tropical reef fish, angelfish, and wrasses, are now the “ecological indicators” signaling major environmental changes.

The study found lionfish, being temperature dependent, like waters warmer than 57°F, as waters cooler than 58°F will drive them away. In winter, they were most abundant at 64°F. Further, as seafloor depths increased from 87-150 feet, temperatures rose and the lionfish population increased at least tenfold. It also predicted as the nearshore communities experience warmer temperatures, more lionfish would appear.

“Lionfish may prove to be one of the greatest threats of this century to tropical Atlantic reefs,” wrote NOAA ecologist, James Morris, Ph.D., in NOAA news online. “As the first reef fish invasive species to this region, lionfish have clearly demonstrated the vulnerability of Atlantic reefs to marine invasions.” Reefs do not repair easily or quickly, therefore if the lionfish destroy them, it may take decades before they fully recover, if at all.

North Carolina estuaries are also in jeopardy of climate change and alien invasions. This system of marshes, mudflats, oyster reefs, seagrass and mixed grasses lies between the shoreline and its barrier islands. Here, water transitions between salt, fresh, and brackish waters. The estuaries provide safe havens for many animal varieties and each specie has a preference. Estuaries also provide nursery areas and feeding grounds, so changes in water temperature and encroaching tropical populations could be devastating. Invading fish will disturb habitats, compete for food, and eventually disrupt recreational and commercial fishing.

Once alien species are established, getting rid of them becomes difficult if not impossible. For lionfish, the eradication process is ambitious, inventive and ongoing. To protect and conserve delicate environments, there are paid and volunteer removals, fishing derbies, catch-and-eat tournaments, and commercial removals for restaurant menus, fish food, aquarium use, or jewelry. This vigil may be the only way to reduce the lionfish’s impact, but it doesn’t seem enough.

It’s unknown how warming waters will eventually affect offshore reefs or estuarine populations. If the transition zone moves northward, the problems seen in North Carolina will move to Virginia and Maryland to the Chesapeake Bay, the largest, most productive estuarine system in the U.S. In the meantime, researchers continue to monitor lionfish, other tropical species and native fish populations, identify environmental changes and try to predict the impact on species and habitats in the future.

Helen Aitken is a writer and photographer from eastern N.C. who loves classic wooden boats, “backyard” boat makers, coastal areas, and contributes regularly to All At Sea Southeast magazine. Visit her website at www.helenaitken.com.