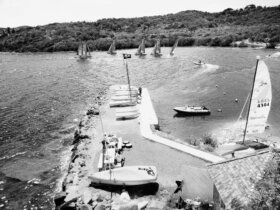 It can be quite calming to see beautiful fish swimming in an attractive aquarium just as it can diving and watching those same fish gliding across a reef. However, there is one fish now found in both places, causing great alarm and destruction – the lionfish. This ornate predator, native to the Pacific Ocean, has spread to waters all over the Southeast United States, the Bahamas, the Caribbean and even down into Central and South America. The spread has been swift and destructive, creating a real threat to native marine life.

The lionfish is small, a pretty addition to any aquarium but poses a big threat to native species. Of over 20 different species of lionfish worldwide, only two, the Pterois miles and P. volitans, have taken up residence in this part of the world. These two species look identical, can grow to a maximum size of 19 inches and they live for many decades. They like structure but are not picky about their habitat. They have been found in inshore waters, mangroves, mud flats, offshore reefs and have been observed in waters over 1000 feet deep. Versatile, and with no known predators here, they dominate.

Where did the Lionfish Come from?

Elizabeth Underwood, the Lionfish Program Manager at the REEF Environmental Education Foundation located in Key Largo, Fla., a leader in the promotion of lionfish awareness, says it has been determined that the infestation started back in 1985 in the waters just off Dania Beach, Fla., where some aquarium lionfish were released into the waters. The sudden increase in population is easily understandable in light of the fact that reproduction can occur  when the fish is less than a year old. Spawning in pairs the females can lay up to 12,000-15,000 eggs roughly every four days for a total of over 2,000,000 eggs a year. Unlike other fish eggs which drift off in small clumps or alone and can be picked off easily by hungry predators, the lionfish eggs are held together in a gelatinous mass and drift on the surface in the currents. Any predator eating these eggs discovers a foul taste due to a toxin in the mucus mass.

there is hope for some control of the lionfish populations

When lionfish mature they remain relatively safe. Some sharks, grouper and barracuda have been observed taking already speared or captured lionfish, but they were in obvious distress after eating. Lionfish dorsal and pectoral fins contain a toxin that can cause pain and discomfort in humans. Underwood, stung by a lionfish while studying them, says it is extremely painful and caused discomfort for days. She explains native fish have not evolved to be wary of the lionfish and end up being easy prey. A recent study indicated that patch reefs where lionfish had established presence suffered up to ‘a huge decrease’ in native prey fish. Projecting possible populations of lionfish of over 200 per acre consuming over 70 species of marine life, it’s not hard to see how this current infestation is a real and growing threat.

After the initial population growth in the waters of Dania Beach, lionfish spread up the coast, following the currents. By 2000 these fish could be found in the cooler waters of North and South Carolina and Virginia. In 2004 they were found spreading through the Bahamas. In 2007 rapid expansion throughout the Caribbean was recorded. Riding the currents of the Caribbean back to the Keys they infested the waters there. Lionfish are now spreading through the Gulf and down through Central and South America. Underwood explained it is important to know the lionfish spread has been dictated by marine currents and the young lionfish tolerance of waters as cold as 50 degrees. They can spawn and send their enormous amount of eggs off into the currents before dying off.

Fortunately new studies are proving there is hope for some control of the lionfish populations. The patch reef study showing the decimation of native fish also showed those prey fish populations actually recovering by as much as 70% when the lionfish were partially culled and removed. Underwood presents a caveat, however, “It’s just like weeding a garden. It has to be constant.” Diving any of the popular reefs such as Alligator Reef in the Keys can help control the lionfish population and keep the native species unthreatened.

Underwood warns of a disturbing trend occurring in certain areas where divers are trying to “train” predators to eat lionfish. What is happening instead is the predators are learning that divers equate to a free meal and are becoming more aggressive. The only effective control at this point is culling the lionfish.

Lionfish are delectable eating, easily prepared and likened to hog snapper in flavor and consistency. Maybe with recent and upcoming relaxation of harvesting regulations, lionfish can become a desired catch rather than an environmental threat. There are many organized lionfish derbies and harvests taking place all over the United States. To find out about these go to www.REEF.org. By getting involved you can help reduce the effect of this threat to our waters.

If you want to EAT Lionfish: