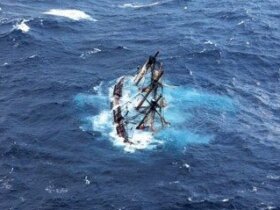 The Strait of Dover, the narrowest point in the English Channel, was shrouded in thick fog on January 11, 1971 when the tanker Texaco Caribbean was struck by the freighter Paracas. The collision caused the tanker to explode, split in two and sink in shallow water with the loss of eight lives and the discharge of 600 metric tons of bunker oil.

Trinity House, responsible for lightships and buoys in England, immediately placed a buoy with three vertical green lights to warn other vessels of the wreck. However, the very next day, the freighter Brandenburg struck the wreck of the Texaco Caribbean and sank causing the death of 21 more seafarers. A lightship and five more lighted buoys were added to warn shipping of the two wrecks, but to no avail. At the end of February, another freighter, Niki, hit the submerged wreck and immediately sank with the loss of all 22 crew.

To mark the site of the three wrecks an additional lightship and ten more buoys were placed on station. For the following two months, 16 ships ignored or misunderstood the lightships and buoys. Fortunately, there we no further collisions or loss of life. But these incidents prompted the IALA to take action.

The International Association of Lighthouse Authorities (IALA), was founded in 1957 as a non-profit technical organization to coordinate improvements in visual aids to navigation throughout the world. After the loss of these 51 lives in the Dover Strait, IALA realized that with 30 different buoyage systems being used around the world, few mariners understood the different meaning and varying use of aids to navigation in these multiple systems.

IALA was unable to settle on one buoyage system for lateral marks, so it recognized two systems in different parts of the world, known as Region A and Region B. Region B includes North and South America, Japan, Korea and the Philippines, while Region A is the rest of the world.

Lateral marks indicate the port and starboard sides of the navigation route to be followed into a waterway such as a harbor, river or estuary from seaward. The vessel should keep port marks to its left and starboard marks to its right. These marks are represented by cone shaped or cylindrical shaped buoys. If the buoys or beacons don’t have either necessary shape, they should use an appropriate topmark.

In both Region A and Region B, the starboard hand marks are conical and the port hand marks are cylindrical, it is just the color schemes that are different. Region A uses green for starboard and red for port aids. Region B reverses the colors and uses red for starboard and green for port aids, giving rise to the familiar phrase “red, right, returning from sea”. If lit, the light is the same color as the mark, but can be of any rhythm. In the United States as late as the mid-1970s, the port hand side of the channel was marked with black can buoys rather than the current green color of the harmonized Region B.

At the point where a channel divides, a modified lateral mark is used to indicate a ‘preferred’ channel (often a deep channel suitable for commercial vessels) on one side and a secondary channel on the other. A preferred channel is indicated by red and green horizontal bands on the lateral marker. If a vessel wants to use the ‘preferred’ channel they observe the top color of the mark”, while a vessel wishing to use the secondary channel honors the color of the band below it. If lit, a preferred channel mark assumes the color of the upper band, with a rhythm of composite group flashing (2 +1).

When entering an unfamiliar port or cruising area, whether in Region A or Region B, a prudent mariner will always inspect their chart beforehand to determine and confirm the direction of buoyage, just to be make sure there are no surprises.

Capt. Jeff Werner is a 23 year veteran of the yachting industry. In addition to working as a captain on private and charter yachts, both sail and power, he is a certified instructor for the RYA, MCA, USCG and US Sailing.