Sailing, sports fishing and seaside celebrations are what made the 48th Bonaire Sailing Regatta and Festival, held October 7th to 10th, so special. Over 115 participants from Bonaire, Curaçao, Aruba, Venezuela and Holland competed in classes such as Racing, Optimist, Sunfish, Beach Cat, Windsurfing and Kite surfing. New this year was the addition of a Wahoo fishing tournament. A change in venue plus appealing program of events attracted some 5000 people over the three days of regatta festivities.

“This year’s regatta was totally different from the past because we changed the venue from downtown Kralendijk to Coco Beach, the former Sunset Beach. Both sailing races and the festival were held from this beach, located a little north of city center,” says regatta director Viktor Wijnand. “Because the races where held in front of the beach, a lot of people came to watch the races, which took place between Bonaire and its remote island of Klein Bonaire.”

Sailboat racing was the biggest draw and there were plenty of opportunities in the two racing classes for seasoned sailors and newcomers alike to triumph. 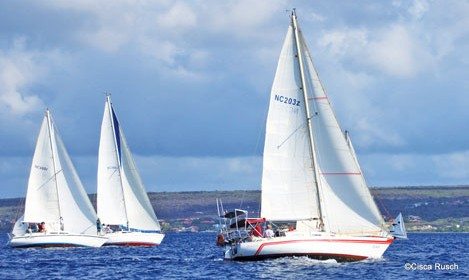 “I’ve sailed in this regatta since 1972 and what I like best is the fantastic ‘flat’ waters in the huge protected bay of Bonaire,” says Jos Schoonen of Curaçao who, with his crew, won the Racing 1 Class aboard the Swan 44, Casse Tete V. “The courses were attractive for both small and large yachts, although three races a day are kind of tough for us as senior racers. Sailing conservatively due to the strong winds, a very well maintained older racing Swan, and a very experienced crew led to our success.”

It was a crew of 14- to 19-year-olds from Curaçao and their skipper, Henry Hernandez, aboard the J/24, Chamba II, that took home the first place prize in Racing 2 Class.

“Every year we go to the Bonaire Regatta with a group of Sea Scouts. This was the first year this crew sailed without their skipper, Jan Ackermans, who passed away in May. The boys and girls wanted to do something to honor him and I was fortunate to guide them in doing this,” says Hernandez, whose Chamba II team won five of seven races to champion the class against the fellow Curaçao J/24 team on Merlin. “I enjoyed this regatta very much because it is a sailor’s regatta, where you could play the shore or decide to go left or right.”

Seven boats participated in a first-time one-day Wahoo Tournament organized by Budget Marine and offered as part of the regatta program. Captain Yuri van Kampen, who professionally charters his 30ft Pursuit, Fishtales, won with a catch of a 13.2lb wahoo.

“We had just set out a ballyhoo on the inside right outrigger, when immediately we stopped the line from free spooling, it was slammed by the wahoo,” tells Van Kampen. “I set the hook and the battle began until we soon had it in the fish box. Three hours later we found out this was the only wahoo caught for the day. Winning with just one wahoo might not seem a big achievement, but to us it meant the world since we produced where no other boat could get a bite or a hookup.”

When sailing and sport fishing finished, crews were able to moor their boats in front of Coco Beach in order to attend the finale party. This included live music from local and international bands, dance shows and other cultural events.

“The ambiance was relaxed and enjoyable,” says Wijnand. “It was definitely a regatta to remember!”

By Cruise Ship to the ABC Islands