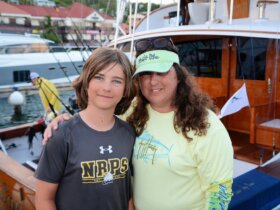 The gals had a chance to get even, but the guys got head by winning the St. Croix Golden Hook Fishing Club’s 14th Guy/Gal Tournament for the eighth time. This ‘reel’ battle of the sexes, held October 5 and 6 out of St. Croix Marine in Christiansted, attracted eight boats, nearly 50 anglers and many more spectators who came to watch the weigh-in.

The guys fished the first day and collectively caught a whopping 415.2lb of fish. It was the gals turn the second day and they put only 268.4lb of fish on the scales, or enough to give the guys the win by 146.8lb.

Meanwhile, the competition for the Overall Top Boat prize was much closer. Living the Dream, a Hatteras 65, won with 163.7lb caught over the two days, just 2.4lb greater than second place finisher, Turn & Burn, a Deep Impact 40, with 161.3lb.

“The first day we took a straight shot to the south shore and started working our way west,” explains Capt. Austin Schneider, at the helm of Living the Dream. “Within the first two hours we caught two wahoo. Adam Majchrzak caught the first, a 26.7-pounder, and AK Lovarco the second, a 19.1-pounder.”

The bites slowed down after that and Schneider cruised to the north side of the island off Salt River where angler Rodrigo Fass released the team’s third wahoo, an eight-pounder. Ironically, the anglers on Turn & Burn, who shares the same owner as Living the Dream, pulled up right next to them and added another bigger catch to their score. Turn & Burn ultimately finished Top Boat for the guys’ day with nearly 20lb more fish than Living the Dream. The Turn & Burn guys didn’t get to savor their success for long.

On the second day, Schneider again headed to the south shore where the gals hooked up a triple-header right off the bat. Sara Ridgeway and Darby Kirby reeled in their 20-something-pound wahoo, while Chelsea Harris lost hers after a good fight. There were more barracuda than wahoo in the water, yet Ridgeway managed to catch a 22.7lb wahoo just after noon.

“I heard over the radio that Turn & Burn had a good morning out west,” Schneider explains, “so, I headed there and we were able to catch two more good sized wahoo.”

Kirby released a 21-pounder, followed by a 25-pounder caught by Robyn Finch. The gals’ total catch of 110.2lb earned Living the Dream the Best Boat on the Gals’ day, a feat now repeated two years in a row. Combined with the guys’ catch, Living the Dream also earned the Overall Top Boat prize.

“Persistence, patience and positivity, that’s what led to our success,” Schneider explains. “For us, it’s all about the fishing. The girls especially had a blast and it was great to win too. We had a total of 17 people onboard, so our anglers had a big cheerleading section.”

In biggest fish prizes, Steve Smith on the Topaz 26, Two Fer Sure, won with a 46.2lb wahoo.

“We fished the southwest corner off Sandy Point,” Smith tells. “I caught the big one around 8:30am. After that we had to move because it started raining and lightening, so we didn’t get to work that area as much as we would have liked.”

Sports fishermen and the public were treated to a Saturday night fish fry. Local charter captain Thomas Daley who recently starred on The Travel Channel’s Bizarre Foods show, cooked up his famous shellfish as well as other types of fish such as grunts and doctor fish.

The Golden Hook Fishing Club concluded its five tournament series in November with its Wahoo Tournament. For information on the 2014 series, visit: www.fishstx.com

What to Know about Transient Slip Space in the Caribbean

Does all this add up to transient slips being at a premium in Caribbean marinas?