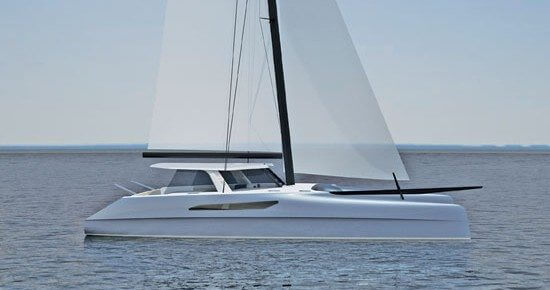 How many time have you heard, ‘If we can just get manufacturing jobs back in the U.S.A., we can get this economy turned around’? In North Carolina, Governor Bev Purdue is committed to getting people back to work and creating a strong business climate where manufacturing can thrive in a global market.

When Gunboat began searching for a U.S. location to build their 55 Series catamaran and the Pure Yachting carbon-fiber rigid inflatable (RIB), it was North Carolina who jumped at the opportunity to bring those jobs to their state.

In July 2011, Gunboat closed their South Africa facility and began full production at their new state-of-the-art facility in China. As labor costs continued to rise in China, the company began looking at options in the United States. Wanchese, NC, known for quality boat building of sportfish yachts, quickly became the front-runner. The old 30,000 square foot Buddy Davis Yachts facility could accommodate the wide-beam catamarans, plus the area already had a strong skilled labor force ready to get back to work at very competitive wages.

The state has a program called the ‘One North Carolina Fund’, which gives the North Carolina General Assembly the ability to attract companies who want to either expand or locate new business in the state. The $213,000 grant was the nudge Gunboat’s founder and CEO Peter Johnstone needed to seal the deal. Since the formal announcement in late January there has been no looking back for either side.

Gunboat began work at their new facility on March 1st with 12 employees. As production ramps up, they expect to employee 71 people total.

According to Peter, “Early work is focused on producing the molds for the exciting new Gunboat 55 series that will commence production in June.” He added that, “So far, our brief experience working in the USA is excellent. It is a pleasure to draw upon a skilled and motivated workforce with supportive government!”

Over the next three years Gunboat will invest $1.8 million in Wanchese.

North Carolina will also be building a 40-foot-wide launch ramp at the facility. Not only will this help accommodate the future production of the Gunboat 78 Series, with a 33-foot beam, but it will also give the new boatyard the ability to haul, launch and sea trial their boats as well as to provide service year-round.

Gunboat has already experienced true southern hospitality. Peter explains, “Everyone at Gunboat has experienced unsolicited welcome calls and emails. The hospitality in NC is exceptional. I cannot imagine a nicer or warmer welcome.”

Terry Boram writes regularly for All at Sea Southeast.