Galley Wars Heat Up at FLIBS 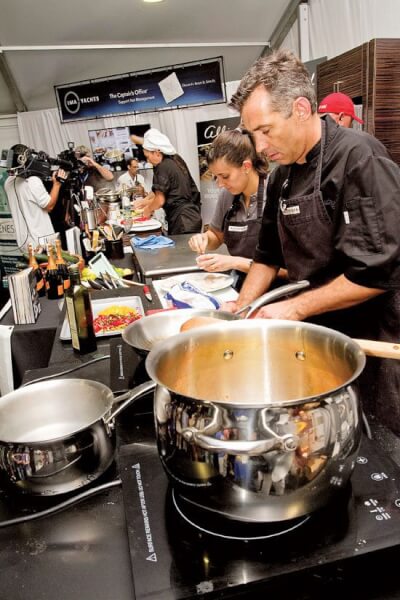 The “Italian Guy from the Neighborhood,” local restaurateur and celebrity chef Steve Martorano, took the stage to “referee” and emcee at Galley Wars during the Fort Lauderdale International Boat Show in October.

Top yacht chefs in four teams battled it out to become the star of the first incarnation of what could be come an annual event organized and presented by gourmet catering guru Beverly Grant, director of IMA Yachts Crew Solutions.

The first round of Galley Wars was between Chef Christopher Cantrell of M/Y Lady Nancy and Brent Marcus Ryals of M/Y Mr. Terrible. Second round pitted Chef Zachariah Rath of M/Y Cocktails against Michael Martin M/Y Harbor Island. Teams had 30 minutes to prepare a culinary masterpiece from when they received their mystery ingredient. The battle was on!

Final round were the two winners – Ryals, assisted by chief stewardess Jacey Sornetta and Martin assisted by stewardess Luiza de Souza. When the cover was pulled to reveal the final mystery ingredient, all went quiet – two live, beautiful baby bunny rabbits! Yes, it was a joke!

The final mystery ingredient: tripe – the best the judges had ever tasted! And I would, know because I was one of them. Other judges were Sabrina Farmer, Luda Broich, Michele Leung and TV personality Trina Robinson.

And the winner was Michael Martin. Martin’s culinary training started in Melbourne, Australia, at Stephanie’s Restaurant of fine dinning, followed by French and Italian restaurants. Michael traveled throughout Europe and joined the yachting industry in 1997, working the Mediterranean and Caribbean seasons, and loving it.