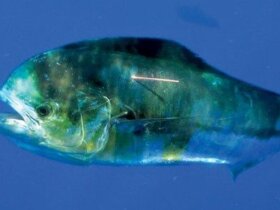 Dolphinfish Come to the Screen in ‘A Journey Pelagic’

August is the month that separates the true fishermen from those who only claim to be. You really have to pull out all of the stops when fishing during this month. The old saying the “Early bird catches the worm” really comes into play during this month. It’s best to fish early, because when the sun gets straight up the fisherman frying process begins.

Inshore Action
Red fish, spotted sea trout, flounder, whiting and sharks can be caught just about anywhere while fishing the sounds and beachfronts. The best baits are going to be the lively ones such as shrimp, mud minnows, finger mullet and small yellow tail.

The reason live baits are a good idea is that they do all the work for you. This just means their movement while rigged up gets the fish’s attention. All you have to do is cast rigged bait into the strike zone and possibly re-adjust the float’s depth, but only if no hit occurs after “the float by” takes place.

A lot of fishermen like float fishing and, since I am a fisherman myself, I can tell you why this is a natural born fact: We all just love to see the sinking of the cork!
The best news about these baits is most of them can be caught by you. There is more good news – it’s also a good time to catch your own bait, and you might just have enough left over for supper.

The secret to casting and catching shrimp, which could also turn into an afternoon shrimp cocktail, is a simple one. I suggest working the grass line as the shrimp first come out on the falling tide and when they start heading back to the safety of the marsh on the rising tide. I also suggest making sure that the grass line that you are working has a mud bottom around it.

For those that prefer to use “artificial only,” bites can also happen. I always like using DOA shrimp patterns during this time. You can use them as rigged straight out of the package.

Best method here is to tie a 3- to 4-foot leader of 12- to 20-pound test to a popping cork and cast into place. Let the tide take the float and come up with your own popping the float sequence. It’s best to fish this rig in 5 to 6 feet of water.

When fishing more than 6 feet of water, I suggest using a small adjust float rig with a 2/0 Kahle hook. Remove the DOA weight and hook from artificial shrimp pattern and balance them on your hook just like a shrimp.

Near Shore Options
Ocean menhaden, also known as porgies, have arrived and can be caught while casting your net around beachfronts and as far out as three miles into the ocean. The secret to finding porgies is to keep an eye to the sky for diving pelicans. Menhaden are called “Pelican candy!”

When using live menhaden, I suggest light tackle rigs made with stinger hooks fished around the beachfronts and shipping channels. Big kings are known for migrating into these areas during the month of August. Steep drops such as those located in shipping channels (Savannah River Channel, for example) hold lots of bait standing opportunities.

King and Spanish mackerel know how this feeding drill works. Slow trolling in these areas usually yield big king mackerel bites. If you see Spanish mackerel on the surface, it’s very likely that large kings are holding in the outskirts. Another good baiting option is to catch Spanish mackerel, rig it up quick, and let it swim.

Bottom Fishing Fun
The bottom bite at the Savannah Snapper Banks is good during this time. However, to catch big fish you have to use the right big bait. Larger fish such as grouper, red snapper, cubera snapper, amberjack and cobia want live bait.

A fishermen needs to use live baits such as menhaden, sand perch, rock bass, scup, pin fish and ruby red lips. It’s best to make sure your live well circulation pump is working properly and that the filter is clean. You want your bait lively and not shocked (stressed with a white milky appearance).

I suggest lip hooking any of these bait with a 13/0 circle hook rigged up on a Carolina style rig. As far as weight, I always use an 8-ounce egg weight and an 8- to 30-foot 100-pound test monofilament leader. Send this rig to the bottom, where the weight anchors it down. This allows the bait to seemingly swim free, putting it right in the big fish strike zone.