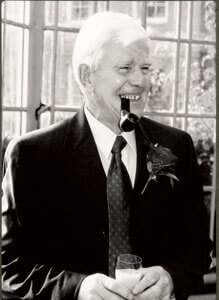 He became a master mariner at a young age and in 1960, and recently married, he decided to move to the British Virgin Islands. He quickly found work as a boat and ferry captain and before long he identified the demand for imported food and a retail grocery business. Road Town Wholesale Ltd was born.

In 1967 the need for his own vessel for reliable shipping to the BVI became paramount so the company bought an old 60-ft wooden cargo boat, the MV Kilros in the UK and motored it across the Atlantic, a challenging feat at the time.

Captain Oriel Blake Talks to All At Sea’s Carol Bareuther

Over the following 50 years the company expanded to five supermarkets and in 1986 a shipping business, Island Shipping, was incorporated.

Peter’s passion was always sailing and the sea. His own yacht, Pipedream, was often at the head of the leaderboard in local regattas throughout the Caribbean. He was influential in creating the annual BVI Spring Regatta which remains one of the foremost regattas in the region today. He was elected Commodore of the Royal BVI Yacht Club no less than thirteen times.

One of Haycraft’s enduring character traits was his philanthropy. Always eager to promote sailing in the BVI’s youth he helped provide equipment and expenses for promising youngsters to partake in the sport and take part in events. After the devastating hurricanes of 2017 he contributed substantial funding to the rebuilding of the Enis Adams Primary School into a modern and state-of-the-art facility.

In 2020 Peter was awarded an OBE by Her Majesty the Queen for services to the British Virgin Islands.

Peter and his wife Penny made the BVI their home from 1960, raised three children and enjoyed 62 years of married life. He is survived by Penny, son Chris and daughters Susan and Julie.

Julian_Putley
Julian Putley is the author of ‘The Drinking Man’s Guide to the BVI’, ‘Sunfun Calypso’, and ‘Sunfun Gospel’.
RELATED ARTICLES
Life