Move over Hawaii, Bermuda and even St. Thomas. The Dominican Republic is the new hot spot for some of the best billfishing in the world. Consider that eighteen boats released a total of 132 billfish – 14 blue marlin, 116 white marlin and two sailfish – in three days of fishing in the 2013 International Cap Cana Billfish Shootout. What’s more, last year’s spring season at Marina Casa de Campo closed with the release of 621 blue marlin.

It’s the blue marlin that brought Lighthouse Point, Florida angler, Michael Brauser, owner of the 87ft Spencer, Betsy, to the Dominican Republic. “The first time was 2006. We stayed there for a year or so and caught several hundred blue marlin before heading to Venezuela,” Brauser explains. “I returned to the Dominican Republic when I commissioned Betsy in 2012. Again we had phenomenal fishing. In 18 months or so we caught nearly 400 blue marlin.”

The billfish have always been here but not many people knew it, claims Rick Alvarez, of Miami, the Florida-based owner of International Billfish Tournaments, Inc., who started the four-year-old International Cap Cana Billfish Shootout, set for May 24 to 31, and who will kick-off the inaugural Casa De Campo International Blue Marlin Classic, March 20 to 24. “In Punta Cana or Cap Cana, nobody thought of the fishing season as other than during the time of school vacation. Local anglers who owned summer homes in the area brought their boats up from Santo Domingo on the southern coast in late spring and early summer and stayed until late August. With the arrival of international visiting sports fishing boats, some decided to come earlier and fish longer. It’s led to the discovery that the fishing seasons are actually longer and more productive than originally thought.”

What enabled the international sports fishermen to test these waters has been an increase and improvement in infrastructure in the form of world-class marinas.

For example, the 100-plus-slip marina at Cap Cana, just south of Punta Cana, use to be much smaller. “Now,” explains Capt. Miguel Tirado, who runs the 58ft Hatteras, Bluebeard, and moved to Cap Cana from Puerto Rico last year after traveling to fish in Dominican Republic waters for several years, “it’s an awesome facility with security, restaurants and the airport nearby.”

Captain Neil Orange, who is based at the 350-slip Marina Casa de Campo and runs the 72ft F&S Boatworks, Bandolera, tells, “I first came to the Dominican Republic in 2010 when I was running the Sandman. We stopped here on the way to St. Thomas to check out the marina facilities. They were great. We came back the next year and stayed for the season. The fishing was unbelievable. That means six to 12 or 15 white marlin on a good day and the same number of blues.”

The fishing grounds off Cap Cana consist of a series of undersea mounts starting about seven miles off the marina inlet. The waters here, around the easternmost point of the island, attract billfish that come to feed on the teeming schools of baitfish that in turn feast on nutrients churned up by the currents off the Mona Passage. Off Casa de Campo, on the island’s southern coast, there are several F.A.D’s (fish attracting or aggregating devices) 25 to 40 miles south offshore.

More than a dozen boats are expected to fish this month’s Casa De Campo International Blue Marlin Classic. The results will add even more to the knowledge of the Dominican Republic’s productive sports fishery. Left to explore is the billfishing out of Ocean World Marina in Puerto Plata on the north coast of the island. Here, there is a great sailfish bite during the winter months and maybe the opportunity to raise unbelievable numbers of marlin too. 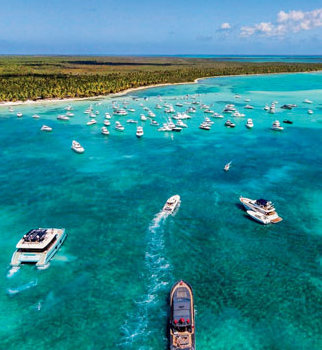